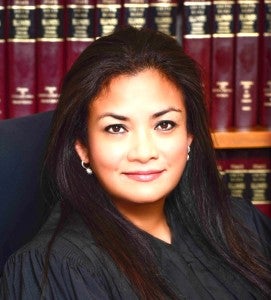 CHICAGO—The first Filipino American elected judge in Illinois was indicted by a federal grand jury for mortgage fraud April 12. The news hit the local community like a thunderbolt.

A celebrated and much-admired civic leader, Jessica Arong O’Brien, 49, was removed from the Cook County First Circuit Court as a judge for the small-claims court and was transferred to non-judicial work like officiating on marriages.

O’Brien’s rags-to-riches life story became a staple for media coverages, earning her accolades and awards from prestigious organizations. She also turned, for a while, into the mini-celebrity to be invited to deliver inspirational talks before professional and educational institutions.

Further, federal prosecutors alleged that she and Bartko omitted in their loan application a $260,000 loan that they owed on another property they had previously bought.

Jessica Arong O’Brien came from Cebu to America at the age of 16. She has a bachelor’s degree in hotel and food administration from Boston University. She landed a top managerial position with a multinational company supervising thousands of employees involved in food preparation.

In 2008, she decided to change her career and later earned a Masters of Laws in Employee Benefits and Taxation from the John Marshall Law School in Chicago. She became the first Asian-American president of the Women’s Bar Association of Illinois in 2015.

According to the website, Diversity Scholarship Foundation, where she was a board member, “Judge O’Brien is a contributing editor for the Chicago Daily Law Bulletin and has a column entitled, ‘Making It.’ The purpose of her column is to inspire readers of people’s journey to success. The foundation has been giving scholarship to law students from various ethnic communities.

Later, she won former “President Barack Obama’s Call to Service Award in recognition for her more than 4,000 hours of volunteer service over the past decade,” according to an online biography.

O’Brien has served in roles where she oversaw prospective lawyers and helped select judges, including a term on the Illinois Supreme Court’s “Character and Fitness Committee,” which examines candidates who apply to join the state bar.

In a 2016 profile on O’Brien for ABC-Channel 7, her boss, Judge Timothy Evans, called O’Brien “open … optimistic … tenacious” and “committed to justice,” adding “we want to see more like her.”

O’Brien is to be arraigned at 10 a.m. (CST) on Thursday, April 20 before U.S. Magistrate Judge Sheila Finnegan.  An executive review board headed by Cook County Chief Judge Timothy Evans with 17  Cook County judges as members, will subsequently decide if O’Brien be removed as a judge.

In another irony for the local community, the Fil-Am Lawyers Association of Illinois which O’Brien co-founded and headed, was holding a seminar on “How to avoid investment scams” on April 12—the day when she was indicted.

Efforts to get comments from Judge O’Brien and from her colleagues went unheeded. Other Filipino Americans expressed shock but many hoped that Judge O’Brien will emerge from this disturbing development in her life as an even better person.

Israel Desierto is another Filipino American judge at the Circuit Court in Cook County. Unlike, O’Brien, Judge Desierto was appointed to his position.