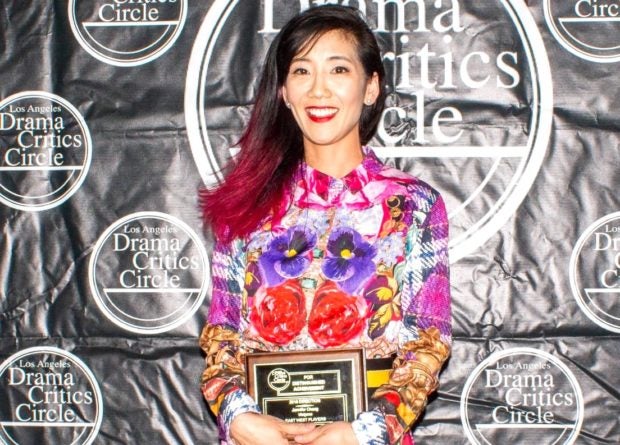 The award’s 50th annual ceremony was held at Pasadena Playhouse.

“I am so thrilled that the members of the LADCC came out to see ‘Vietgone’ and felt compelled to mention so many folks on my team in the nominations,” she says.

“I think it’s great that EWP is getting attention for the work and it’s truly an honor to be recognized by the LA community amongst such a talented cohort.”

“I feel encouraged to keep working … it is so nice to hear a ‘keep doing what you are doing.’ Art is so subjective, but the sensation of having what you need to say being heard is absolutely validating.”

Chang describes directing Qui Nguyen’s “Vietgone,” about two Vietnam War refugees who fall in love at a relocation camp in Arkansas, as a labor of love. “The work was extremely challenging but the entire cast and crew were absolutely devoted.

“There were technical issues that we continued to work out throughout the preview performances, but the fact that everyone would stay late and or come early to rehearse on their own and that designers would borrow and beg for equipment to augment the needs of the play because everyone believed in the project—it was so moving.

“I am always feeling like I am falling short but I had the belief of my cast and crew. That is such a beautiful gift. The experience has bonded us deeply to each other.”

Chang did not set out to be a director. “I kept getting nudged because there just wasn’t anyone else,” she reveals.

A San Francisco-native, Chang studied drama and psychology at New York University before taking up a master’s in acting at University of California-San Diego—where she is currently head of its undergraduate acting department.

“In grad school, my class of directors, designers, playwrights and actors all had to take a dramaturgy class with Shirley Fishman. We ran out of directors for scenes we were studying.”

Chang volunteered to direct and the experience encouraged her to join directing classes. “I then had the opportunity to assist Darko Tresnjak, who continues to be a dear mentor, because there was only one other apprentice director and, again, no one else asked!”

In 2008, Chang cofounded Chalk Repertory Theatre and served as its artistic director until 2016.

With the group, she helmed shows because “we only had one person who was a trained director and we didn’t trust anyone else to have the vision for the work we were trying to do, so I stepped up.”

“I was pursuing acting throughout this period with a curiosity about directing and then the work was getting noticed and directing took on a life of its own.”

Nevertheless, her acting background proves useful. “I love acting and actors. I geek out over the process. Directing lets me explore all the roles in collaboration with the actors and how they all fit together in the visual container of all the design elements.”

“I tell people that this is the reason why representation is so important. If it had ever been modeled to me that someone who looked like me was directing, it might have occurred to me sooner that this career could be for me.”

She gives one additional reason on how she got into directing. “I also have to credit my children. My husband and I got pregnant only four months after we got married and I thought my artistic life was over. I found myself to be still voraciously wanting to create and so while I couldn’t act, I kept saying yes to directing, and now here we are!”

Chang believes that it’s a director’s job is to advocate for the audience. “And to attempt to understand what the audience’s experience of the play would be.”

“While I think an audience should be challenged, they shouldn’t be confused. Confusion can lead to rejection and disengagement. I don’t need an audience to agree but I need them to stay on the ride.”

Her process involves establishing clarity in storytelling. “Basically, what does an audience need to understand the story?”

“I read the play over and over again, taking notes especially when I ‘see’ a possibility or discover what I intuit to be the playwrights’ intentions are for their play, what they want to say to the audience.”

She then collaborates with designers, choreographers, music directors, production managers and such.

“Ultimately I think of a play as being a complex puzzle with lots of things to solve and go through the solving step by step.”