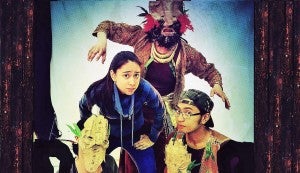 TORONTO, Ontario —”Kaldero,” a unique children’s play produced here will go on tour starting April 26 and throughout May to celebrate Asian Heritage Month.

This play was specifically developed for young audiences “to celebrate culture and family, to encourage youth to honor their roots and to find their inner strength.”

In the play, Caleb refuses to eat Filipino food because he’s afraid the kids at school will make fun of him.

His hunger triggers a magic kaldero (cooking pot) to pull him into the mysterious land of Mahiwaga, home of fantastic creatures like the trickster tree ogre Kapre and its band of duwende (elf goblins).

Caleb’s sister Cassandra and their grandmother search for him, facing the flying sea serpent Bakunawa and other hurdles.

Isabel Kanaan and Richard Mojica play Cassandra and Caleb, respectively. Belinda Rona Corpuz and Alia Rasul round out the cast.

“All foods that were iffy to me as a child but now are very much a part of my diet. The one that comes to mind the most would be dinuguan (pork blood stew), which is now my favorite to eat and cook.”

Having been born and raised in Toronto’s Thornhill suburb, Mojica didn’t have much access to Filipino mythology growing up. But working on this play has given him a newfound appreciation for it.

“I love it. For me, as a storyteller, there is universality to our myths. Creation stories, horrible monsters and the playful pranks of tricksters are motifs that repeat across cultures and centuries.”

Born and raised in Manila, Kanaan was scared of the Filipino monster tiyanak when she was a child. “The juxtaposition of having an innocent baby and it being an evil demon terrifies me,” she says.

Now, Kanaan loves how Filipino supernatural characters are being introduced to Canadian audiences by the play.

“I think the supernatural is trending nowadays, so it’s good to show people that it’s not all just vampires and werewolves, but also creatures from different cultures.

“I think this allows the characters to be more three dimensional and even relatable at times,” she says.

The play runs approximately 45 minutes and usually includes a talk-back session after the show. CBT can also provide a study guide to support further learning.

The play premiered last year to appreciative audiences. Mojica notes that children “respond instantly because they understand the elements of the story on a subconscious level. It’s rewarding and fun.”

Kanaan adds, “It’s great hearing them laugh and relate to specifically Filipino references in the play like adobo.

“After the show, we’d hear children speak in Tagalog and they’d teach the words to their classmates. The play gives them a sense of Filipino pride and that’s one of CBT’s goals.

“No matter where we are in the world, we should be proud of who we are and where we came from. I’m glad this play inspires children to embrace who they are and show off their roots,” she says.

The production is available for touring and can be booked for schools and other special events.