Representative Maxine Waters, a California Democrat and chairwoman of the House Financial Services Committee, set the tone, hitting out at the industry’s “chronic lawbreaking” as evidenced by hundreds of billions of dollars in fines and settlements and also alluding to 2008 US bank bailouts.

But with the industry on firmer footing today, there was less focus on financial stability than on the industry’s social footprint, with the hearing coming as leading Democratic presidential candidates jostle for attention, making aggressive proposals on taxes and regulation.

Several Democrats ripped into the 2017 tax cut signed by President Donald Trump as a boon to the rich that has done little to help families still struggling after the 2008 recession.

US bank CEOs respond to a question from the House Financial Services Committee:

Dimon and other CEOs emphasized the industry’s work to support low-income communities and minority-led businesses, as well as to push for greater gender parity in the workforce.

Patrick McHenry of North Carolina, the panel’s ranking Republican, criticized the session as a “hearing in search of a headline” and used his time to quiz CEOs on the financial system’s ability to withstand a no-deal Brexit.

Most of the executives said a “hard” Brexit would be a “challenge” but probably not a source of global systemic risk.

In one of the more probing exchanges, Nydia Velazquez, a Democrat of New York, pressed Citigroup Chief Executive Michael Corbat to justify his 2018 pay of $24.2 million, an estimated 486 times that of the average employee.

Corbat said his pay was set by the board of directors and that if he were an average employee who observed the yawning gap that “I would hopeful that there’s the opportunity to continue to advance.” 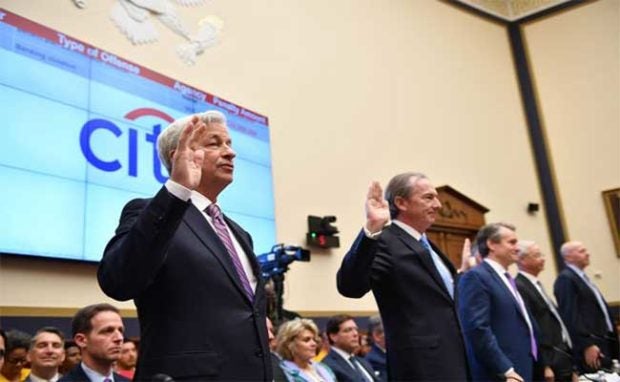 That response did not sit well with Velazquez, who said “this is why people who live in a bubble and in an ivory tower cannot understand the anger out there, especially among millennials,” she said.

Lawmakers also pressed the CEOs on policies on home foreclosure, lending to Russian figures and to gun makers.

Goldman Sachs and Bank of America were among the companies that said they had restricted funds to the makers of assault weapons, with Bank of America Chief Executive Brian Moynihan saying the shift was taken in response to employees who had been personally affected by mass shootings.

Goldman Sachs and the 1MDB Scandal

Dimon described the bank’s gun-lending as “very small” and said the same companies also made guns for the military and police.  But Dimon told Maloney he was open to rethinking the policy.