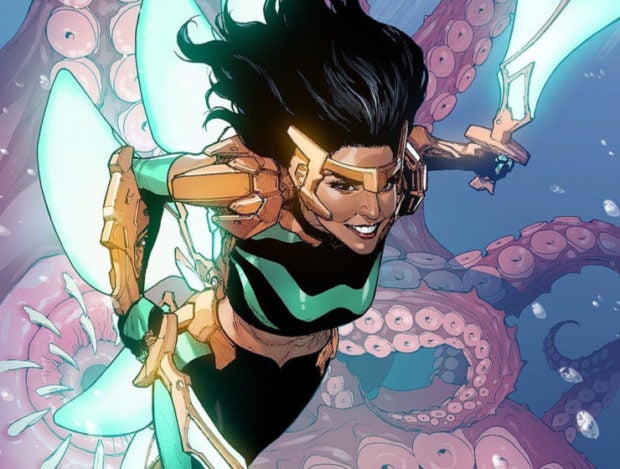 LOS ANGELES — A Filipina superhero will be gracing the pages of the Marvel Comics soon.

After the release of “Captain Marvel,” the first woman superhero to have its own major film, comic book writer and filmmaker Greg Pak on March 9 unveiled “Wave” on Twitter, designed and co-created by Filipino comic book artist Leinil Francis Yu.

Wave has been described by Marvel as “a mysterious new Filipino heroine.” She has identifiable Filipino “morena” skin, a green and gold costume, weapons, and she will be teaming up with heroes from China named Aero and Sword Master.

“Thank you so much for the huge response to Wave, Marvel’s new Filipina superhero, who’ll debut in War of the Realms: New Agents of Atlas #1! Huge thanks to [Leinil Yu], who co-created and designed her,” Pak posted on Twitter.

Marvel’s website, editor Will Moss said that “War of the Realms” will involve all the heroes from the “Avengers,” “Fantastic Four,” “Wolverine” — pretty much the whole line.

All these superheroes are out to fight Malekith, the king of the dark elves, who is conquering all realms including Midgard or Earth.