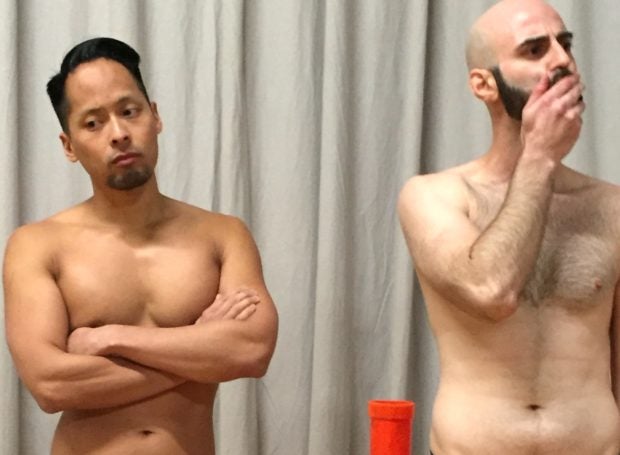 Theatre Rhinoceros describes itself as the longest-running queer theater in the world.

The series will be held at Spark Arts Gallery, kicking off with Duncan Pflaster’s “Underpants Godot” from March 16 to 23

to be directed by Quismorio.

Orquiza will then direct the U.S. premiere of Mark O’Halloran’s “Trade,” which will run April 5 to 14.

Theater Rhino’s literary manager and development director Joe Tally reached out to both directors to join the Pop-Up series. “Joe asked me to direct and I accepted. There’s a chance we’ll both regret it. Hashtag kidding!” he says, laughing.

If the title of the play he’s directing and his quips have not provided enough clues already, “Underpants Godot” is not a serious play.

“It’s a satire on both ‘Waiting for Godot’ and well-intentioned high-concept interpretations of classic theater works. Also, it is a classy reason to see men in their tighty-whities,” he says. “And much less!” The play presents a final dress rehearsal of a bold, postmodern, stripped down interpretation of the Samuel Beckett classic, when a representative of the Beckett estate shows up with serious questions about the production: Is it true to the author’s intent? Is it a fresh look at difficult play? Or, are those just men in their underwear?

The Pop-Up series offers a variety of subject matter. To contrast with the first offering, “Trade” is described as a piece about “duty, morality and desire.”

Set in a Dublin guesthouse, the play opens with a vulnerable and confused young rent boy who is with a middle-aged client who has blood on his shirt.

“The script is so simple yet profound,” says Ely Sonny Orquiza. “It explores intersectional layers and dynamics of financial, romantic, sexual and psychological relationship between the two characters.”

While in college, Orquiza had a chance to study in Ireland, where he began to appreciate its theater heritage.

“I studied modern and contemporary Irish Drama from the 1900s to present. The ethos of Irish Theater is rich and profound: it is full of drama, history, culture and tradition. Their dramatic literature is provocative and unapologetic.”

Born in Metro Manila, Orquiza moved to San Francisco with his family when he was 12 years old. A passion for acting led him to study Theater and Performance Studies at University of California-Berkeley. While there, he founded experimental theater group Projector Room Ensemble. He is a faculty member at American Conservatory Theater’s Young Conservatory and a teaching artist at Magic Theater and StageBridge.

As an actor, he has worked with groups such as Bindlestiff Studio, Cal Performances, Inferno Theatre, Exit Theatre, among others. Directing credits include “Bound 4 Heaven” for National Queer Arts Festival and “Predator Block Tango.”

He adds, “I am very drawn to sociopolitical theater and performing arts used as an agent of social change.”