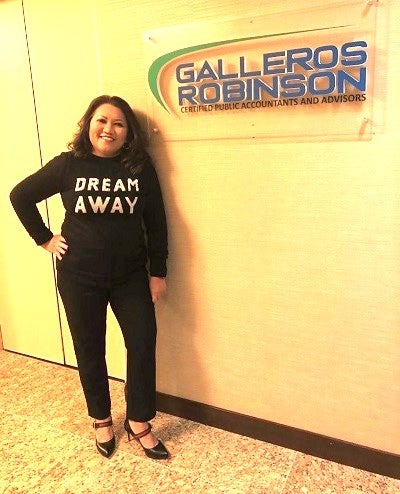 Galleros Robinson on the 23rd floor. The firm has about 300 non-profit and corporate clients. THE FILAM

NEW YORK — She was just days into her Madison Avenue office where we agreed to meet. I was greeted by piles of boxes, a courteous staff, and a romantic view of the St. Patrick’s Cathedral from her 23rd floor curtainless window.

“See? See? Hah?” CPA Leonora Galleros excitedly pointed to St. Pat’s gothic-style tower visible from a corner of her room. Then she got all school-girl giddy.

488 Madison Avenue is just one of four offices of Galleros Robinson audit and accountancy firm. There are three more locations across the country — in Penn Station; in Cream Ridge, New Jersey; and in Boca Raton, Florida, providing services to about 300 non-profit and corporate clients and about 700 individuals seeking tax returns. Certain government entities – including the City of New York and the Metropolitan Transportation Authority — count among the 300. She has sub-contract agreements through leading accounting firms, including Deloitte and Grant Thornton.

Diligence and grit appeared to have prepared Nora for her American Dream. Actually, there was no American Dream until she came to the U.S. in 1990. She was already a manager in Gingoog City’s water district when she won a Rotary scholarship for a one-year graduate studies at Fairleigh-Dickinson University in New Jersey, with a subsequent one-year fellowship in the same university, allowing her to complete her MBA in Accounting in February 1993. A view of St. Patrick’s Cathedral from her office. THE FILAM

Growing up in an impoverished family in Gingoog City, Misamis Oriental, she remembered selling hardboiled eggs on a moving bus and running after the bus. Her mother struggled to find jobs, sold street food, and washed clothes. Her father, like some Filipino men, was steeped in “bisyo” such as drinking and gambling. She is the eldest of four siblings and the first in the Galleros clan to graduate from college. She was already a breadwinner as she was coming of age.

“My father, I love him very much. He is the most hardworking person I’ve known. He taught me work ethic,” she said in an interview with The FilAm. “My mother worked very hard taking all odd jobs.”

A conscientious student who was always at the top of her class, she got her education through scholarships from high school to college at Christ the King in Gingoog City, Misamis Oriental, where she majored in Accounting, all the way through her MBA degree in New Jersey.

“All my friends were going to universities outside of the city. I was realistic, I know my parents wouldn’t be able to send me an allowance so I stayed in Gingoog City.” She passed the CPA exams and became the first CPA graduate of Christ the King. A historic feat which saved the then start-up course from being eliminated. “They had to produce a CPA in five years or else they would close the program” she said.

As a student in Fairleigh Dickinson, she worked a succession of odd jobs – tutoring, waiting tables, caregiving, etc. to support herself and her siblings through graduate school. She dreaded letters from home reminding her of tuitions; money was always never enough.

A scholarship may have got her started, but it was Faith that gave her the strength and tenacity to persevere. She took the CPA tests, all four parts, in one sitting and passed. It opened many doors. Nora and family on a recent visit to Gingoog City in Northern Mindanao. She is shown here with husband Jonel Tinio and son Brian Alberto Tinio at the city’s popular Rizal Park. Jonel works at Rutgers University as an accounting manager. CONTRIBUTED

She joined Watson Rice LLP as a staff auditor in 1993 and became partner after eight and a half years. “I got one of the fastest promotions ever. Typically, it would take 12 years to become a partner.” At the time of her promotion, she was the youngest and the first woman partner at Watson Rice.

In late 2007, she was recruited by O’Connor Davies LLP, a much larger firm with 64 partners at that time, and joined the firm’s Government Services Division in January 2008. The commute became a drag as she would often meet clients in Westchester and go home to Cream Ridge in New Jersey.

“I was leaving very early in the morning and going home very late, and my son was very young.” After three years, she decided to form her own company. Nora became Managing Partner of Galleros Koh LLP, a full-service CPA and consulting firm.

“When you’re a partner in a firm you’re paid very well and it comes every 15th and 30th. You don’t have to worry about it. When you’re on your own you don’t know what’s out there,” she described the dread of opening her own firm.

Eight years later, Galleros Koh evolved into Galleros Robinson, a result of strategic mergers. Her company currently has seven partners and about 40 employees and consultants.

Nora is now the Board Chair of the National Council of Philippine American Canadian Accountants (NCPACA), an umbrella organization of accountants across the U.S. and Toronto, Canada. She served as President in 2016-2017.

Nora was friends with fellow Gingoog City native Alice Manacay — wife of PIDCI Vice President Rely Manacay — who invited her to join the Philippine Independence Day Council, Inc. As president of a community organization, Gingoognons in the USA (GIUSA), she qualified for membership. Once in, her reputation as a topnotch CPA became known. She was asked to serve as assistant treasurer, and within a month named treasurer, taking over from Violeta McGough — who allegedly misused PIDCI funds – and resigned “for health reasons.”

“I had no idea about these things, I wasn’t paying too much attention,” she shared. All she knew about PIDCI was the annual parade which she always joined. What she found out as a member of the board is how the officers are “hardworking individuals eager to get things done.” Members of GIUSA (Gingoognons in the United States of America) celebrate their participation in the 2018 Independence Day Parade. Nora (center) came to know PIDCI through the parade. Today, she is a member of the board. FACEBOOK

The case against McGough is something Nora would rather not discuss because of the ongoing investigation by the U.S. Attorney General. She said PIDCI continues to cooperate with the Attorney General.

“We’re cleaning past issues,” she asserted. She was tightlipped on whether there would be charges filed, but stressed “there is an effort to get things resolved.” She sounded optimistic its tax-exempt status would be restored any time soon.

The family makes it a point go on ski trips to Shawnee, Pennsylvania once or twice a year for relaxation. When she wants to give her brain a rest, she watches Filipino films in theaters or reads romance or thriller books by Tom Clancy and John Grisham. When she wants to keep herself current professionally, she turns to books by Darren Hardy, John Maxwell, and Grant Cordone, among others who write about success, entrepreneurship, real estate and leadership.

Now on her own, Nora is done being scared.