Warriors run over Bucks on night dedicated to Filipinos

Warriors run over Bucks on night dedicated to Filipinos 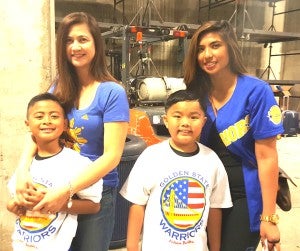 Joyce Peña (right with son Ethan) and Lorraine Bustos (left with son Jordan), both from Macabebe, Pampanga, proudly cheered their sons who were paired with Warriors players in the opening ceremony. INQUIRER/Jun Nucum

OAKLAND, California — Oracle Arena here was again filled to the rafters, this time mostly by Filipino fans on the second Filipino Heritage Night of the Golden State Warriors for the season on March 18.

After the Bucks took the first quarter with a two-point lead, the Warriors surged with its much-vaunted shooting artillery, despite the absence of ace player Kevin Durant, and improved on its 54-14 win-loss tally.

But Filipinos had more to celebrate in the jam-packed Oracle Arena as they also honored Filipino Americans who have contributed much to the community particularly Raymond Townsend, the first Filipino American to play in the NBA. Filipino fans gave Townsend the accolade he so richly deserves as he was introduced on the court. 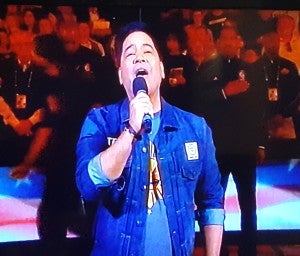 A 1978 22nd overall NBA draft pick, Townsend played two years for the Warriors before ending his NBA career with the Indiana Pacers in 1982. Townsend is a son of Taal, Batangas native Virginia Marella and still has family residing on Banawe Street in Quezon City.

A veteran of past Filipino Heritage Nights in Atlanta, Brooklyn, Toronto and Los Angeles, Townsend was very grateful to be a part of the historic tradition.

“Knowing that in the Philippines basketball is the number one sport besides boxing, don’t ever let them tell you that Filipinos cannot be here in the NBA, because one has already been here and one more who is paving the way now in the person of Jordan Clarkson of the Los Angeles Lakers,” Townsend advised. “I would love to coach in the Philippines and train players guided by this mindset.”

Townsend recalled his initial recognition by Filipinos back in 1980, when then- President Ferdinand Marcos brought him, together with champion figure skater Tai Babilonia, to the Philippines for a three-week tour to meet people and be their role models.

“I met a lot of beautiful people, among them Philippine Basketball Association (PBA) legends Sonny Jaworski, Mon Fernandez and Atoy Co. I went back again in the ‘80s, ‘90s and early 2000. Right now we are planning a tour back there with NBA Asia for about three-four weeks to do some camps for kids. 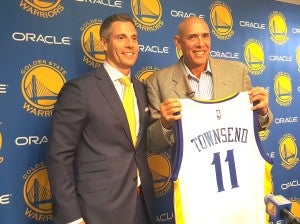 “I would go back on a low-key basis this time to meet with Filipinos who know me back there but have never met me,” Townsend announced. “The main reason that I am going back to the Philippines is to find out who can play in the NBA and see if we can get one from there soon. For almost 40 years, there has been no Fil-Am who succeeded me in playing for the NBA except Clarkson.”

Townsend also said that while he was playing in the NBA no one believed that he was a Filipino even as he always claimed to be one through his mom.

“Of course, it did not help that I had that big black Afro then and the whole league was composed mostly of black players. Now it is easier because you have around a hundred international players in the game so it is a little bit better. It is more open and inclusive now,” Townsend explained.

According to Townsend, the best way that a Filipino-born player could make it to the NBA is to go the route that somebody like Kobe Paras (son of PBA legend Benjie Paras) took.

“Get into a major US university as a Filipino, play three or four years, pay your dues then get drafted. That is the way to do it. It is very hard for a Filipino PBA superstar to come over here because they have a lot to lose as they have a reputation to protect. You don’t want to be one of the best ever in Philippine basketball history then get cut by the team that drafted you,” Townsend explained. He added that he was in touch with (Ateneo de Manila’s) Kiefer Ravena and Bobby Ray Parks (son of perennial PBA import Bobby Parks who married a Filipina). 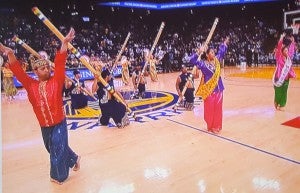 In a press conference, Warriors Chief Marketing Officer Chip Bowers gave Townsend his own Number 11 jersey and remarked that Klay Thompson is in good company in currently donning the same numbered jersey. Bowers also thanked the Filipino fans “for making the Oracle the toughest place to play (against the Warriors) in the NBA.”

Another Filipino who felt honored that night was world-class singer Martin Nievera who belted out the American National Anthem in the opening ceremony.

“It feels great to be here on a Filipino Heritage Night. It is my way of thanking the Warriors, the Bay Area, the Oracle Arena and everybody here for honoring the Filipino every so often. It is only fitting to say thank you by singing their anthem,” declared Nievera.

In the opening ceremony Fil-Am kids were paired with the Warriors players while Nievera sang the anthem.

“It was quite an amazing experience for my son Ethan and I to be a part of the Filipino Heritage night especially for my son who was chosen to represent the Filipino kids that would be with the players in the hard court for the opening ceremonies,” beamed Joyce Peña, whose family hails from Macabebe, Pampanga.

“The kids were star-struck and happy to see all the Warrior players. They were all looking forward to this and were practically dreaming about this for some two months now,” she added.

Lorraine Bustos, who came with son Jordan, said that all the boys were amazed about this lifetime opportunity to see the Warriors.

“They were not expecting to be down there to sing the National Anthem. They were prepared to play the game, but they had no clue that they were going to go down to the playing court. When they were down there, the looks on their faces and the smile they had when they came back were priceless,” Bustos said. 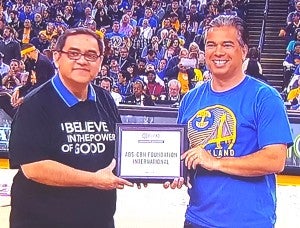 During a break, lone Fil-Am California State Assemblymember Rob Bonta presented an award to Jerry Bennett, the managing director of ABS-CBN Foundation International, for the foundation’s support to children and in addressing natural disasters like the super typhoon Haiyan.

Bonta represents the district that includes the cities of Alameda, San Leandro and Oakland, home city of the Warriors. “I am optimistic that we are going to be the champions again. I am confident because we have a great team especially since we have Kevin Durant this year aside from four All Star players.”

During the halftime break, folk dancers from Likha Pilipino Folk Ensemble performed “Vinta Voyage” from the South Philippines at midcourt.

“What a night to see the Golden State Warriors wearing those jerseys with Filipino emblem,” said Consul-General Henry Bensurto of the Philippine Consulate in San Francisco.

“Whenever a Filipino American like Raymond Townsend takes center stage, what a sight, what an emotion, what pride! I am very glad that he always acknowledges his roots through his mother who was in Taal, Batangas. Whenever he does that, he is elevating the whole Filipino community.“