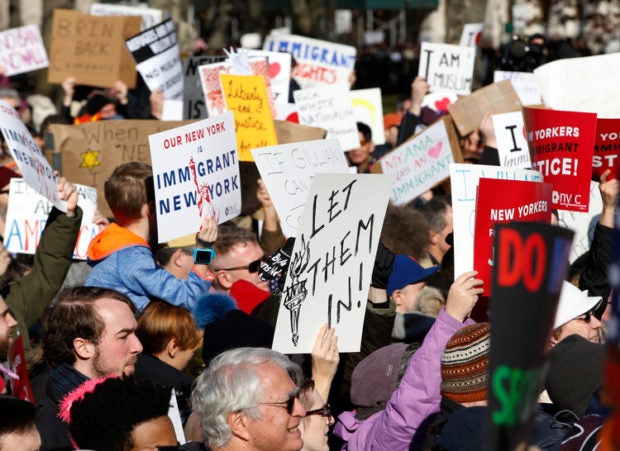 Thousands of immigrants who are asylum seekers, users of certain government assistance programs, on temporary protective status (TPS) or Deferred Action for Childhood Arrivals (DACA) recipients find no significant change in long-term legislative action to protect their rights to live and work in the United States.

Between the Muslim ban, the separation of families, terminating DACA, public charge and ending temporary protections for many, immigrants have had to face serious challenges since President Trump assumed office.

Nearly 800,000 have registered for the DACA program in the almost seven years since its inception in 2012. Allison Davenport, an attorney at Immigration Legal Resource Center, said at a national telebriefing on the status of key immigrant rights issues, organized by Immigration Legal Resource Attorneys and Ethnic Media Services on February 28, that “it’s been a bit of a roller coaster ride for DACA recipients because the future of the program has been on the chopping block over the last year and a half.”

The Pew Research reported in July 2018 that 73% of Americans favor granting legal status to children brought to the U.S. illegally (DACA recipients). Despite this overwhelming support the federal administration has not moved to re-instate the DACA program after rescinding it in the fall of 2017.

It is due to three lawsuits filed in federal courts that nationwide injunctions were issued requiring the USCIS to continue processing DACA renewals. The injunction will be valid until the DACA situation is fully decided.

Whether the Supreme Court takes up the case or doesn’t, the injunctions will continue in place until fall 2019, which means that DACA renewals will continue to be processed until that time.

The big takeaway, according to Davenport, is that those who have DACA status or have had DACA status in the past are eligible to submit applications for renewal in order to get a new two-year period of DACA status as well as a work permit. Davenport advised DACA holders to pursue the renewal process six months in advance of the expiration date.

When it comes to new applications, “unfortunately, the orders from the federal court do not allow for new DACA applications,” Davenport said. In other words, those who’ve never had DACA status are not eligible to apply.

Urging immigrants to get legal help to figure out other options, with or without DACA, Davenport said that “there have been some studies of people who’ve applied for DACA and when they’ve gone for consultation, between 15% and 25% of them have been eligible for some other form of immigration status or protection and they just didn’t know it.”

About 300,000 TPS holders are in the same holding pattern as DACA holders. Temporary protected status is assigned to nationals from designated countries for humanitarian considerations. A majority of TPS holders have been living in the United States for close to two decades.

Julie Mitchell from CARECEN, the Central American resource center, explained that the Trump administration has taken steps to terminate TPS for all designated countries “except those with ongoing wars.”

Multiple lawsuits have been filed across the country to protect the rights and privileges of TPS holders affected by the termination. On October 2018, one of the lawsuits, Ramos v. Nielsen enjoined the Department of Homeland Security from enforcing the termination of TPS for Sudan, Nicaragua, Haiti and El Salvador. Mitchell said that another case filed this month is taking on the case of TPS holders from Nepal and Honduras.

“Parents once protected by TPS are wondering whether to leave their children behind or take them to countries reeling from disaster,” said Mayra Alvarez, president of the Children’s Partnership, a California advocacy organization.

In an effort to dissuade those from Central America to seek refuge in the United States, several steps have been taken by the administration to limit the numbers making their asylum case at the borders.

There was a major attack on private actor persecution policy, that is threats from private individuals, making asylum virtually impossible for those trying to evade domestic violence or gang violence situations. This, in effect, was “rewriting 38 years of asylum law,” remarked Mitchell.

Turning away asylum seekers, including minors, at border checkpoints has been common as is “metering of asylum applicants.” Metering is a policy designed to limit the number of asylum applicants entering the United States each day. The applicants are required to wait at makeshift migrant shelters, often bursting beyond capacity. Handwritten lists of people are alleged to be recording and preserving places of people waiting in line to be seen and heard by a US immigrations officer.

The Remain in Mexico rule, was put into place a few weeks ago, according to Mitchell. This policy requires that asylum seekers remain in Mexico while their cases are processed in US immigration courts. The Mexican government has agreed to go along with this policy and it is being implemented at the San Ysidro border with the expectation that it will be expanded to other border sites.

Furthermore, according to Mitchell, US attorneys and journalists are being denied admission to Mexico to cover or help the human rights cases of migrants in central America. In essence, the government is severely handicapping asylum seekers by forcing them to stay in Mexico and at the same time limiting access to attorneys while their cases are being adjudicated.

A public charge determination examines whether an immigrant is or is likely to be dependent on the government for support. On Oct. 10, 2018, there was a proposal to change the public charge rule. The changes would affect non-US citizens who apply for a visa to enter the country or lawful permanent status — a green card. At both these process junctures, a determination will be made as to the likelihood of whether the person is or is likely to be a “public charge,” based on the person’s age, health, family and financial status and educational skills.

The change in the public charge substantial broadens the definition of public charge to include previously excluded housing, health and nutrition programs, including California’s Medi-Cal and food stamps program (SNAP).

This is just a proposal to change the public charge policy, at the moment, “however the damage is already done,” warns Alvarez. “Too many families are living in fear and confused about what policies have or have not changed and they’re reacting in response,” she said.

If the proposed public charge policy moves forward, many immigrant parents “may dis-enroll their children from health insurance, food stamps and other federally subsidized programs.”

The public charge policy proposed is likely to affect far more than its intended recipients, and stoke widespread panic among immigrants.

In a gratifying move, thousands of people recognized the harmful effects of the proposed public charge change and came forward to make their voices heard. “Before the Trump administration can finalize the proposed rule, the government must review more than 266,000 comments submitted on the proposal. Thus far about 64,000 comments have been reviewed,” Alvarez summarized. So it will take a few months, at the very least, before anything on the proposed public charge is decided.

And as such, Alvarez urged immigrants to continue using health, housing and nutrition programs as they did before.

Even with the concerted efforts of the Trump administration to limit, prevent and pursue immigrant rights, experts at the telebriefing said that nothing has really changed. With the courts in play, many of the harmful policies are still to be implemented. Ultimately, it’s up to Congress to set the right tone and follow through on long-lasting policies that recognize the positive impact of immigrants in our communities.