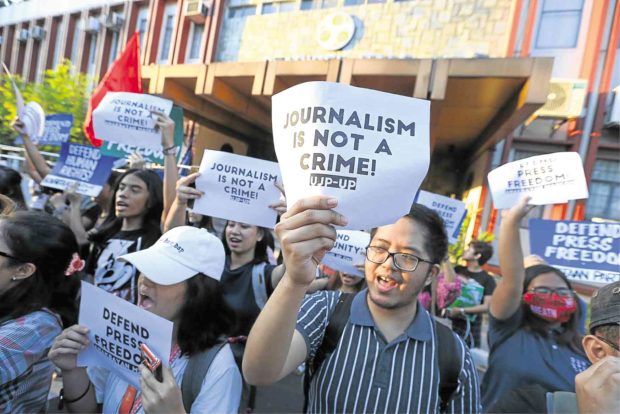 FOR PRESS FREEDOM Students hold a rally at the University of the Philippines Diliman on Thursday to condemn the arrest of Rappler CEO Maria Ressa. —RICHARD REYES

It’s an old, tired story that fascists, tyrants and bullies simply do not, or refuse, to understand. The harder you try to silence critics, the harsher and more brazen the tactics you employ, the stronger those critics become, the louder, more compelling their message comes across.

The backlash against Maria Ressa’s arrest proves this.

Whoever came up with the idea to harass Rappler and its CEO probably had a simple plan in mind: Swoop down on the Rappler office late in the day, haul Ressa to jail when it would be hard if not impossible for her to post bail, and let her spend time in prison to get a taste of what would happen if she and her team don’t back down.

We can just imagine the conversation during the planning of this scheme:

“We’ll make them see what happens when you dare defy Duterte.”

Within hours of the arrest, Duterte was again exposed worldwide as a typical fascist leader: ruthless; weak; desperate. This was underscored by atweet by internationally known journalist Christiane Amanpour: “You know a government is desperate when they arrest a journalist.”

That message echoed throughout the globe: Duterte, already notorious for inspiring a campaign of mass killings, for mean-spirited verbal attacks aimed at denigrating women and the poor, for the shameless embrace of a disgraced tyrant and his tactics, was clearly getting desperate.

Why else would he attack in such a brazen fashion an internationally known journalist and news organization that exposed the slaughter and the lies under his regime?

One point was immediately clear to observers around the world: this was not the first time the Duterte government has launched an attack on Rappler.

“Yet Another Absurd Legal Attack Against Rappler and Maria Ressa in the Philippines,” read the Amnesty International statement.  “Philippines Goes the Full Marcos on Press” was the headline of Forbes contributor William Pesek’s essayin which he said: What makes Duterte’s media putsch so disturbing … is the extent to which he appears to be working through the Ferdinand Marcos playbook.”

It was a playbook that failed repeatedly.

During the Marcos years, these ruthless tactics  worked for a while. But then they backfired. The backlash against the assault led to a more courageous, more determined journalists willing to risk everything to defy dictatorship.

In 1982, the Marcos regime raided the office of the WE Forum, a small, but feisty newspaper that became one of the most vocal critics of the dictatorship. The newspaper led by journalist Jose Burgos even dared to expose one of Marcos’ shameless lies: his fake World War II medals.

But instead of intimidating journalists, the crackdown emboldened Filipino reporters and editors in exposing the dictatorship’s abuses.

Marcos even went after smaller targets. In 1976, his security forces arrested Ditto Sarmiento and other editors of the Philippine Collegian, the student paper of the University of the Philippines, one the prominent critics of the dictatorship.

Again, the crackdown did not discourage dissent and opposition to the regime. In fact, it led to one of the most stunning acts of defiance that is still remembered to day.

One edition of the Collegian during Sarmiento’s term featured the image of the Oblation with the words emblazoned on top: “Kung hindi ngayon kailan pa?” (If not now, when?)

Sarmiento’s detention eventually led to his death in 1977. To honor him, the Collegian again published a special edition. “Para sa iyo, Ditto Sarmiento, sa iyong paglilingkod sa mag-aaral at sambayanan, (For you, Ditto Sarmiento, and your service to the studentry and the nation)” read the headline.

Again, the Oblation was the central image. But this time, it was a more defiant portrayal of the famous UP symbol. Instead of arms outstretched, the man in the image was shown with his his fist raised to the sky, having broken free from chains.