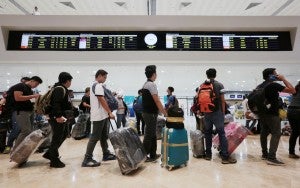 Critics of President Duterte’s unrelenting drug war are often dismissed with allegations that they are simply out of touch with reality. They’re accused of not having the foggiest idea what Duterte is trying to do in the Philippines. How can they possibly know the facts, when they reside 7,000 miles away in California?

Filipino expatriates in America are not even Filipinos, Duterte claims. They and other outsiders have no business interfering with national affairs. In other words, the international community should simply watch in silence as 8,000 and more Filipinos are slaughtered in a state-sponsored “drug war.”

Duterte and his loyalists have all the answers. Campaigning for the presidency, Duterte proclaimed he would rid the nation of drugs and criminality in six months. Sixteen million voters swallowed that promise hook, line and sinker. Now, since the death of thousands of poor Filipinos did not usher in the paradise Duterte promised, his minions in the legislature have reinstated the death penalty. Follow me to hell, Duterte told the nation. If nocturnal raids and extrajudicial killings did not do the job, let’s hang more drug addicts up like curtains.

People outside of the eye of the storm often see its devastating effects better. Nonetheless, l visited the Philippines to check things out from ground zero, so to speak. I spoke with ordinary folks. I sat down with the common tao, the regulars, not the movers and shakers. I did not interview citizens whose status in society might be compromised by their political views. Nor did I speak with outspoken Filipinos, whether in favor or against the government.

Instead, I spoke with simple, humble Filipinos — shopkeepers, drivers, baggage handlers, fishermen, household help, and many others. I spoke with residents in metropolitan Manila as well as folks in the remotest barrios of Palawan. How was the present state of affairs affecting them?

The more common reactions were: nakakatakot (it’s scary); sobra na (it’s too much); wala nang respeto sa buhay (there is no respect for life), etc.

I arrived at the Ninoy Aquino International airport in Manila very early in the morning. Awaiting a regional connecting flight, I strolled along the airport corridors until I passed by one of the shops that offered hot beverages and sandwiches. As the tindera (vendor) took my order, I asked her, “How is the peace and order situation now?”

“Since Duterte took over, are people satisfied with what the government is doing?”

“Umm…” She smiled faintly as she handed me a sandwich and poured my coffee.

“Why?” I feigned surprise.

“People are dying…for no good reason.”

Assured that I was not a government agent or a Duterte loyalist, the tindera opened up to me in Tagalog.

“Yes, they (the victims) might be selling drugs. They might be addicts,” she said. ” But, can they not be given a chance to change? Can they not be rehabilitated?”

“Maybe they can be put in a safe place and taught useful skills. That way, they can avoid drugs and find work. Besides, people are just being killed on the slightest suspicion. Just because the police think they are involved or they use drugs.”

“Sir, have you heard of Operation Tokhang ?”

“I’ve read about it in the papers.” She was referring to “Tok-tok-hangyo” (knock and plead), the systematic police raids others are calling tok-tok-bang-bang (knock and shoot).

“The police — they just come in and shoot! Nakakatakot (it’s scary). And it’s just the poor (who are targeted). The rich drug lords — they remain free.”

“But, I thought the government is going after all criminals, especially the drug lords.”

“No, not really,” the tindera shook her head. “Life has become cheap. And, have you heard they want to put the death penalty back? My friends say that if that happens, six people will be put to death every day. So many will die… nobody will be left!”

“Sir, it is also disgraceful how they treat the dead. Bound like poor animals. Binaboy! (handled like swine). Their mouths are shut with tape. The killers put cardboard signs on victims labeling them as druggies. The government, the police, do not even give the victims a decent burial.”

She paused to collect herself. I sat in silence, cradling my cup of coffee. None of her family or friends had been killed or injured in the drug war. But she clearly was affected by the ongoing extrajudicial killings.

“Near our town, “ she continued, “they just dump the bodies of victims in an open field. Corpses are rotting. People are afraid to claim the bodies, worried that the police might implicate them. Some people, family or friends or concerned folks, claim the bodies to give the dead a decent burial. So they can rest in peace. These are our fellow human beings. They deserve some respect. Even if they did some bad things, they still deserve some respect.”