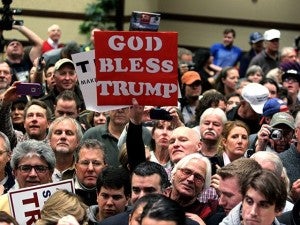 NEW YORK— My sincerest apologies to Trump voters. I believed I had sufficiently expressed my profound gratitude to all of you in previous columns. Alas, I was mistaken, having failed to grasp the enormity, the unbelievable scale, of the Donald’s role in the public arena that has become abundantly clear in the two months since his inauguration.

I shall now sing halleluiahs, for he is the gift that keeps on giving—and tweeting.

Thank you for that, Trump voters. You’ve had such foresight in elevating this diamond in the rough to unprecedented levels not just of national but also of planetary attention.

For which the world must thank you, as I do.

You have enabled the Donald to energize the ranks of American voters, not to mention the fact that he’s given a sizable segment of the electorate a huge kick to the butt, by which I mean those sectors of the public that have always been smug and condescending, secure in their comfort zones, not deigning to involve themselves in any political action. Now they are on fire, thanks to Mr. Trump. And to you.

Thank you, Trumpistas, for the emergence of a theater artist the likes of which we have never seen before, not at least in the White House. A theater artist who is at the same time an agent provocateur, a much-needed catalyst in the same way that a bacterium provokes the immunity system to spring into action, rendering it primed and ready to repulse and destroy any attack on the, in this case, body politic. If scientists had any sense they would name a bacillus after the Donald, or, failing that, an insect.

Thank you, Trumpoliners, for the circus that has rolled into town with ringmaster Donald, able to keep in line a pride of fat cats ravening for choice cuts that will make them even fatter, and a herd of albino pachyderms raring to trumple on anyone and anything standing in their way. The assemblage of wild animals in the Donald’s circus has been exemplary.

The same can be said of that delightful staple of circuses, the clown. What an eye the president has for outstanding comic talent! The surgeon Ben Carson, now head of Housing and Urban Development, is a sterling example. What sparks of amusement, what gales of laughter, he provoked when he made the unusual observation that African slaves were as much immigrants to this country who had to work even harder than other immigrants! Jonathan Swift would have been proud of Dr. Ben!

Not to be outdone, Secretary of Education Betsy DeVos’s rationale for allowing guns in schools was simply divine: the need to fend off grizzly bears! Such foresight! I don’t recall any sightings of these mammoth ursine beasts rampaging through school districts in Queens or any other borough of New York, but hey, you never know.

Thank you, Trumpovitches, for underscoring how vitally important the Donald is to national security. How diabolically clever, having him as the bait that will trap the Russian bear! (Perhaps Betsy DeVos can take care of this particular bear.) Of course he had to associate with Putin and his errand boys, even apparently enjoying a golden shower or two. How else would he have wormed his way into their confidence? That he needs deny any such association is obvious. Why would any double agent worth his salt blow his ultra-deep cover?

Thank you, Trumpons, for the Trumpian Touch. How exquisite a display of irony when the Donald mentions Watergate and Richard Nixon the paranoiac, in conjunction with his belief (tweeted, naturally) that President Obama had wiretapped his phones in the Trump Tower during last year’s election campaign. It was the Donald’s imaginative way of signaling that he was indeed worthy of being wiretapped.

Thank you above all, Trumperoons, for Trump L’oeil. You have made it possible for the nation to see up close and personal this dynamo of a character that always speaks his mind. And what’s on display is amazing. Why, ranting against immigrants, planning to build a wall—what is that but the Trickster Donald’s way of moving cities and towns to not only reaffirm their support of immigrants but to also help them? Nothing like threats to unify this nation of immigrants! Kudos to him and to you, Trumperoons: He is doing such an Oscar-worthy job in playing the absolute bad guy.