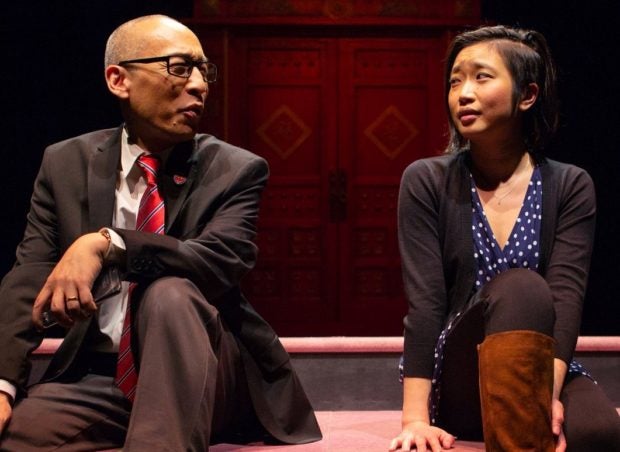 SAN FRANCISCO — Krystle Piamonte is the lead in Lauren Yee’s semi-autobiographical play, “King of the Yees,” which runs until March 2 at San Francisco Playhouse.

Piamonte plays a dramatized version of the playwright. Included in the cast are Filipino American actors Jomar Tagatac and Rinabeth Apostol, each of whom will play a variety of roles.

Lauren loves her father, a Chinese immigrant, deeply. However, she’s frustrated by his dedication to the patriarchal Yee Family Association, a male-only club—formed 150 years ago in the wake of the Gold Rush and the building of the transcontinental railroad—dedicated to preserving the Yee line and cultural history.

Cynical about his stories of their ancient ancestor Yee Fung Toy, Lauren instead wants to celebrate modern-day Chinese culture in America, recognizing its evolution and the contemporary face of Chinatown.

When her father goes missing, Lauren’s search for him takes her on a fantastical journey through modern-day Chinatown, and back into her historical ancestry.

This epic ride through space and time enables Lauren to finally understand and respect her father’s dedication to the family history and cultural bonds with the past.

Though the play is set in San Francisco and one of its plot points revolves around the city’s Chinatown, the play has never been staged in the city until now.

“It’s an honor to be part of this play’s homecoming and hearing audiences react with joy and pride at all the San Francisco references,” says Piamonte, who’s a native of the city herself as well.

She finds Yee’s script “hilarious and moving” and felt an instant connection to it. “It’s a beautiful love letter to her family and San Francisco’s Chinatown. I related a lot to the character of Lauren and her journey in the play.”

Aside from the hometown connection, as with the playwright, Piamonte’s parents are also immigrants. Her mother is Filipino and her father, as with Yee, is Chinese.

Piamonte’s recent credits include “Inside Out and Back Again” for Bay Area Children’s Theatre, “Two Mile Hollow” for Ferocious Lotus and “Welga” for Bindlestiff Studio.

Piamonte trained in the Theatre and Dance program at Sacramento State University, but prior to all of that, she nurtured her passion and honed her skills with Sinag-tala Filipino Theater and Performing Arts Association, a community group in Sacramento founded by Alcide “Sonny” Alforque in 1990 that provides free theater workshops.

“Joining the group was recommended to me when I was a recipient of Philippine National Day Association’s Outstanding Filipino Youth Awards. One of the board members recalled that I mentioned a love for singing on my application and suggested that I try out for Sinag-tala.

“I participated in their annual theatrical revue later that year and fell in love with theater.” 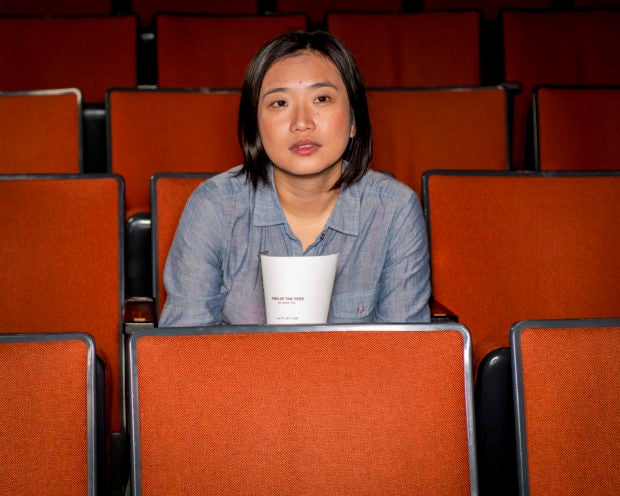 Krystle Piamonte plays the lead, Lauren in “King of the Yees.” KEN LEVIN,

Piamonte was involved with Sinag-tala for 12 seasons, from 2001 to 2012. “I started out as a principal soloist, but like most non-profits, I eventually took on more roles on the production side like Song Captain, Cultural Consultant, and Souvenir Program Editor and Designer,” she says.

“By the time I ended my journey with the company, my biggest responsibilities were being the Assistant Director and one of the Resident Choreographers.”

Piamonte shares that rehearsals for this production “have been some of the most fun I’ve had working on a script! Our amazing director Joshua Kahan Brody knows the play like the back of his hand and wonderfully navigated us whenever we were lost in the whirlwind.”

She considers the lead role “a definite highlight in my career as an actor, but it’s also a little bit intimidating since my character is based on a real person—the playwright herself.”

“Getting to play Lauren has been an artistically fulfilling experience, yet challenging in all the best ways. In a story filled with hammy, outlandish, larger-than-life characters, Lauren has to be the grounded one because she is the glue that holds the story together.

“It’s through Lauren’s eyes that we see what this play is about and who it’s for. We would lose the honesty and heart of the play if she was portrayed in a more performative way.”

Piamonte is also thankful for her colleagues. “I’m also working with a dream team of Asian American actors that I’ve looked up to for years, so getting to watch them create their characters and build relationships with scene partners has been helpful to my own craft.

“On top of that, we all get along so well both on and off the stage, so there’s nothing but love, respect, and trust between all of us.”

READ about the play “Welga,” staged at Bindlestiff Studio, here.