TLAHUELILPAN, Mexico — People in the town where a fuel pipeline fire and explosion killed at least 85 people say the section of pipeline that gushed fuel has been a habitual gathering site for thieves, repeatedly damaged and patched like a trusty pair of jeans. 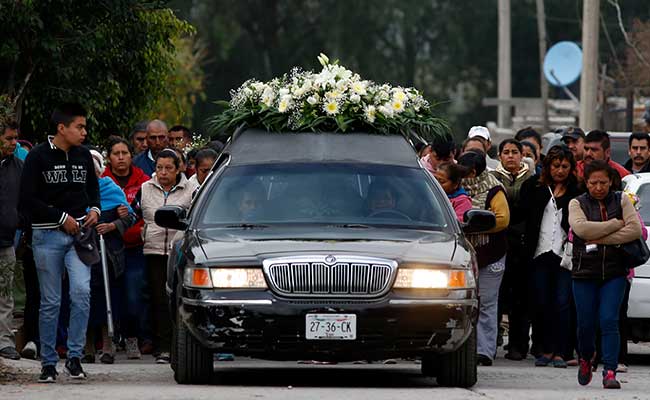 “It was the popular tap,” said Enrique Cerron, 22, who lives near the field. “You could pass by at 11 or 12 in the morning and see people filling up here.”

On Friday, amid countrywide fuel shortages at gas stations as the government attempts to stem widespread fuel theft, this particular section of pipeline had come back into service after being offline for nearly four weeks when somebody punctured the line again. Word quickly spread through the community of 20,000 people that gas was flowing. Come one, come all.

Hundreds showed up at the spigot, carrying plastic jugs and covering their faces with bandanas. A few threw rocks and swung sticks at soldiers who tried to shoo them away. Some fuel collectors brought their children along.

Tlahuelilpan is a largely agrarian community located 90 minutes by car from the capital and just 8 miles (13 kilometers) from the state-run Tula oil refinery. It’s surrounded by verdant alfalfa fields and power plant stacks, and is reasonably affluent by rural Mexican standards. Hidalgo state data shows about half the community lives in moderate poverty, in line with the national average.

At first the gasoline leak was manageable, locals say, emitting a tame fountain of fuel that allowed for filling small buckets at a time. But as the crowd swelled to more than 600, people became impatient.

That’s when a man rammed a piece of rebar into a patch, according to Irma Velasco, who lives near the alfalfa field where the explosion took place, and gasoline shot 20 feet (6 meters) into the air, like water from a geyser. 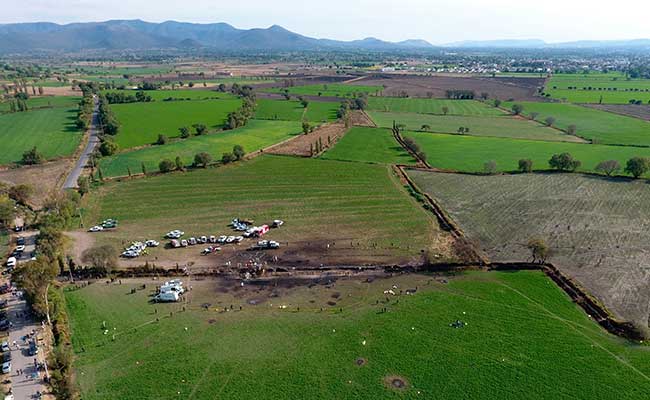 A carnival atmosphere took over. Giddy adults soaked in gasoline filled jugs and passed them to runners. Families and friends formed human chains and guard posts to stockpile containers with fuel.

For nearly two hours, more than a dozen soldiers stood guard on the outskirts of the field, warning civilians not to go near. Officials say the soldiers were outnumbered and their instructions were to not intervene. Only a week earlier, people in a different town had beaten some soldiers who tried to stop them from gorging on state-owned fuel.

The lure of free fuel was irresistible for many: They came like moths to a flame, parking vehicles on a nearby road.

The smell of gas grew stronger and stronger as thousands of barrels spewed. Those closest to the gusher apparently became delirious, intoxicated by fumes. Townspeople stumbled about. The night filled with an eerie mist, a mixture of cool mountain air and fine particles of gasoline.

Velasco said she rushed to aid a man she saw staggering along the road and away from the gusher. She removed his gas-drenched clothes to help alleviate the overwhelming stench of toxic fuel. Then she helped another young man, who described to her how the geyser had erupted.

Cerron was at the heart of the mayhem when he sensed mounting danger.

He pulled a 70-year-old man out of a ditch where gasoline was pooling; the man had passed out from the vapors. Then Cerron, a student, decided it was time to go home.

“They looked like zombies trying to get all that gasoline out,” says Cerron.

He passed soldiers warning would-be scavengers to stay away. It’s going to explode, they said. And it did. Once home, Cerron turned for one last glance at the gusher. Instead he saw flames.

The fireball that engulfed those scooping up gasoline underscores the dangers of the epidemic of fuel theft that Mexico’s new president has vowed to fight.

By Sunday evening, the death toll blaze had risen to 79, with 58 others hospitalized, federal Health Minister Jorge Alcocer said. Dozens more were listed as missing.

Soldiers formed a perimeter around an area the size of a soccer field where townspeople were incinerated by the fireball, reduced to clumps of ash and bones. Officials suggested Sunday that fields like this, where people were clearly complicit with the crime of fuel theft, could be seized by the government.

But Attorney General Alejandro Gertz ruled out bringing charges against townspeople who merely collected spilled fuel, and in particular those hospitalized for burns. “Look, we are not going to victimize the communities,” he said. “We are going to search for those responsible for the acts that have generated this tragedy.”

The disaster came just three weeks after President Andres Manuel Lopez Obrador launched an offensive against fuel theft gangs that had drilled dangerous, illegal taps into pipelines an astounding 12,581 times in the first 10 months of 2018, an average of about 42 per day. The crackdown has led to fuel scarcity at gas stations throughout the country due to shifts in distribution, both licit and illicit.

Officials say pipeline in and around Tlahuelilpan has been perforated 10 times over the past three months.

Lopez Obrador vowed on Sunday to continue the fight against a practice that results in about $3 billion per year in stolen fuel. Legally, that fuel belongs to the Mexican people, with state oil company Petroleos Mexicanos, or Pemex, acting as custodian.

But Pemex has long been plagued by corruption. Lopez Obrador described the company on Sunday as “at the service of people without scruples,” saying Pemex had been kidnapped by “a gang of ruffians,” referring to crooked government officials and executives within the company.

Lopez Obrador faces an uphill fight against a practice that has become an economic salve for poor rural areas where pipelines pass, covered by only a foot or two of dirt. Gangs recruit locals who then rally support from the community via gifts or threats of violence.

Storage sheds and warehouses dot the region, with landowners earning extra income from the rent or gifts of fuel.

The president plans a tour next week to several towns outside Mexico City where fuel theft has become entrenched in the local economy. He promises jobs and financial aid as an alternative for communities along pipelines that are somewhat dependent on income from fuel theft rings.

“Mexico needs to end corruption,” Lopez Obrador said Sunday. “This is not negotiable.”

Another pipeline burst into flames Friday in the neighboring state of Queretaro as a result of another illegal tap. But there were no reported casualties.

In December 2010, authorities blamed thieves for a pipeline explosion in the central Mexico state of Puebla, not far from the capital, that killed 28 people, including 13 children.