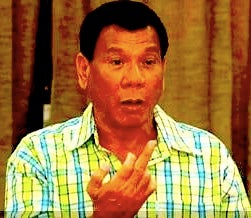 Like Rizal who questioned the Catholic practices of his day through the mind of Elias in Noli me tángere (unlikely comparison mine), the President offers food for thought, though it is hard to swallow, discomforting and worrisome. And his method is mean, disrespectful and bordering on violent rhetoric.

For three years now, Church leaders have been collectively forced into reticence or cowed into silence, some say. But I count the blessings.

Within the Catholic hierarchy, there is a material clutter, in addition to clericalism, where the urge to shed off is almost compelling.

If the unlikely retreat master forces the clergy to do just that and to put through the shredder, so to speak, all those which the public perceived as surplus and unessential to the requirements of salvation (such as position, authority, and money), then, indeed Father God can use a retreat master, even of the baddest type.

The retreat master also refers to commerce, selling inside and around the church, the price list (at times exorbitant) for church weddings or special baptisms, where an entourage of big shots stand as ninongs and ninangs? What a good reminder: Church fees that discriminate the poor are also surplus and unessential to the requirements of salvation.

If the President, like Marcelo H. Del Pilar–who printed the official church schedule of stolen fees to be offered for baptisms, weddings, funerals, et cetera, in order to incite the people against their parish priest (again, unlikely comparison mine)–forces our shepherds into one long uneasy contemplation, then Father God can indeed write straight with crooked lines.

Go back to basics: Sacraments are not for sale, says Pope Francis (Mass-casa-santa-marta/2018-11). Dagupan Archbishop Socrates Villegas pushed harder for an end to the system of charging fixed rates for the Sacraments, calling such a practice “a scourge on the people and a shame on priests.”

Archbishop Soc’s circular (dated January 11, 2016) means no more charging fixed fees for the issuance of baptismal, confirmation, and marriage certificates as well as wedding banns. “This is in consonance with our collective vision to cleanse the church of any semblance of commercialism in the rendering of church services,” Archbishop Soc said in the circular.

Within the Ecclesiastical Province of Manila (Dioceses of Antipolo, Cubao, Imus, Kalookan, Manila, Malolos, Novaliches, Parañaque, Pasig, and San Pablo), in lieu of the fixed fees of old, nothing but voluntary donations will be received. And other dioceses follow.

In 1206, Jesus of San Damiano, outside Assisi, spoke to the poverello: “Francis, Francis, go and repair My house which, as you can see, is falling into ruins.” Likewise, Christ is speaking to His Vicar on earth, the poverello’s namesake: Poverty. And simplicity.

By the same token, Filipino bishops and priests are called to repair, heal, revitalize, recharge, and renew the Catholic Church in the Philippines to become truly “a Church of the poor.”

“A Church that lives in evangelical poverty

which combines detachment from the material

possessions with a profound trust in the Lord

as the only source of salvation…

“A Church where no one is so poor as to have

nothing to give, and no one is so rich

as to have nothing to receive” (PCP II).

If the retreat master’s jokes and tirades, though obnoxious and detestable, help the Catholic hierarchy to go back to basics, to get purified like gold being tested by fire, then God can achieve His perfect plan through the imperfect people, even of the worst type.

The over-extended-three-year spiritual retreat is meant to change us, not the retreat master.