Dealing with sexual harassment and retaliation at work 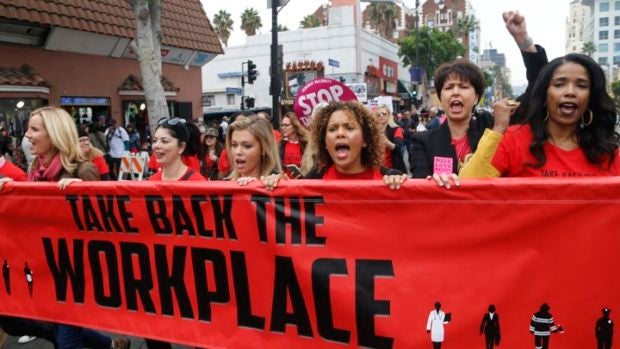 Participants march against sexual assault and harassment at the #MeToo March in the Hollywood section of Los Angeles. AP PHOTO

Amber Brown worked for Silverton and Essence at its vineyard and winery located in Temecula, California. After nine months of working there, Carlos Pineiro was hired as General Manager of the winery. Brown claimed that Pineiro made many sexually inappropriate comments to her while at work, flirted with her, attempted to block her path, and inappropriately touched her. He also became drunk at work, screamed at Brown, threatened to harm her if she complained, and grabbed her by the wrist causing her to fall down the stairs.

Megan Meadowcroft was hired by Pineiro after he started working at the winery. Pineiro also made many sexually explicit comments to her, made sexual gestures, took photos/videos of her rear while bending forward at work, touched her rear and genital from behind while she leaned forward to collect dishes, pushed her against a wall in a shed and told her that he would make her a manager if she had sex with him. Pineiro nearly hit her with a work vehicle after getting mad and throwing things inside the winery. Pineiro also called her numerous times that same night and she feared for her life and the safety of her children. When Meadowcroft complained to management about Pineiro, she was no longer added onto any new work schedules.

Both Meadowcroft and Brown complained about Pineiro’s conduct to different people in management. After receiving complaints about Pineiro’s sexual harassment and being drunk at work, he was fired. However, two months later, he was re-hired to the same position. Brown complained to the employer about this but was ignored. Because Pineiro’s conduct towards her was so bad, she was forced to obtain a restraining order against him. This resulted in Brown not being scheduled to work again.

Both women filed a sexual harassment and retaliation lawsuit against their former employers. During trial, various witnesses testified that Pineiro engaged in sexually inappropriate conduct toward Brown, Meadowcroft, and other customers and employees. Brown contended that she suffers from panic disorder, anxiety, panic and depression as a result of her post-traumatic stress disorder. Meadowcroft also argued she suffered from post-traumatic stress disorder.

If the employee’s efforts to curb sexual harassment by reporting the perpetrator to management resulted in suspension or termination, management’s conduct may be retaliation. This conduct amounts to retaliation if all of the following are present:

2) The employer knew that the employee engaged in such protected activity;

3) The employee was suspended, demoted or fired for engaging in the protected activity; and

4) The employee’s protected activity caused the employer to take adverse action, which can

be demonstrated by the employer’s negative reaction such as threats or warnings.

Sexual harassment and retaliation cases are taken seriously by the courts and the juries as shown by the verdicts. More importantly, it shows that when this unlawful conduct occurs, all hope is not lost. Legal remedies are available to protect the aggrieved employee.