They found love during Operation Brotherhood 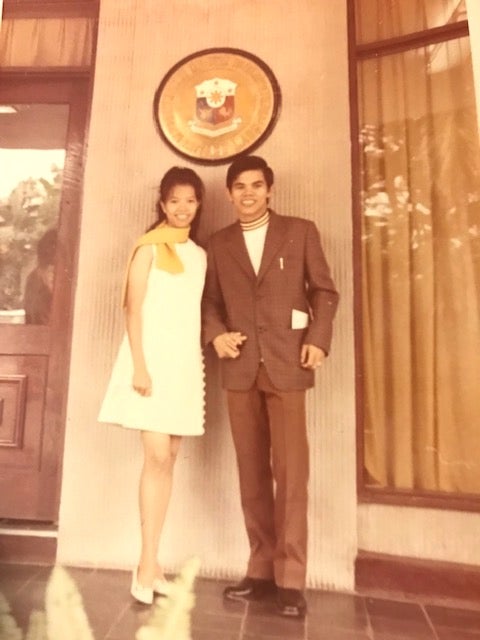 On the wedding day of Enrique Labao and Cely Isidro, which took place at the Philippine Embassy in Vientiane, Laos. CONTRIBUTED

Their faces were gaunt like old people. Their bellies protruded from their frail bodies. Food was scarce not only in this mountainous region. The kids were walking barefoot, in tattered clothes, while some were naked.  Seeing him, the kids gathered around him, begging for food, asking to be saved. His heart sank. He could not do anything but cry. It was Laos in 1968.

The scene has stayed in Enrique Labao’s mind, reminding him of the grim realities of war.

“I didn’t bring anything for the kids, this was a military support mission. Days after, I heard the tribe had been moved to another area. Their place had been overrun by the insurgents,” he recalls.

Enrique Labao, was among the 597 young Filipinos who volunteered for Operation Brotherhood. They were sent to Vietnam and Laos between 1954-1974.He joined OB in 1967.

Little did he know that the decision would lead him to his wife, Cely, nee Cely Isidro.They are now residents of Houston, Texas,

Labao was a senior from the University of Santo Tomas College of Nursing, when he met a volunteer group in Taal, Batangas during the Taal volcano eruption in 1965. He was doing an on-site survey and initial ground evaluation for a possible aid project.

“Their dedication under harsh conditions touched me and I felt the desire to do the same,” he says.

Prior to OB, Labao was a staff nurse at the UST Hospital Clinical Division and a clinic nurse at San Beda College.

“My parents already knew I didn’t like to go to the U.S. So, when I decided to join the OB, they were against it. Eventually, I was able to convince them,” Labao says.

The year 1967 was the time of reckoning for Laos. The feuding political factions, the rightists and neutralists, both members of the Royal family, and the Communist-led Pathet Lao made peace to play a role in running the government. American aid also poured in the education sector, which included the hill tribes. The medium of instruction was no longer French in Lao. In Vientiane, traffic lights were being installed and roads constructed.

“When we arrived in Vientiane our luggage was immediately whisked away by our crew. There was a dirt road on the way to OB House, huts and thatched roof houses gave me an ‘almost home feeling’. I grew up in the province,” Labao says.

Labao and some members of the team stayed in Vientiane OB Hospital (Setthathirath Hospital). It was supported by the USAID funds. He was assigned to all field operations in the provinces of Attapeu, Kengkok, Paksong, Vangvieng, Sayaboury, Ban houei sai and Lima Site 20 Sam Thong. 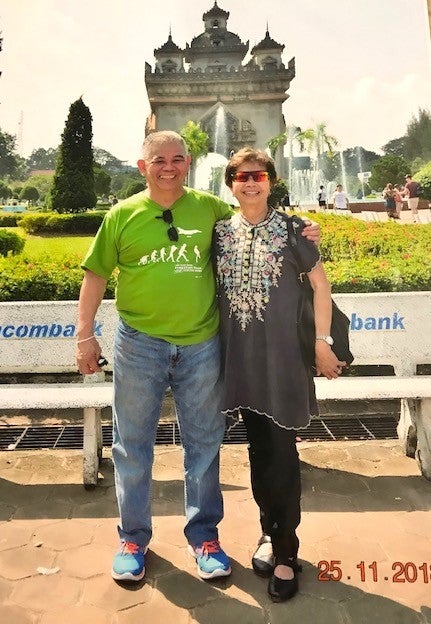 Enrique Labao and Cely today, at Patuxai in Vientiane on November 25, 2018. Patuxai is a war monument built between 1957 and 1968. Formerly known as Anosavary, it was dedicated to the memory of the Laotian soldiers who died in WWII as well as a memorial of independence from France in 1949. Pathet Lao changed it into Patuxai meaning Victory Gate in honor of their victory against the U.S.-backed Lao Royal Government. CONTRIBUTED

The Lao people were caring and accommodating, but Labao only knew basic Lao words and could not keep a conversation going. After some time, he became fluent in Lao.

His first taste of khao niao (sticky rice) with pin kai (chicken), lots of vegetables and pho were enough to make him enjoy the city. Phet lai (really hot and spicy) food were served to them in the outskirts of Laos.

Labao was among three nurses who received special assignments separate from normal OB Operations. He trained army medics in surgery and also participated in rescue and recovery operations.

“Nothing much happened in Vientiane.  It was your field assignment that carried a certain element of danger, travel was mostly by air on small planes or choppers or ‘milk run,’ a C47 airplane stopping at designated airstrips,” Labao explains.Milk run is slang for a routine trip; it originated in the Royal Air Force and US Army Air Force during World War II.

Labao was not spared from danger.

“I was asked to fly to an undisclosed fire base to vaccinate the artillery crew. When we were taking ground, our chopper was sighted and shot at. A couple of shots landed close to me. You wouldn’t believe how I said the Our Father that fast,” Labao narrates.

On April 10, 1966, three OB field personnel drowned in the Sekong River at Attepeu Province in Laos. These were the only recorded casualty among OB members.

Love in a time of war

Love blossoms even in the most perilous situation. Cely Isidro was a medical technologist already working in America. When she heard about OB, she flew home to the Philippines and joined the OB in 1969.

“She’s cute, has a smiling face intelligent and is really nice. Of course, the other guys took notice too! I had an advantage, she’s from UST and so was I. I had my pickup line all set,” Labao says.

Intimate relationships among volunteers were strictly forbidden. They could be terminated if discovered. But this did not deter the love birds.

Cely was transferred to the Sayaboury field team and Labao to Vang Vieng field operations. To keep in touch, Labao devised a code system where he can send messages to her via radio. Field Teams are required to contact Vientiane HQ twice a day where orders and official messages were relayed. They sent love letters via official pouch once a week.

“I tried to sneak into the radio room whenever it was contact time and slide my code in: sending 99 to my LO…KID,” Labao laughs.

The two were assigned together at the field operations in Ban Houei Sai, the port of entry from Chiang Rai, Thailand. Female personnel were evacuated across the Mekong River every night due to military operations.

Labao and Cely were married in August 1972 in Vientiane. Both were reassigned to Sayaboury Field Operations.

OB has complete records of Filipino volunteers marrying fellow volunteers, Laotians, and other volunteers or workers from different organizations during the war.

Dr.  Orlando Alagar was married to Lao princess Somprasong. They moved to the Philippines. Dr. Alex del Carmen married Nang Kiet, a Laotian. Although he immigrated to the U.S., he always visited Pakse. According to Asmad Hiya, a Filipino engineer who met him in 1993,  Dr. Alex is known for his generosity, and as a good doctor of the people.  He passed away on June 10, 2016 at the age of 93 in Tennessee.

Starting in 1971, the U.S.- backed Royal government began losing the war.  On February 21, 1973, the Vientiane Treaty was signed between the government and the Pathet Lao. But the ceasefire agreement was short-lived.

On September 16, 1974, around 300 Lao hospital workers went on strike demanding higher wages, dismissal of senior staff, and training of Lao to take over all of hospital functions among others. 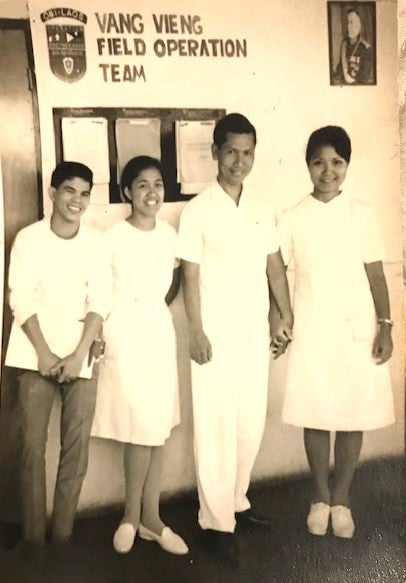 Labao was recalled to Vientiane to become the head of Nursing Service, replacing the senior administrators. There were no signs of hostility towards the Filipinos, and Labao took this as a good sign for their future activities.

“I think they knew I was being honest with them and I truly cared for them. I was so at peace around them,” Labao says.

Evacuation began in January 1975. OB female and non-essential personnel including Cely, who was already pregnant, had been evacuated early on. Labao was among the last to be evacuated. He left Laos in May 1975, a few days after the fall of Saigon.

The Pathet Lao seized power on August 15, 1975. King Savang Vatthana was arrested and died in captivity.

Labao started to work at the Philippine Heart Center for Asia. Although the couple wanted to stay in the Philippines, his mother-in-law became gravely ill and they needed funds for medication.

“There was no recourse but to move Stateside to earn. My wife went first since she was already licensed. I followed after getting my papers ready for the state board,” Labao explains.

The family settled in Houston, Texas in the late ‘70s.

After 50 years, Enrique Labao, now 73, revisited Vientiane on November 25, 2018. He joined the surviving members of Operation Brotherhood (OB) in celebrating the spirit of volunteerism, to remember the fallen, the survivors, and the love that kept them going through the adversities.

Vientiane had changed. The dirt roads were now concrete highways, high-rise buildings overshadowed the old dilapidated ones. Vientiane was now a bustling city. The only old edifice that still stood was the original OB House at That Luang.

Labao looked up at the bright Vientiane sky and whispered: “May the Great One bless your Nation.”