WASHINGTON, DC. – A country struggling with chaos and uncertainty. A nation reeling from a deadly pandemic. A damaged economy, which has sent millions of people into extreme poverty. A city ringed with a maze of barricades and tall fencing, occupied by armored vehicles and soldiers in combat gear.  Grim images of a war zone, reminiscent of Martial Law days in the Philippines.

That’s what Washington, D.C. looked like days before the historic Inauguration of Joe Biden, the 46th President of the United States of America.

Two weeks earlier, domestic terrorists stormed the U.S. Capitol trying to stop the official certification of the 2020 election results. Threats of further violence prompted deployment of more than 25,000 National Guard Troops to the nation’s capital, turning the city into a war zone. 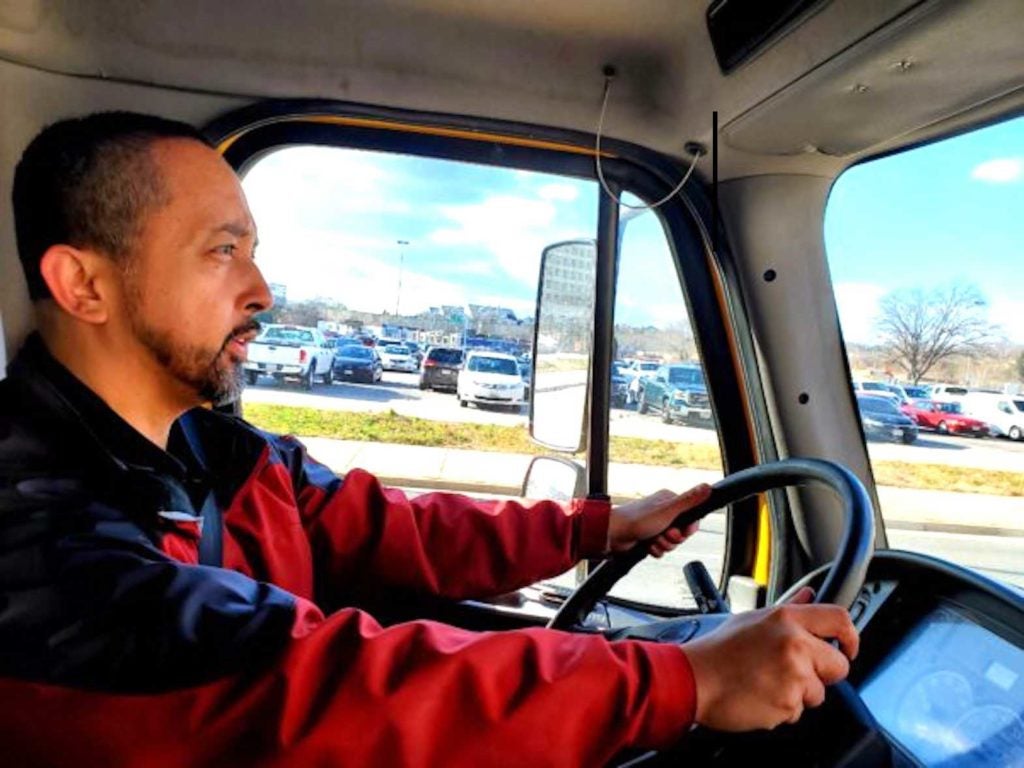 HUNGRY’S Rodney Salinas delivers food to the National Armory, where the troops were served meals. FACEBOOK

They came from across the country to help law enforcement with enhanced security for Inauguration Day. Thousands were stationed for round-the-clock duty in the Capitol, some sleeping in congressional buildings and on the ground in garages.

They also had to be fed. For this formidable task, more than 30 local restaurants and food services came together to prepare their meals during inauguration week.

Among them was HUNGRY catering, an on-site pop-up restaurant in Arlington, Virginia. Two nights before Inauguration Day, Rodney Salinas, a Fil-Am community leader and HUNGRY’s National Director for Food Solutions, put out a call for volunteers to help prepare 87,000 meals for three days. After packing them in cardboard boxes, the meals were to be delivered to the National Armory, the Operations Center for all National Guard logistics. 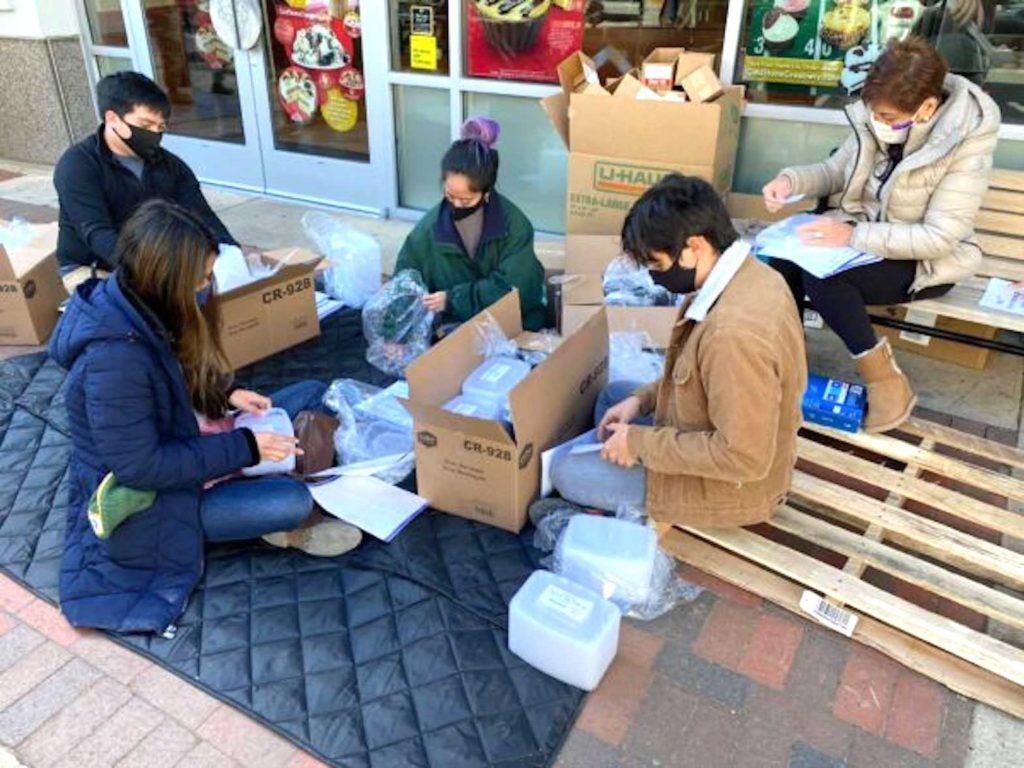 A diverse crew of volunteers showed up to help prepare food for National Guard troops. FACEBOOK

So, on the morning of January 18, Martin Luther King Day, dozens of volunteers gathered in a business location in Virginia. They included students, professionals, community members, friends and furloughed restaurant workers from HUNGRY’s partners — Delia’s and Heirloom DC restaurants.

Due to COVID and the enormity of the task, they set out long rows of tables on a sidewalk outside the building, forming an assembly line as they sorted trays of food that were brought in, sealing, labeling and packing them. The mood among the volunteers was cheered by music blasting from boom boxes. Some sang along. Others danced to the beat. The faces were white and brown and black. It’s what America looks like – far different from the other America of mostly white faces that engaged in vandalism and violence.

George Theodorou, owner of Delia’s, a restaurant chain known in the DMV area, immediately jumped into the feeding project when Salinas, a good friend, contacted him. Although they had closed some of their family owned restaurants due to COVID, Theodorou accepted the challenge with the understanding he was going to provide four thousand meals a day for three days. Within hours, that number went to fifteen thousand meals a day for three days.

“This week was impactful beyond measure. Not just for being chosen to do this work or to have successfully accomplished it, but for the people who came together to make it all happen” he said. 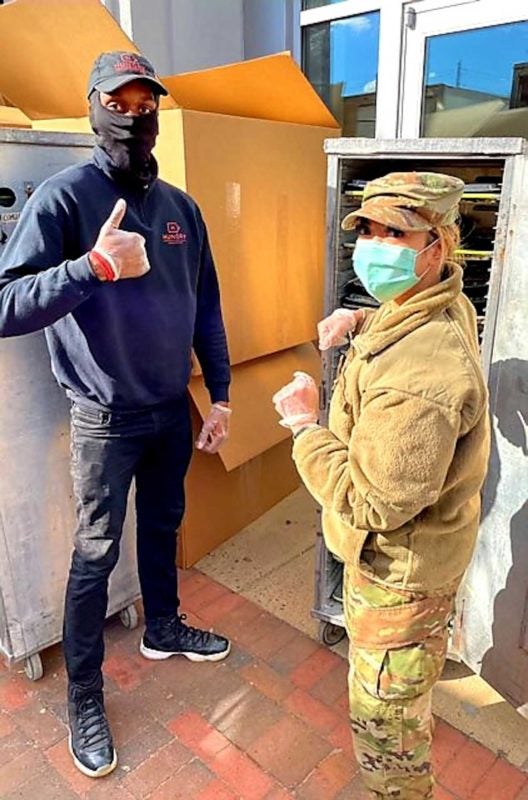 The family-owned chain had closed some of their restaurants, so they had to let go of some of their employees. But these furloughed workers came and helped out to make the mission happened.

”You all changed my life, and I’ll never forget our time together,” Theodorou told the National Guards assigned to assist him and his team prepare the food.

Among those responding to the call for volunteers, posted on Facebook, is Regine Victoria, a 24 year old Filipino American from Arlington. Her task was to label each food container with its contents. Her team completed 15,000 by the end of the day, with little break for lunch. “I didn’t mind that it was on short notice,” she said. “It’s my way of giving back to the community. I would be happy to do it again.”

Krishia Baltazar is a Filipino American with the Air National Guard from Minnesota. The 23-year-old pre-med student was among the volunteers assigned to Theodorou’s team.  “I had a very unforgettable week,” she said. “Although it was very fast paced and stressful pushing out  25,000 meals a day, it was very rewarding knowing the people I worked with in the national Guard are getting hot meals. I also met amazing people from Virginia and made life-long friendships.”

It was Baltazar’s first visit to the DMV area. She vowed to come back not only to visit the monuments and tour the city, but renew friendships with those she met during the 46th Presidential Inauguration.

Another volunteer is Jenny Nguyen, a 24-year-old Vietnamese American who just moved to the DMV area last June from Wichita. Because of COVID, Jenny has been working at home. She works with the United States Institute of Peace. Her brother serves with the National Guard in Wichita.

“When I learned of an opportunity to lend a helping hand, I felt good,” she said. “It’s a rare honor for me to serve those who are protecting not only the Capitol but our democracy.”

Ryan Namata, Capital Region Chair of the National Federation of Filipino American Associations (NaFFAA), also reported for volunteer duty. “This is the closest I could get to participating in the Presidential Inauguration,” he said. “I care for those who protect my city and our democracy. What happened on January 6 was alarming and should never have happened.”

The youngest volunteer is 19-year-old Filipino American Alex Johnson. “I volunteered because I had some free time and wanted to help out,” he explains. “It was a very interesting experience witnessing and participating in the massive logistical task of feeding a large group of people.” A freshman at the University of Virginia and the son of Brent and Karmela Lejarde of Fairfax, Virginia, the young Johnson said he is highly appreciative to learn of all the effort and planning involved.

Reflecting on a gargantuan task that turned out to be rewarding and satisfying, Salinas says he is proud to be the son of a veteran and is specially honored to serve the troops. And now that a rare mission has been accomplished, Salinas is hopeful things will get better under the new administration of Biden and Harris. He draws inspiration from the young poet Amanda Gorman, whose spoken poem at the Inauguration asserts this bold affirmation:

“We will rebuild, reconcile and recover.

And every known nook of our nation and

every corner called our country,

our people diverse and beautiful will emerge,

When day comes we step out of the shade,

the new dawn blooms as we free it.

For there is always light,

if only we’re brave enough to see it.

If only we’re brave enough to be it.”