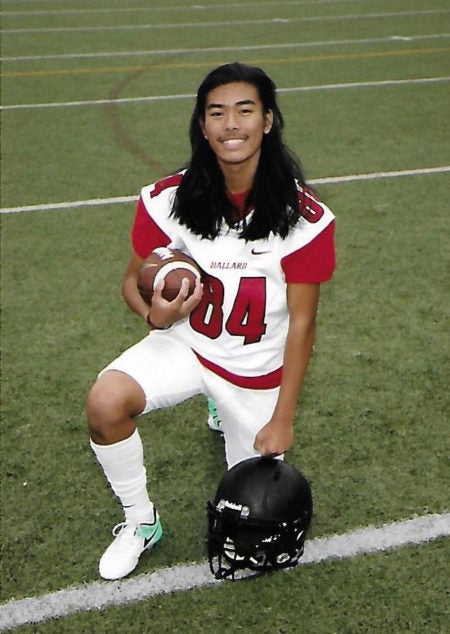 LOS ANGELES — A Fil-Am high school student in Seattle, Washington, has been named the final recipient of the 2018 Seahawks Athlete of the Week award, which is given to student-athletes who display leadership, passion and dedication both on and off the field or court.

Joshua Villarino, a junior football kicker at Ballard High School, was selected for the award based on his leadership through athletics, academics and community action, according to a Seahawks announcement.

On Sunday, December 2, Villarino was recognized at the Seattle Seahawks home game against the San Francisco 49ers on the CenturyLink Field. The football team presented an in-school presentation to Villarino a couple days before on Friday, November 30.

Part of the award is a $1,000 grant for the Ballard High School athletic department.

“It took me and my parents by surprise,” Villarino told the Asian Journal. His father said the family noticed their son’s talents from as early as when he was four years old and added that Villarino had been classified with a learning disability in 8th grade and was able to overcome the adversity through hard work.

On being recognized at the Seahawks vs. 49ers game, Villarino said it was the “most exciting experience to ever feel when you meet one of the most respected players in the NFL.”

“During the leadership summit meeting, it was a great learning experience to listen to the Seattle Seahawks and CenturyLink Executives about their role in sports and the leadership role they play in their jobs in the Seahawks,” he added.

Aside from being a kicker on his high school football team — a position he stuck to after trying out his freshman year — the young Villarino is also a dancer and has been dancing since he was five years old. Among his biggest inspirations is Michael Jackson.

After high school, Villarino said he hopes to receive an athletic or academic scholarship and plans on majoring in either Business, Marketing, Aviation, or Entrepreneurship. He said he’d like to own his own business as well.

On what he’s learned and on what he thinks other young Fil-Ams also looking to succeed in athletics and leadership could take away from his experiences so far, Villarino said time management and being well organized are top priorities.

“You should continue focusing your efforts on hard work, and work ethics to achieve anything you set your mind to. You should look for your passion and dedicate your time to give back to your community. You should have a fighting spirit by taking on challenges of succeeding in your academics and excelling in athletics and extracurricular activities,” said Villarino.

“My biggest challenge is that I was labeled with a learning disability in Math, English, and Reading during my 8th-grade year,” added Villarino. “I turned my obstacles into personal drive and passion and if you focus on those goals you will be recognized for your achievements.”