The Bells of Balangiga and a novel II

The Bells of Balangiga and a novel II

NEW YORK—The very word “history” itself is misleading. There is never one history, there are only histories and always with a lowercase “h.” And the term clearly privileges one gender over another. No question but that what the writer Gina Apostol does in Insurrectois to examine the female characters’ herstories, in a broad arc that swings from the 19thcentury—in Europe, North America, in the islands—to the present-day that includes Rodrigo Roa Duterte’s perverted fascistic vision of the Philippines. 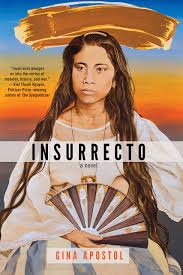 Women take center stage here, whether in 1901, in the midst of the Philippine-American War, or in the 21stcentury. In Balangiga, Casiana Nacionales is the belle behind the bells (and the balls), coming up with the brilliant stratagem that leads to the decimation of Company C, while Cassandra Chase, an American photographer, documents the war. In traffic-choked Manila, Magsalin, a Filipina expatriate writer based in Queens, is the American filmmaker Chiara Brasi’s guide and translator (in Tagalog Magsalin means “to translate”) for a trip to Balangiga.

Chiara, a fashionista of sorts, sees this road trip as some kind of “spiritual journey.” Each has a script, each has her own take on what (and who) went down, and what Balangiga—and by extension the ties that bind and wound the two countries—meant and continues to mean. Meanwhile, In the background, another kind of war rages, that on drugs, with corpses “piling up at the garbage dumps, in the slums, near schoolyards.”

All these women are insurrectos, or more precisely, insurrectas, an apt representation   of cherchez la femme. About that Spanish word, Apostol’s take on it is richly and doubly ironic, questioning at once its legitimacy in how it portrays the revolution against Spain (the first against a Western colonial power in Asia) and, later, the bitter, bloodier, longer war against the United States, a war that has itself been a casualty of selective memory—an extrajudicial killing, you might say.

“Insurrection” implies a morally suspect uprising against legitimate authority, its participants cast as outlaws, rather than revolutionaries. In Apostol’s novel, we have various Eves usurping not just their Adamses but the whole God-the-Father business. One exception may be Virginie, Chiara’s delicate and beautiful mother, though she does come into her own once Ludo Brasi, Chiara’s filmmaker father, dies.

The dominant roles the women have are a reminder that pre-colonial society in the archipelago for the most part was matriarchal. As for the men, they inhabit the periphery to which the women were once relegated. They provide comic relief, as is the case with Magsalin’s uncles, karaoke enthusiasts and Elvis lovers, or signify clumsy aggression. Edward and Gogoboy, the two bodyguards accompanying Magsalin and Chiara, are almost caricatures of masculinity. Apostol is having her laugh at all these macho qualities that obscure the many skirts behind the trousers.

And she is having a laugh as well at official narratives. These  have always flowed from the victor’s propaganda machinery. Such narratives have long created the illusion that the relationship between the Philippines and the United States is somehow “special,” that once upon a time, the former was ”America’s showcase of democracy”—albeit propped up and in exploitative fashion by the almighty U.S. dollar.

These are the very narratives that Apostol disrupts, for they methodically dismember that forever problematic if not enigmatic relationship between the colonizer and the colonized with, at the center of the poisonous orchid, the 1899 Philippine-American War, a brutal conflict that anticipates the bloody engagements of the Cold War in Korea and in Vietnam.  The wholesale revenge exacted by the U.S. troops under General Jake Smith against the whole island of Samar is at once a repetition of  acts of senseless retribution against Native Americans, and predictive of, for instance, the My Lai massacre in Vietnam.

What better way to view a past that is not really the past, an ever expanding labyrinth, than through the lens of not just one but many cameras? Restrict it to one lens, one script, one point of view, and you will always fail to gauge the depth and slipperiness of what is being witnessed. Hence, the two scripts penned by Magsalin and Chiara. Add the novel as the third one. And Casssandra Chase’s believable stereoscopic cards as a fourth.

Other scripts lie in wait within Insurrecto’s fertile pages. The jumbled-up chapter numbers are a clue. Apostol has constructed a novel that is an ambitious, cheeky, at times savagely brilliant, tour de force.