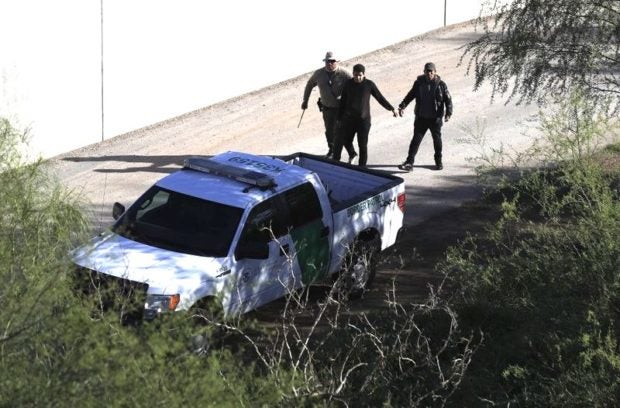 As he tries to pressure Democrats to fund his long-promised southern border wall, Trump is claiming the country loses $250 billion a year on illegal immigration. But it remained unclear Tuesday where Trump had found that number, which is dramatically higher than previous estimates.

A look at his claim:

TRUMP: “Could somebody please explain to the Democrats (we need their votes) that our Country losses (sic) 250 Billion Dollars a year on illegal immigration, not including the terrible drug flow. Top Border Security, including a Wall, is $25 Billion. Pays for itself in two months. Get it done!” — tweet Tuesday.

THE FACTS: Trump’s numbers left even those sympathetic to the president’s position scratching their heads.

“I’m not sure where the president got his numbers,” said Dave Ray, a spokesman for the nonprofit group FAIR, the Federation for American Immigration Reform, which advocates for lower immigration numbers.

Neither the White House nor the Department of Homeland Security responded to questions Tuesday about where the $250 billion estimate had come from.

The Heritage Foundation, for instance, estimated in 2013 that households headed by immigrants living in the U.S. illegally impose a net fiscal burden of around $54.5 billion per year.

And even Trump himself has contradicted the figure. During his 2016 campaign, Trump claimed that illegal immigration cost the country more than $113 billion a year — less than half the number he tweeted Tuesday.

That estimate appeared based on a paper by FAIR, which released an updated report in 2017 that claimed taxpayers “shell out approximately $134.9 billion to cover the costs incurred by the presence of more than 12.5 million illegal aliens, and about 4.2 million citizen children of illegal aliens” at the federal, state and local levels, with “a tax burden of approximately $8,075 per illegal alien family member and a total of $115,894,597,664.”

The $116 million figure included services like health care and education, as well as spending on agencies like U.S. Immigration and Customs Enforcement, minus the $19 billon the group concluded those who are living in the country illegally pay in taxes. But it also included costs associated with the children of those immigrants in its tally, even when they are U.S. citizens. The estimate was criticized for making broad generalizations and other major methodological flaws.