The smell in the air isn’t from the California fires, which is bad enough.

In the state with all the American Filipinos, the air is so unhealthy, people are walking around like they are in the most polluted parts of Asia.

It’s a sign of how much under the Trump administration America hasn’t exactly become “great again.” Instead, America is drawing closer and closer to those countries which were once known as the “third world.”

And if you doubt that, all you need to do is read the Jamal Khashoggi statements from Trump.

It’s enough to convince anyone that America is quickly closing the gap between it’s status as a paragon of right and wrong and the likes of the Philippines’ Duterte, and China’s Xi. 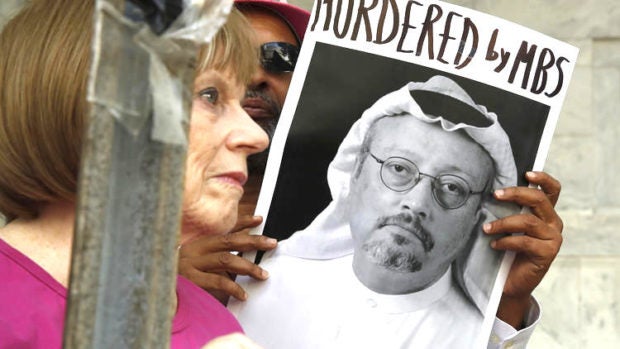 When the Khashoggi story broke in October, I refrained from further comment  only because so much was unknown about the death.

But now it’s clear Khashoggi was murdered. The Turks have the evidence, supplied it to the CIA, and Trump has been briefed.

And what does Trump do? He shrugs.

“It’s a complex issue,” said Trump to reporters on Tuesday at the White House as he left for Florida. “It’s a shame, but it is what it is.”

You’d expect something more than that. But the bottom line is the bottom line. As the businessman turned politico Trump indicated, it’s all about “America first.”

He’d rather be foolish with the truth and play things dumb like a fox.

In an earlier statement Trump  said:  “Representatives of Saudi Arabia say Jamal Khashoogi was an ‘enemy of the state’ and a member of the Muslim Brotherhood, but my decision isn’t based on that—this is an unacceptable and horrible crime… King Salman and Crown Prince Mohammad bin Salman vigorously deny any knowledge of the planning or execution of the murder of Mr. Khashoggi…Our intelligence agencies continue to assess all information, but it could very well be that the Crown Prince had knowledge of this tragic event—maybe he did and maybe he didn’t.”

If it is an “unacceptable and horrible crime,” then why doesn’t the U.S. do more in the matter? Khashoggi was a green card holder and a columnist for the Washington Post.

And his loyalists march along to his irrational conclusion.

Secretary of State Mike Pompeo sounded just like the president. “It’s a mean, nasty world out there,” Pompeo said at a briefing. “It is the president’s obligation and indeed the State Department’s duty as well to ensure we adopt policies that further America’s national security…the United States will continue to have a relationship with the kingdom of Saudi Arabia, they are an important partner of ours.”

And with that buttressing of the president, there should be no doubt, America is no longer one of the good guys. We’re the bad guys now. Officially.

American values once synonymous with freedom, liberty and human rights, now are no longer rigid, but flexible, and easily dismissed with that meaningless phrase, “it is what it is.”

The kind of thing you’d expect from a gangster or Mafia don. Not the moral leader of the free world.

But this is what happens when Americans are so fed up with their dysfunctional democracy  they stop paying attention and start thinking it’s all right to outsource the government to someone who will run it like a business.

Voters did that in 2016. That got us Trump. And now everything he touches triggers off to some degree a constitutional crisis. Fire the attorney general; put in a new non-Senate confirmed temp A.G. in charge of the Russia investigation; go after the CNN White House correspondent, only to back down; revise immigration and asylum laws, only to have a court strike it down.

And that’s just one week.

In the words of the Filipino American spouse of Trump aide Kellyanne Conway, the Trump presidency is a “shitshow in a dumpster fire.”

That happens when you have a president who truly doesn’t know what he’s talking about and only cares about anything if it involves his private sphere. Trump is anti-democracy at his core.

Even the worse Republicans didn’t take it as far as Trump.

George Bush the First may have backed Marcos, but he was smart enough to stand up to human rights and  call the Chinese leaders who squelched democracy in Tiananmen Square “the Beijing Butchers.”

But maybe it’s time he did.

Embarrasment of riches, or stupidity

Trump missed a big chance over the weekend to show that he is more than the shlub president who would rather be the shlub king. He had another opportunity to be our consoler-in-chief. Believe me, we root for these moments to salve the stupidity of the Trump administration. Butte County, the scene of the worst wildfire in California history, is the perfect set up. It is the anti-California stereotype. Not the suburbs, the foothills; what I call the ruburbs. 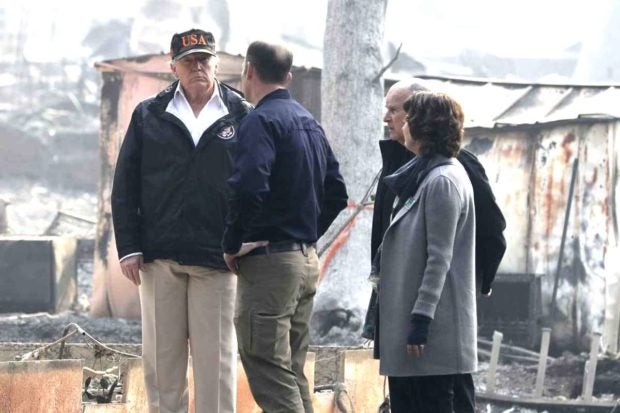 Butte County is the Red Part of the Blue state. It voted against the Democratic Governor-elect Gavin Newsome, giving the anonymous Republican opponent, John Cox, a landslide victory. It voted against the victorious Democratic icon, Senator Dianne Feinstein. Unlike Orange Country, which was the bastion of Reagan-era Republican conservatism, it didn’t flip blue. Butte County stayed red.Most importantly, Butte County is right in Trump’s demographic wheelhouse: 92 percent white. About 1 percent Asian American. It is as far away from California while still being in California. It’s totally Red.

But the most prominent red since election day were the flames that destroyed nearly the entire city of Paradise, leaving a rising death toll of near 80 and more than 1,000 missing. This is Trumpville. He is their hero. With a bipartisan group of political leaders respecting decorum and accompanying the president, the lasting memory is of Trump calling the city of Paradise, “Pleasure.”  A “P” word mix up? Like that “Access Hollywood” tape?  The “pleasure” for “Paradise” gaffe is all on tape, and it’ just sad. The president is a legit laughing-stock.

And then there was the Finland raking remarks, as if California could learn from forest management skills of small country, which is normally covered with snow? Climate change, oh no. Corporate malfeasance from PG&E, the utility company? Oh no. This was an issue of raking of the forest floor. Trump said he had a conversation with the president of Finland. The Finnish leader denies any such conversation. This was supposed to be a feel-good event, but the president even whiffs on the softballs now. Mark the things that don’t belong. Trump in the White House?  If it’s still not clear, it should be now. You can’t blame it on the bad air.

HAPPY THANKSGIVING: To all you seitanists out there, save a turkey, share a meal. And avoid any Trump indigestion. Read the Constitution.  You’ll see, we all have plenty to fight for and protect,  and a lot to be thankful for. Still.

Emil Guillermo is a veteran journalist and commentator. He writes a column for the Inquirer’s North American bureau. Twitter @emilamok . Search for him on Apple Podcasts.