Filipinos among thousands who lost homes in California fire

Filipinos among thousands who lost homes in California fire 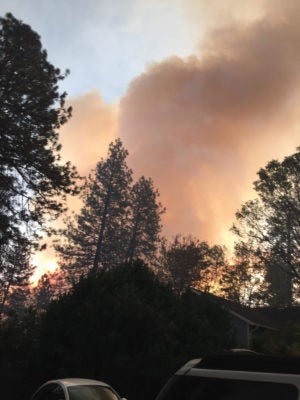 More than 9,700 homes have been destroyed in the Camp Fire in California. AJPRESS

LOS ANGELES — The Camp Fire in Northern California became the deadliest wildfire in the U.S. in a century, burning through 141,000 acres and leaving about 9,700 homes destroyed as of Friday, Nov. 16. Filipino families were among the people who lost their homes.

As of Friday, more than 600 people were reported missing as the death toll rose to 63, making it also the deadliest and most destructive in state’s history, according to various sources.

In the now consumed wood town of Paradise and the half- scorched town of Magalia, a close-knit community of roughly 30 Filipino families are now without homes and face challenges of finding new places to stay and figuring out what their future holds in the town.

“They are all over the place,” Gemma Clow, vice president of a community group of Fil-Am families in Paradise, told the Asian Journal.

On the group’s Facebook page, a post notifies the community that its 28th annual Christmas party has been canceled due to the fire, and will resume during the holidays next year.

Clow, who has lived in the Paradise and Magalia area for 16 years and whose house was among the very few spared, is currently staying in Folsom—a roughly two-hour drive away—while evacuations are still in order.  Before that, her family stayed with a family friend in Chico for five days.

Many of her friends have been in the area for over 20 years, and are now finding themselves in evacuation centers and in nearby cities of Chico, Gridley, Orland and Oroville. Others have gone farther to cities like Manteca, and even out of state.

The community group’s president, Eric Junio, was among those who lost their homes.

“Almost everyone lost everything as there wasn’t enough time to pack, there was no warning of the fire,” said Clow.

Clow learned about the fire the morning it started burning, but it wasn’t immediately clear how much damage it would create. 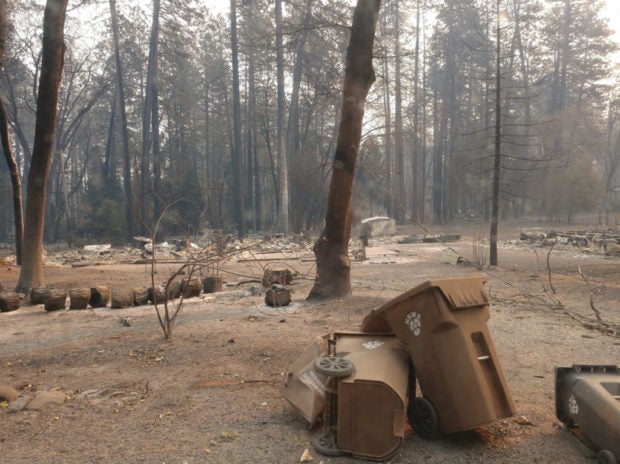 The Camp Fire reduced homes to ashes, including those of some Filipinos in the town of Magalia. AJPRESS

She was driving along Paradise’s Skyway road to take her son to school and noticed the sky was dark and smoky; but like others, she proceeded with her day and went to work. She works at the partly damaged Adventist Health Feather River hospital—the same hospital where a nurse made headlines after driving through the city to help evacuate patients.

A couple hours later, she heard knocking on her office door and someone yelling that everyone needed to be evacuated.  She immediately called her son and picked him up at Paradise High School. Together, they got home and her family began to pack despite their neighborhood not being under evacuation.

The following day, the evacuation order came for Clow’s family, and they decided to make their way to Chico.

“On the way to Chico, we saw lots of houses already burned in Magalia.  It got worse when we got to Paradise,” said Clow, adding that her son filmed the entire drive.

“We were driving with fires on both sides of the road still going—small fires here and there, electric wires hanging, sparkling,” said Clow.  “The drive to Chico seemed forever, and it was the scariest I have ever experienced in my entire life.”

Roughly 27,000 residents made up the town of Paradise, and as much of the town lies in ashes, there’s no telling yet how many will return.

Clow thinks it will take months, if not years before the power is restored.  She said that while her family’s home didn’t burn, the entire area remains without electricity and water, and it’s still unclear when they can return.

She added that some people are choosing not to rebuild their homes.

The Filipino community was started 28 years ago by a group of friends who have since passed on duties to new Filipinos in the area.

The number of guests who come to the Filipino group’s annual Christmas has become so big that they began renting venues to host the parties about 10 years ago.

On the current situation of the community, Clow said that they are devastated with happened to the fellow kababayans in the entire Paradise, Magalia, Concaw and Pulga communities.

“What happened to us is unfathomable,” said Clow. “The worst part is losing everything that we have worked for and all the memories that can never be replaced.  My heart goes out to all the people that were affected by the Camp Fire.”

She did stay positive, saying that their presence in the town wouldn’t be gone for good.

“We will be back and will rebuild,” said Clow.  “Paradise will be ‘Paradise’ again. It may take years, but we will do it one day at a time.”

In Southern California, the Woolsey Fire, which began burning a week ago, was nearly 70 percent contained by Friday morning, November 16. Crews have been aiming to have it fully contained by Monday. Officials said the blaze burned through 98,362 acres, damaged 183 structures, and left roughly 616 structures destroyed. Three people have died in the fires, with many others injured including three firefighters.

In Southern California’s Ventura County, firefighters announced the Hill Fire as being fully contained on Friday after blazing through 4,531 acres since it began burning the same time last week.

While firefighters are expecting cooler temperatures and possible rain ahead in Los Angeles to secure containment, hundreds affected—especially in the Malibu, Bell Canyon, and surrounding areas—remain displaced and unsure of the future.

On Thursday, November 15, Governor Jerry Brown and Interior Secretary Ryan Zinke visited affected areas of the Woolsey Fire and said that better preparation would be needed in the future.  He described California’s situation as “the new abnormal.”

“We have a our work cut out for us,” said Brown at Freedom Park in Camarillo.  “It’s so beautiful here, but having so many people living in this space, we are going to have to make a lot of changes.”

Acknowledging the effects of climate change, he added that forest management would be improved, and that cities would be built “more smartly.”

“It will be expensive,” he added.  “We’re not talking hundreds of millions, we’re talking tens of billions for the whole state of California.  But it can be done, with science, with research, with collaboration and with a lot of good will. We all pull together in solidarity, keeping California green, keeping it a wonderful place that we all love.”