Congressman Gary Alejano talks about his ideas, principles and plans in taking his biggest political challenge yet — running for senator in next year’s elections in the Philippines. INQUIRER/Jun Nucum

SAN FRANCISCO — A former rebel soldier aspiring to be a Philippine senator vowed to be true to the original principles of his fellow mutineers and not be eaten by the political system that “does not really help” ordinary Filipinos to rise from poverty.

During his San Francisco visit hosted by the Filipino American Human Rights Alliance (FAHRA), Alejano also paid tribute to Filipino World War II veterans and their widows and helped gave them medals symbolic of their sacrifices and struggles awarded by Justice for Filipino Veterans (JFAV).

Donny de Leon of FAHRA introduced Alejano as the congressman who filed the impeachment complaint against Philippine President Rodrigo Duterte in 2017 extrajudicial killings and other high crimes. De Leon noted that ABS-CBN recognized the Magdalo partylist as the Most Productive Partylist while Ajejano himself was named one of the top congressmen of the Philippines by the Publishers Association of the Philippines.

Alejano said he did not consider himself a traditional politician, who customarily tries to amass wealth while in position in order to finance his reelection. “Once you compromise yourself, forget about the principle that you are fighting for.”

Magdalo soldiers, Alejano claimed, entered politics in 2007 while in jail to bring “the issues to the people.” “We agreed that we would enter politics, but we would not allow ourselves to be eaten up by the system. That is why we can boldly challenge anybody on the issue of corruption. That was when Senator Antonio Trillanes IV won for Senate. He ran for the cause and not for himself. Up to now he is pursuing the cause of the Magdalo and the cause of the people,” Alejano continued. 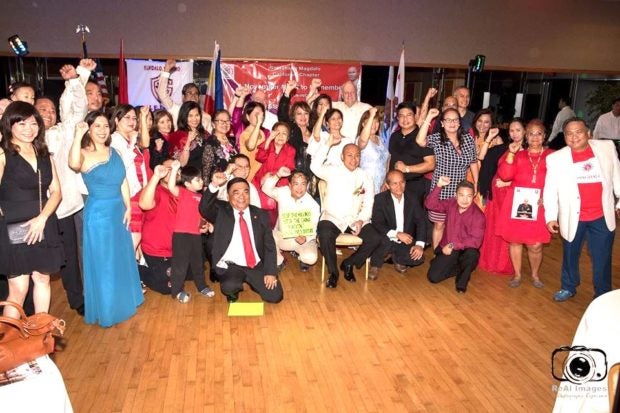 He is running for a Senate seat e hoping that the Upper Chamber would not be populated by President Duterte’s allies who follow whatever the president wishes, just like the majority of the House of Representatives.

Alejano said that Magdalo members’ exposure in the field enabled them to learn about the sufferings of the people who are not given enough and proper government services, causing the poor to turn to insurgents. He blamed the absence of a “clear and sustainable policy direction” by the government.

“The government is the biggest recruiter of rebels in the country when those running the government are also those that greatly benefit by stealing the country’s wealth resulting poor government service, then the people have no choice but to become rebels in protest for what is happening.”

He said further: “That is why we understand the feelings and predicament of our kababayan who have no option just to survive. That is why it is important to always keep the option for peace talks open because the security problems in the Philippines cannot be solved with military solution alone.”

It should be holistic approach, he said, where the different government agencies coordinate and come up with a unified solution to the problems. 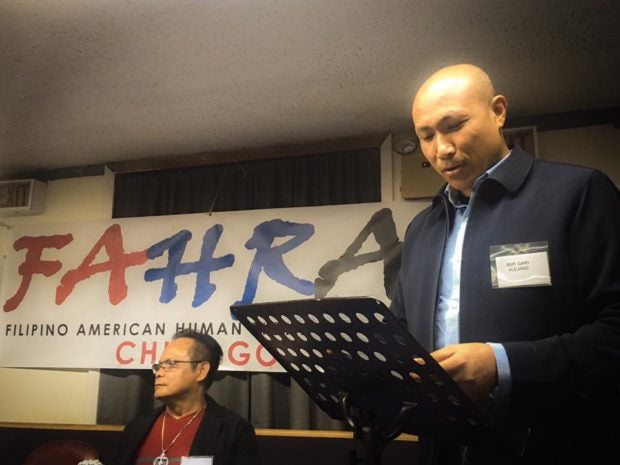 Rep. Alejano speaking at a forum in Chicago hosted by the local chapter of Filipino American Human Rights Alliance. CONTRIBUTED

“The war on drugs is a tool to create an atmosphere of fear. An ordinary person seeing so many people being killed on the streets every day will also would be scared,” Alejano stated. The supply of drugs in the market has not been reduced despite all the killings where the very poor get killed for a single sachet of illegal drugs, while the president has little to say about huge shipments of smuggled narcotics from China.

Alejano did not recommend extraconstitutional means to change the administration, saying a military coup is very dangerous. “Let us allow the dynamics of the situation to play out. Also, we are asking Malacañang to disclose the real state of the President’s health. He cannot hide it for long because it has serious security implications.”

Rodel Rodis of the US Pinoys for Good Governance presented Alejano an anti-China occupation T-shirt and asked for a law to celebrate July 12 as Philippine Sovereignty Day, “to honor our victory in The Hague on July 12 and make everyone especially the students aware that we won our case” against China’s incursions. Alejano promised to file a bill in the present Congress.

Alejano delivered similar messages to Filipino Americans in Los Angeles, where he was hosted by JFAV led by Art Garcia and Magdalo USA led by Remy Medina; in Chicago the FAHRA chapter led by Jerry Clarito arranged his visit.