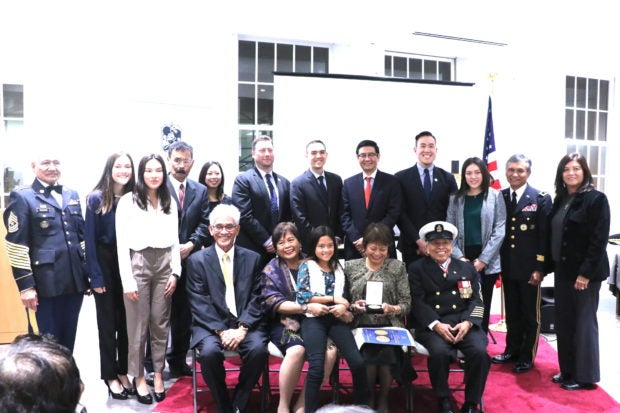 WASHINGTON, D.C.– The Filipino Veterans Education and Recognition Project (FilVetREP), in partnership with the Philippine Embassy, led the first anniversary celebration of the awarding of the Congressional Gold Medal to Filipino World War II veterans on Wednesday, Oct. 24.

“Your fathers and grandfathers left a priceless legacy that we can never hope to repay, but one that we vow to always preserve and cherish. But more than that, they also personify the close people-to-people ties that bound the Philippines and the United States for the last 70 years, and will continue to do so in the coming decades,” Philippine Embassy Deputy Chief of Mission Patrick A. Chuasoto told the families of nine Filipino World War II veterans who were awarded the bronze replicas of the gold medals during the anniversary celebration at the Philippine Embassy Chancery Annex.

The celebration started with the Georgetown University Army ROTC Color Guard’s presentation of colors followed by the singing of the Philippine and US national anthems.

David Do, director of Asian and Pacific Islander Affairs and Ely Ross, director of the Office of Veterans Affairs, both of the DC Mayor’s office, each delivered brief remarks, while Ben De Guzman provided an update of FilVetREP programs.

“These brave Filipino and Filipino American soldiers were crucial to both the United States and the Philippines, and I commend these veterans for their outstanding contributions. Over the last year, you have increased national awareness of conducting over 40 events around the nation and providing over 1,000 bronze replicas of the Congressional Gold Medal to veterans or their surviving family members,” said DC Mayor Muriel Bowser in a letter addressed to FilVetREP and delivered by David Do.

“No one waits 75 years to be recognized. But there are others out there who are not able to attend ceremonies like this, and we are going to continue to exhaust ourselves and run across the country to award the medals to living World War II veterans or to their next-of-kin. It is our mission – this is a “WE” mission – in order for us to honor them,” Major General Antonio Taguba (Ret.), Chairman of FilVetREP, reiterated in his closing remarks.

Margaret Lacson-Ecarma served as the official emcee of the program.

The United States Congress formally awarded the Congressional Gold Medal to the Filipino Veterans of World War II in a ceremony held at the US Capitol on 25 October 2017.