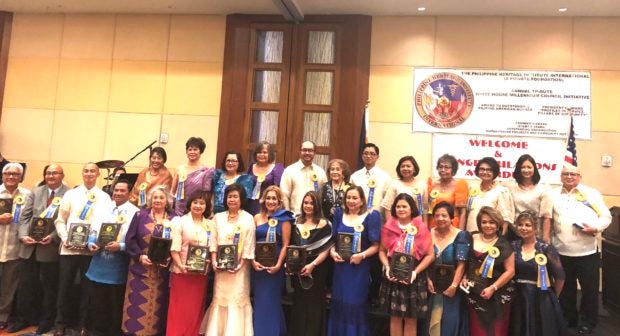 The Long Beach Marriott teemed with nurses, doctors and their families dressed to the nines to honor their own. It was the best time and place to have a medical emergency.

PHII was established in 1989 for the advancement of Filipino Americans through youth development programs, volunteerism, and the promotion of Filipino Culture. Its late founder, Naomi Palma Armada, was inspired to create the “Millennium Recognition Awards with the theme “Honor the Past, Imagine the Future” after a poignant 2009 meeting with and President Bill Clinton and wife, Hillary, when they came to Los Angeles to promote their initiative the “White House Millennium Council.”

Armada had explained that she chose the award’s name “to pay tribute to outstanding individuals whose contributions have enhanced the quality of life in the community. I also chose our nurses for their hands-on above and beyond compassionate service, volunteerism and their sheer numbers in the Healthcare workplace. People stranger to me were positive in their response to my choice. Each one has a nice thing or two to say about Filipino nurses who have touched their lives and their loved ones at vulnerable moments.”

Filipino medical practitioners, particularly nurses, have been a visible presence in many hospitals across the nation. Many swear by their professionalism and exceptional caring and compassion; yet, they are taken for granted and is even “invisible” to Hollywood. Although that has changed somewhat when Saturday Night Live actor Michael Che made mention on national TV during the recently concluded Emmy Awardsthat “TV has always had a diversity problem. I mean, can you believe they did 15 seasons of ER without one Filipino nurse? Have you been to a hospital?” 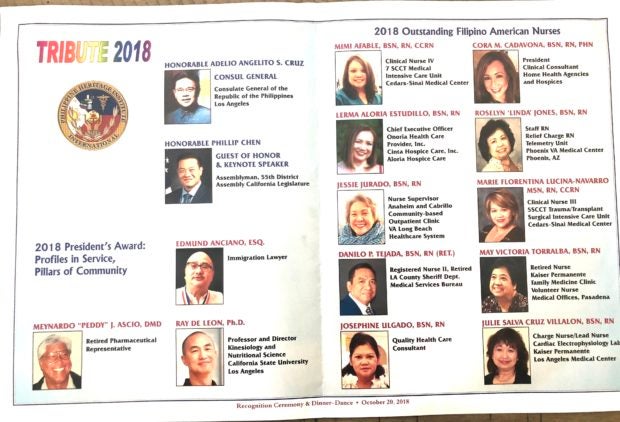 The following individuals were honored for having a great impact on the community with their volunteerism “over and beyond” the usual:

Edmund Anciano, Esq., immigration lawyer formerly with Asian Pacific American Law Center in Los Angeles, CA, a public interest law firm dedicated to immigrant rights and civil rights. He is also a board member of Kalayaan Inc., which plans and organizes the annual Philippine Independence Day celebration in Southern California in collaboration with the Philippine Consulate General of Los Angeles.

Ray De Leon, PhD, professor and director of Kinesiology and Nutritional Science, California State University, Los Angeles. He is a proponent of service learning and is the architect of the Rehabilitation and Therapeutic Exercise curriculum in Kinesiology. His expertise is inexercise therapies for spinal cord injuries and the use of robotic devices during the rehabilitation process. He is the founder of the Mobility Center at Cal State Los Angeles.

Keynote speaker was Assemblyman Phillip Chen, a legislator and Republican member of the California State Assembly which encompasses portions of Los Angeles, Orange and San Bernardino counties. He grew up in the Philippines. Prior to his election to the California Assembly, Chen worked as a health deputy to former L.A. County Supervisor Michael Antonovich. He was also appointed to serve as a Board Member for CA Physical Therapy Board. He is a former LA County Reserve Sheriff’s Deputy.