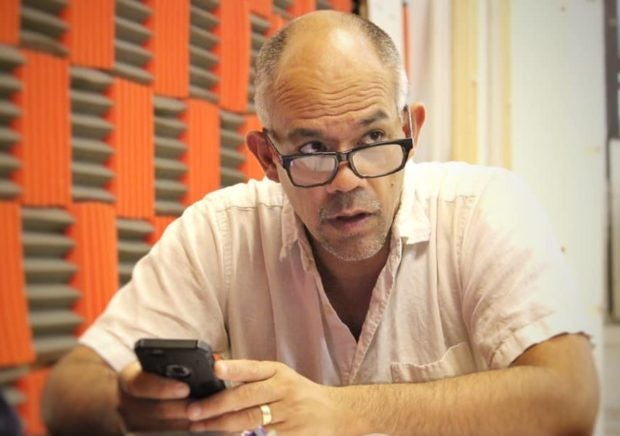 Orlando Pabotoy wrote and acts in the play “Sesar.” FACEBOOK

He takes on acting duties in addition to writing the play in this staging by Ma-Yi Theater Company. Ma-Yi won the Ross Wetzsteon Award from the 63rd annual Obie Awards earlier this year (READ about it here.)

The work depicts the story of a teenaged Filipino boy who locks himself in the bathroom after having seen an excerpt of Shakespeare’s “Julius Caesar” on a television show.

The boy’s father, an ex-politician, joins him. The father then uses his own experiences to explain the life of the Roman general-turned-emperor and instructs his son about power, ambition and life.

Pabotoy first collaborated with Ma-Yi when he played the lead in their staging of “peregriNasyon” (a play about the Filipinos who immigrated to the US and worked as farm laborers in the 1920s and 1930s) in the late 1990s. 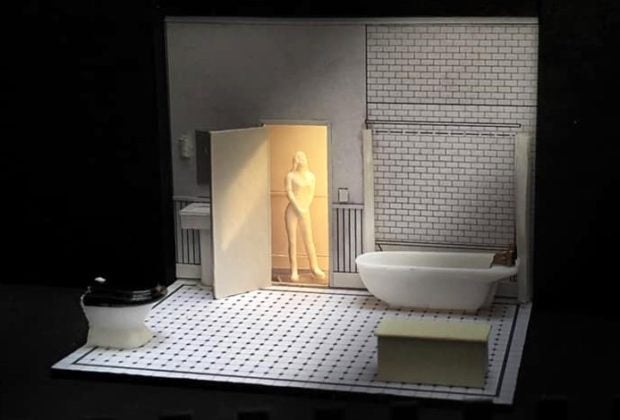 Scale model of the set of “Sesar” designed by Junghyun Lee. FACEBOOK

His other acting credits for the group include “Middle Finger,” “Savage Acts,” “Watcher,” and the title role in the original staging of “The Romance of Magno Rubio” (a play based on a short story by Carlos Bulosan) for which he received a Special Citation (along with the entire cast) from the Obie Awards.

Pabotoy also directs, is cofounder of The Clown School in Los Angeles, is founding artistic director of Artigiani Troupe in New York, and teaches acting at The Juilliard School (his alma mater). He’s worked at theaters across the country such as The Public, Yale Rep, the Guthrie and Kirk Douglas.

“Sesar” began when Pabotoy was awarded a Fox Fellowship residency at Ma-Yi several years ago where he began developing what was then a loose construction of scenes around the idea of “home.”

The fellowship grant had allowed him to return to his home province in the Philippines for research. Born in Bohol to a Filipino father and American mother, Pabotoy and his family moved to the U.S. when he was in his teens.

Some of the play’s plot points draw parallels to Pabotoy’s own life: His father was the town mayor. When Pabotoy was in his early teens, he saw Christopher Plummer on The Cosby Showreciting lines from “Julius Caesar” (Cassius’ “The fault is not in our stars” speech). He was so taken that he also went to their bathroom to mull over and recite the same speech.

Nevertheless, Pabotoy says, “This play is not necessarily autobiographical.”

What he intends it to be, instead, is to “truly honor a child’s discovery of the beauty of poetry and language, specifically during chaotic times.

“That discovery is sparked by Shakespeare’s ‘Julius Caesar’ that then leads him—by the guidance of the father—to find the same appreciation in the Visayan language and the language of nature.”

Pabotoy says he can’t wait for his own family to see the play.

“The bathroom is representative of the idea of ‘home,’” he explains. “It offers privacy, safety in vulnerability, space to be one with your own thoughts, or to let the thoughts wander while you cleanse.” 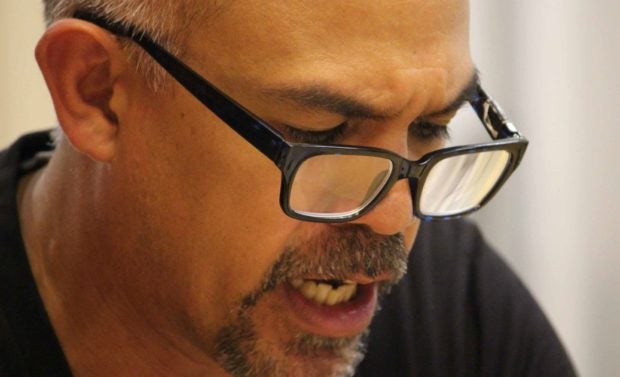 Pabotoy has collaborated with Ma-Yi Theater several times before. FACEBOOK

“The trip to Bohol and Manila informed the sensorial development of ‘Sesar’ the most. It was two or three months after Typhoon Haiyan and the earthquake,” he says.

“The thematic presence of storms in this play was influenced by that visit.”

“Sesar” also touches on other themes that are currently in the headlines.

“It’s not a show that aims to preach,” he says. “Though that can’t be helped when there are issues that are in the forefront of our consciousness,” he says.

“I hope, above all, that the audience will enjoy the show and see a different take and light in ‘Julius Caesar’ seen from the eyes of a 14-year old boy and his father.

“It’s a very unique story of discovering true listening and the resonance of poetry when it is connected.”

Ma-Yi’s artistic director is Fil-Am Ralph Peña, who is directing “The Chinese Lady,” which runs Nov. 7-18. The play is about Afong Moy, the “Chinese Lady” brought to the US in 1834 and put on display to the public for 45 years.