Some consider the Catholic Church as a spiritual institution founded for a spiritual purpose – and only that. And I recall Josef Stalin’s quip to French Prime Minister Pierre Laval in 1935: “The Pope! How many divisions has he got?” (as quoted in Winston Churchill, The Second World War, 1948), which was purposeful sarcasm to point out how on earth a spiritual institution could do anything to help thwart the escalating military threat of Nazism.

But the Catholic Church is more than a spiritual institution. Apparently using “the strategy of non-coercive power” (Deus Vult: The Geopolitics of the Catholic Church, 2010), the Church runs 5,500 hospitals, 18,000 clinics, 16,000 homes for the elderly and those with special needs, with 65 percent of them located in underdeveloped and developing countries.

Consider Caritas, the confederation of Catholic aid agencies that spent billions of dollars for poor humanity. Then sum up all the small-scale charitable projects of more than 200,000 Catholic parishes around the world and those of individual religious orders such as the Franciscans, Jesuits, Dominicans, Opus Dei, Vincentians, and others.

Christians are only following the footsteps of Christ. The historical Jesus had a social mission, in addition to His mission of evangelization. The total liberation of the human person was foremost in the life and death of Him crucified, who was indeed never indifferent to the sufferings of others.

Jesus’ concern was not limited to the forgiveness of sins. He cured the sick, many of them, cleansing lepers, making cripples walk and the blind see. He fed the hungry, thousands of them. and so were His Apostles and the early Christians.

In obedience to her historical Founder, the Catholic Church celebrates the Eucharist and forgives sins (through her ordained Churchmen), as prophet preaches the Gospel without letup and, with the hierarchy and the laity, gets involve with the poor and the marginalized.

The review of the history of medical care begins not with the Monastic Rule of Saint Benedict (AD 480–550) that articulates the tenet: “The care of the sick is to be placed above and before every other duty, as if Christ were being directly served.” 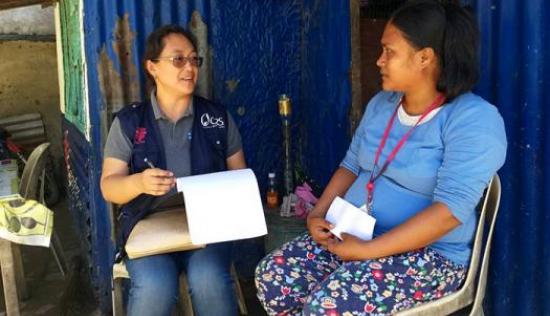 From the Gospel to the early Christian communities to the Benedictine Rule, Christ was the inspiration. The Catholic Church’s institutional apostolate for the sick gave rise to the gradual development of a more systematic nursing and medical care of today.

To fast forward a bit, during the Middle Ages (500 AD to 1500 AD), monasteries, bishops’ houses, and convents became the key medical centers of Europe. The Sisters of St. Paul of Chartres, founded in 1696, are dedicated to nursing, visiting the poor, and taking care of the old and infirm, orphans, and the mentally ill. Today, with operations worldwide, they have about 121 Sisters in the Philippines working in 13 hospitals.

Nursing pioneer Florence Nightingale, who cared for the British troops during the Crimean War (1853-1856), once said: “What training is there to compare with that of a Catholic nun.”

Around 4,500 Missionary Sisters of Charity (founded in 1950 by Mother Teresa) care for hundreds of thousands of poor refugees, mentally ill, the aged and convalescent, sick and abandoned children, lepers, and people with AIDS – in addition to running schools to educate street children and managing soup kitchens around the world.

“The Church, adhering to the mandate of Jesus… during the course of her history, which by now has lasted two millennia, has always attended to the sick and the suffering,” reported the Pontifical Council for the Pastoral Care of Health Care Workers in 2013.

Immersed and yet transcendent, rooted on earth and yet yearning for heaven, the Church does not have all the technical solutions to the problems afflicting the world, Benedict XVI admitted in 2009, days after the G8 Summit in Italy, but she remains “an expert in humanity” who proclaims the Gospel of love and justice.

The Catholic Church aids humanity to be fully alive to give greater glory to God. As Saint Ireneaus nicely put it: “Gloria Dei vivens homo.”

José Mario Bautista Maximiano ([email protected]) is the author of The Church Can Handle the Truth (Claretian, 2017).