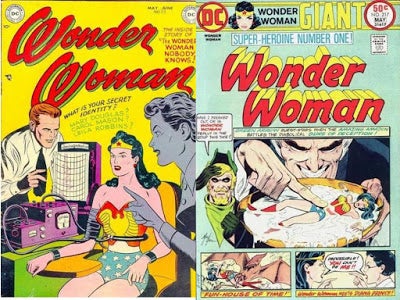 Wonder Woman and Steve Trevor were depictedusing systolic blood pressure measurements at times to identify liars, spies, and signs of deceptions in the comic strips“Wonder Woman,” Sensation Comics#3, Wonder Woman#4 circa 1942.  Many believe these scenes inspired the “lie detector.”

The comic series was created by William Marston, to whom the polygraph “invention” was erroneouslyattributed.  It was John Lorson, a policeman who invented the modern polygraph,the first American police officer bestowed an academic doctorate for the use of polygraph in criminal investigations. Leonarde Keeler is the co-inventor of Larson’s “cardio-pneumo-psychogram.”

The creator of Wonder Woman was a forensic and legal psychologist who firstutilized the “tool” in courtrooms during his practice, which could have caused the confusion. The Committee to Review the Scientific Evidence on the Polygraphin 2003 recognized Marston for “measuring physiological reactions” in attempting to evaluate honesty in criminal proceedings.

Did Marston ever believe in the efficacy or veracity of the results of this invention that was partially attributed to him?

A polygraph simply detects then “translates” emotional reactions into quantifiable lines-in-graph based on one’s physiological reactions. This may be similar to how as an observable indicator of emotion, Pinocchio shows the telltale sign of an extending nose whenever someonesomewhere lies.

A polygraph is basically a physiological recorder.  It assesses three indicators of autonomic arousal: heart rate/blood pressure; respiration; skin conductivity or sweating. Respiration rate and depth are measured by pneumographswrapped around a respondent’s chest. Cardiovascular activity is monitored by a blood pressure cuff. Skin conductivity or sweating is gauged through electrodesattached to a respondent’s fingertips.

Polygraph records physiological changes duringemotion, i.e., during an “interrogation.” Its application is based on the theory that a suspect — guilty of a crime — will be more emotionally aroused by questions relevant to the “crime.”

The often seemingly subtle emotions manifested by a suspect during “interrogation” are objectively “recorded” by the polygraph making a graph of each of the bodily changes as they occur during emotion.

The rub is, as a study by David Lykken suggested in 1981, there is no unique “lie response” that everyone gives when not telling the truth. The machine only records general emotional arousal — it cannot tell the difference between lying and fear, anxiety, or excitement.

Many people believe that a polygraph is an infallible scientific instrument and place confidence in its results. The instrument is based on a cogent psychological principle: humans are likely to become physiologically “stirred up” when they feel so threatened by a question that they answer it untruthfully.

However, many studies suggest that a perfectly innocent person may react emotionally to a critical inquiry — and thus appear to be lying when actually telling the truth due to many influencing variables such as individual constitutions; cultural influences; potential examiner’s biased impressions; “training” as the KGB had learned long ago, or mental state of the respondent.

In forensic psychology for instance, a diagnosed pathological liar or sociopath can feel no anxiety or guilt about anything and thus tell outrageous untruths without showing the slightest emotional ripple, according to American psychologists Kleinnuntz and Szucko in 1984.

In 1983, the Congressional Office of Technology Assessment (U.S. Congress, 1983, P: 4) warned that, the available research evidence does not establish the scientific validity of the polygraph test for personnel security screening.

Three years after, the American Psychological Association (APA) issued a formal statement in part, “…has great reservations about the use of polygraph tests to detect deception.” The polygraph test has been deemed too inaccurate for most state courts, and polygraph evidence is not admissible in half the states according to Lykken in 1985.

The U.S. Congress in 1988 passed a law strictly limitingthe use of lie detector tests for job applicants and employees of private businesses. However, it allowed wide “application” mostly among business sectors. Experts (likely lawyers) forewarn that any employee could be given a lie detector test; the best advice is to remain calm thenactively challenge the outcome of the instrument that erroneously questions your honesty (!).

Some experts nevertheless aver that the polygraph functions more appropriately as a tool in criminal investigation. Police sometimesuse the polygraph to induce confessions by criminals who are scared into thinking that their lies are transparent. Does this mean finding the “right sucker” to “psych”? inquired my kibitzer friend.

Moreover,courts, including the United States Supreme Court (cf. U.S. v. Scheffer, 1998 in which), have repeatedly rejected the use of polygraph evidence because of its inherent unreliability; in spite of it still wide usage.

Studies suggest that polygraph “testing” is a thriving American industry. However, how much personal, legal, and administrative decisions were unfairly influenced or distorted by its results? This is good evidence of psychology misapplied; how psychological principles can be warped when its findings are used unsystematically.

Undoubtedly the validity of polygraph testing remains shrouded in controversies. An underlying problem is theoretical: There is no evidence that any pattern of physiological reactions is unique to deception. An honest person may be nervous when answering truthfully and a dishonest person may be non-anxious, according to Dr. Saxe of Brandeis University.

Drs. Leonard Sexe with colleague Gershon BenShahar, also revealed that there are few good studies that validate the ability of polygraph procedures to detect deception. However, both affirmed, it may, in fact, be impossible to conduct a proper validity study. In real-world situations, it’s very difficult to know what the truth is.

Did the Wonder Womancreator, who popularized the “lie detector,” never waver in believing its efficacy or veracious results? Record shows that Marston appeared as the lie detection expert in a landmark court; the case that led an appellate court to rule and set the enduring legal standard that his own lie detection method should notbe admissible in court.

Moreover, polygraph tests are sometimes used in seeking to convince others of their innocence.  Have you heard about the senator who was accused of committing a crime whereby his lawyer unabashedly recommended he take a private lie-detector test?  If hepassed, they should announce pronto the results in a press conference.

“The ‘lie detector’ is modern ‘witchcraft,’” retorts my kibitzer friend.

Only Wonder Woman can refute.

Dr. Carson-Arenas is a Certified Clinical Psychology Specialist and a former university research director. He is a Behavior Analyst Specialist in Nevada, an educator, clinician, researcher, consultant, and a published author. (Parts of this piece are excerpts from his book, Introduction to Psychology (Understanding Human Behavior), a textbook published by the Rex Publication.  Please e-mail at: [email protected]