Death Penalty: Who’s right, the Pope or the President?

Death Penalty: Who’s right, the Pope or the President? 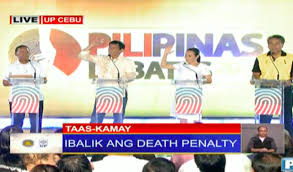 Pope Francis advocates for the abolition of the death penalty. In the updated version of the catechism of the Catholic Church,  the Holy Father declares that capital punishment is “inadmissible” at all times. He closes any loophole, any exception to capital punishment.

President Rodrigo Duterte promotes extrajudicial killing. In his savage war against drugs, now going on two years, over 20,000 Filipinos have died in the hands of police and vigilantes. Duterte claims that state-sanctioned extrajudicial killings are crucial if the drug menace is to be eradicated.

Pope Francis claims, as did his predecessors, St. John Paul II and Pope Emeritus Benedict XVI, that every man, woman, and child possesses a God-given dignity which is to be respected and cherished.  The Catholic Church upholds this ancient teaching, which dates back to the first book of the Jewish Torah. All of us, including drug addicts and criminals, are made in the image and likeness of God. Therefore, no one, not even the government owns the right to exterminate this “imago Dei.”

President Duterte claims that those who use drugs are destroying the Philippines. These addicts cannot claim to possess human rights because they are subhuman, he contends. They are the scum of the earth. They must be terminated.

Pope Francis has spoken about giving even those convicted of crimes the opportunity to undergo rehabilitation. In addressing the United States Congress in 2015, the Holy Father said that “every life is sacred, every human person is endowed with an inalienable dignity, and society can only benefit from the rehabilitation of those convicted of crimes.”

While President Duterte is not shy about ordering police to target those suspected of involvement in criminal activity, there is an increasing global consensus that the dignity of the person is never lost despite the commission of serious crimes.

Capital punishment traces its roots to lex talionis– the familiar “an eye for an eye, a tooth of a tooth.” Senator Manny Pacquiao, in introducing legislation to revive the death penalty claims that his proposal is rooted “in the Bible.” The sports icon turned Evangelical pastor turned senator is correct. Lex talionisappears three times in the Hebrew Scriptures: “If any harm follows, then you shall give life for life, eye for eye, tooth for tooth, hand for hand, foot for foot, burn for burn, wound for wound, stripe for stripe” (Ex 21:24-27; Lev 24:14-23; Deut 19:19-21). 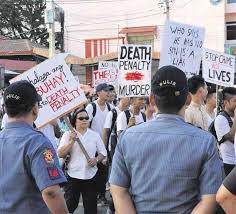 These scriptural passages are cited so often that they have taken on the mantle of folk wisdom – “the punishment must fit the crime.” Mahatma Gandhi’s quick-witted retort was that the eye for an eye prescription endorsed by lex talionisonly ends up making the whole world blind. Rev. Martin Luther King Jr. in leading a non-violent civil rights movement, extended Gandhi’s quip:  “If we do an eye for an eye and a tooth for a tooth, we will be a blind and toothless nation.”

Indeed, a more academically refined exegesis reveals that lextalionisdid not advocate vengeance. Rather, the referenced scriptural texts aimed to stop reciprocal violence. The biblical authors wanted instead to prevent the escalation of violent and bloody feuds, as when Lamech said: “I have killed a man for wounding me, a boy for bruising me. If Cain is avenged sevenfold, then Lamech seventy-sevenfold.” (Gen 4:23).

If Lamech’s hyperbole is unclear, God clearly tells the prophet Ezekiel (33:11): “I have no pleasure in the death of the wicked, but that the wicked should turn from their ways and live.”

And if the Ezekiel text did not suffice, Jesus Christ himself in Matthew 5:38-48 spelled it out:

“You have heard the commandment, ‘An eye for an eye, a tooth for a tooth.’ But I tell you, do not resist an evil person. If anyone slaps you on the right cheek, turn to them the other cheek also. And if anyone wants to sue you and take your shirt, hand over your coat as well…Give to the one who begs from you, and do not turn away from the one who wants to borrow from you.”

The Greek word used in the scriptural passage is “antistenai,” which translates to “violent resistance” or “violent rebellion” against evil or against the evil person.  Jesus intends to break the cycle of violence by teaching us to be loving and compassionate, even to those who hurt us.

Christ continues: “You have heard that it was said, ‘Love your neighbor and hate your enemy.’ But I tell you, love your enemies and pray for those who persecute you, that you may be children of your Father in heaven. He causes his sun to rise on the evil and the good, and sends rain on the righteous and the unrighteous.  If you love those who love you, what reward will you get? Are not even the tax collectors doing that? And if you greet only your own people, what are you doing more than others? Do not even pagans do that? Be perfect, therefore, as your heavenly Father is perfect.”

Does Jesus want us to do nothing vis-à-vis violence and atrocities? Of course not. On the contrary, Jesus speaks against indifference or passivity to evil. If we adhere to Christ’s teaching, we must challenge injustice yet not mimic the violence perpetrated against us. This is a difficult but core Christian tenet, which is exemplified in the lives of Gandhi, Kolbe, King, Romero, et alii.

“The ultimate weakness of violence is that it is a descending spiral begetting the very thing it seeks to destroy,” King said. “Instead of diminishing evil, it multiplies it…adding deeper darkness to a night already devoid of stars. Darkness cannot drive out darkness; only light can do that. Hate cannot drive out hate; only love can do that.”

King’s words ring true as one sees what is unfolding in the Philippines as a consequence of Duterte’s brutal drug war and the President’s zero tolerance for constructive criticism, which is vital in a functioning democracy. Instead of uprooting the causes of the nation’s drug problems, the state-sanctioned killings have only engendered a widespread culture of death, mistrust, hatred, and more violence.

Pope Francis’ latest pronouncement renders the killing of others, even criminals on death row, as inconsistent with Scripture and Moral Theology. Pope Francis has also declared that the Catholic Church must work hard to abolish capital punishment worldwide.

This carries serious implications for the Philippines, the largest Catholic nation in Asia.

Aware that such killings are clearly contrary to Catholic doctrine, will Catholic police men and women continue to carry out Tokhang Operations? And wash their hands by claiming they are simply following orders? Such defense, they should remember, did not exonerate the Nazis at Nuremberg.

What impact will the updated Catechism have on Catholic politicians and legislators who advocate for the return of the death sentence and who support President Duterte’s war on drugs and extrajudicial killings? The image of Christ crucified on the cross is a reminder that we all need God’s mercy. That we must not be eager to impose the death penalty on others.

What are its implications on the general population, for Filipino Catholics who practice their faith? Christ will return in glory to judge the living and the dead. Each of us will have to answer for our deeds and misdeeds, for all our actions and omissions.

If we think the Last Judgment is not for real, why bother reciting the Nicene Creed?