Edgar Jopson, who ‘moved on’ to fight Marcos, at 70

Edgar Jopson would have celebrated his 70th birthday on September 1. I thought of that when I read about how Imee Marcos wanted Filipinos to “move on” from the Marcos years.

Edjop is one of the thousands who wouldn’t be able to move on. The late activist, who became famous for a tense confrontation with Ferdinand Marcos in 1970, died in September 1982, fighting the dictatorship Imee Marcos wants us to forget. Edjop was only 34. 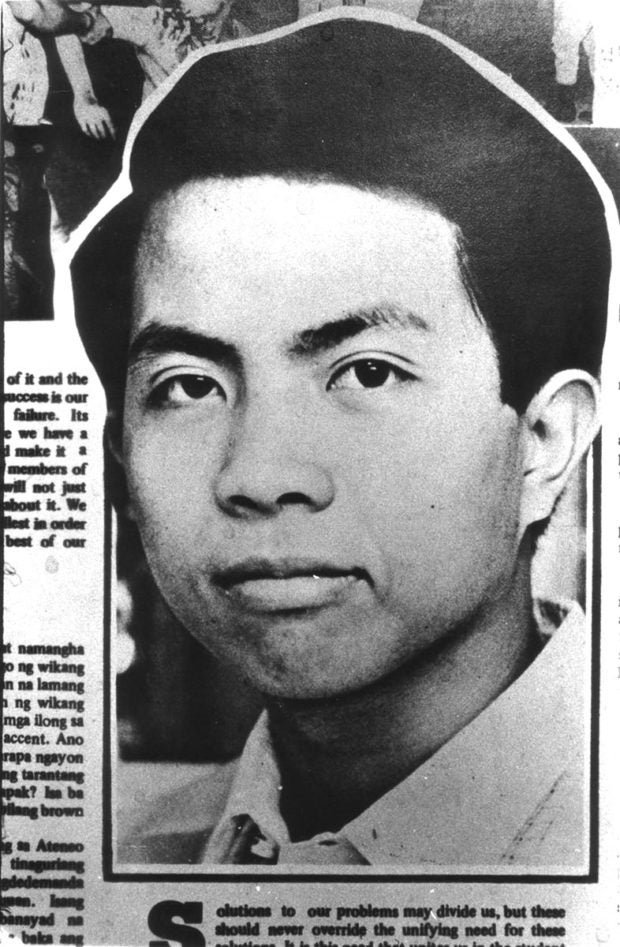 Imee Marcos was 27 when Edjop was killed by his father’s military. She was then head of the Kabataang Barangay. Danilo Concepcion, now UP president, was then a student at UP Law and also served as Kabataang Barangay chairman in Metro Manila.

He and Imee recently had what looked like a fun reunion at UP Diliman. Concepcion has moved on, which clearly made Imee Marcos happy. But many UP alums (like me) aren’t happy.

Concepcion must have realized that it would be difficult for the UP community to “move on” from what just happened. That’s probably why he posted a letter of apology, saying, “I would like to assure the UP community that the University under my watch will never forget the dark period of our country during the martial law years and will continuously hold in high esteem the University’s best and brightest who made the ultimate sacrifice fighting for freedom and democracy.”

Now, that seemed like the principled statement of an Iskolar ng Bayan. But then Concepcion also said this: “My desire to be with old-time friends I had not seen for decades, no matter how briefly, made me overlook its effect on the sentiments of the UP community. Tao lang po!”

‘Tao lang po?’ No, he’s not really sorry. How in the world did UP end up being led by a clueless Marcos loyalist?

But back to Edjop. Although he’s remembered as an Atenista, Edjop was briefly also a Iskolar ng Bayan. He went to the UP School of Law shortly after Marcos imposed martial law, after our nightmare began with the rise of one of the most brutal dictatorial regimes in history.

It was a dark time for the nation. Thousands were imprisoned, tortured, or killed. Any form of dissent was ruthlessly crushed.

Still, Edgar Jopson had the option of simply ignoring all these. 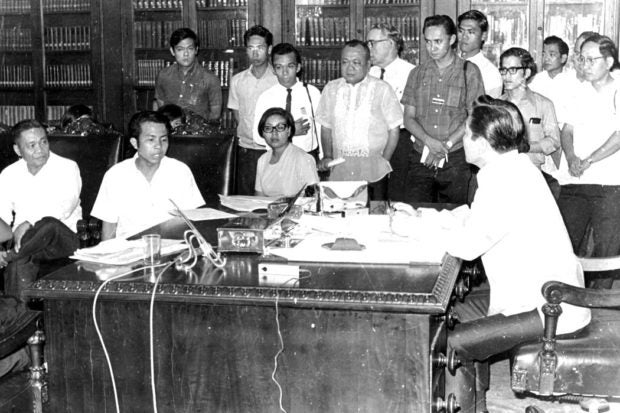 Jopson at the meeting with Marcos where the would-be dictator insulted him.

He was famous for leading the huge student demonstrations against Marcos who actually met with the young Atenista at Malacanang. Edjop dared to ask the president to promise in writing that he was not going to try to stay in power by running for another term. (Marcos had won reelection in 1969 what is one of the dirtiest campaigns in Philippine history.)

The questions irked Marcos who snapped: “Who are you to tell me what to do? You’re only a son of a grocer!”

He didn’t have to be bothered by the plunder and the torture, and the brazen abuse of power under Marcos. He could have chosen a prosperous, successful, secure life.

But like thousands of young Filipinos during those dark years of the Marcos dictatorship, Edjop chose another path. He moved on. He stepped away from that prosperous, successful, secure life, to fight back.

Edjop dropped out of UP Law and became a labor organizer.  He lived for a time in a workers’ community in Navotas and subsequently went underground as the regime became even more repressive. He lived in UG houses in Metro Manila, in barrios in Bataan, in different cities and provinces of Mindanao. He was captured once, imprisoned and tortured. But he later escaped — and quickly rejoined the movement against the dictatorship.

When Imee Marcos, one of the late dictator’s chief defenders, says we should move on, she’s really asking us to forget her father’s crimes, the murders, the tortures, the plunder.

And she is asking us to forget about people like Edgar Jopson who moved on from a safe, comfortable life so the nation could move forward.