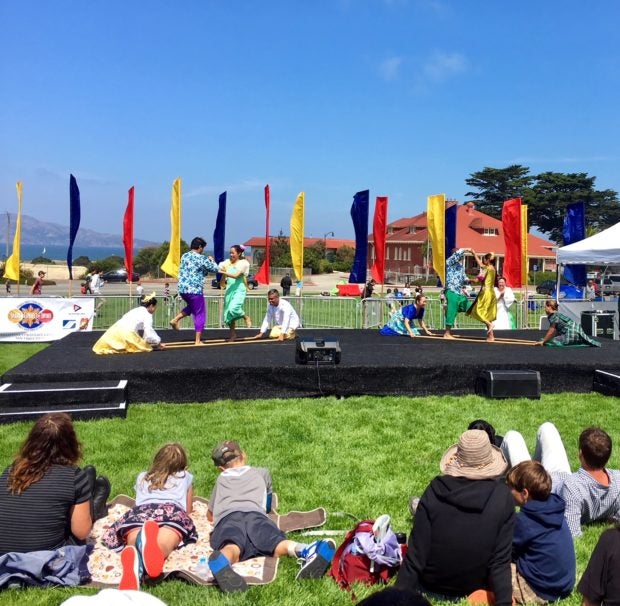 Just before Parangal’s first set, a Zumba lesson led by Gigi Hill-Hopkins, got picnickers on their feet. Known as the Queen of Zumba, Hill-Hopkins is the director of African American holistic wellness at the SF Bayview YMCA. 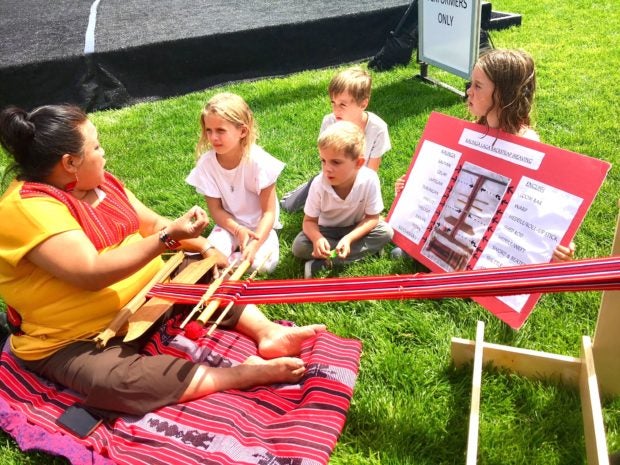 This newest program highlighting the Bay Area’s diverse populations through cultural dance performances, is held every last Sunday at the Presidio’s Main Parade Ground. Its goal is to encourage more diverse visitors to enjoy the Presidio’s stunning views, trails, lodging, picnic and recreational grounds, as well as various cultural programs and exhibitions. The historic Presidio is a part of the Golden Gate National Parks, one of the country’s most visited national parks.

Presidio picnickers can enjoy international cuisine from some 40 rotating Off the Grid food trucks, and last Sunday’s event also included Filipino crowd favorites Señor Sisig, Hookt Donuts, and Jeepney Guy. Visitors can also bring their own food to the grounds.

One of the Pinoy Off the Grid stalwarts, Jeepney Guy’s Chef Dennis Villafranca, did a veggie “lumpia” cooking demonstration onstage in partnership with the Filipino Food Movement and its president, Sonia Delen.

Colorful FFM tables were decked out as Filipino “sari-sari’ stores [mini-grocery stores] filled with treats. The group has been on the frontlines of elevating Filipino cuisine to the global menu. 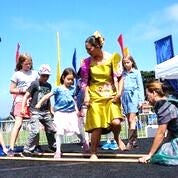 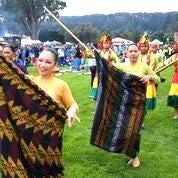 HABIness lead weaver Rachel Lozada mesmerized children as she demonstrated the weaving techniques using a traditional Philippine loom, and many parkgoers had a chance to see samples of their beautiful hand-woven creations.

HABIness provides a window into the revered weaving traditions of the Philippines, such as the indigenous Kalinga “laga”, Maranao “inaul”, Mandaya “dagmay”, traditional Ilocano “abel”, and Antique “hablon.” The organization supports the work of Kalingafornia Laga, the only Filipino weaving circle in North America.

A week before the Presidio Picnic, leaders of the San Francisco Filipino Cultural Center welcomed the community to its newest home for promoting homeland’s heritage and art.

The Presidio of San Francisco is rich in intersections with Philippine history. In 1898, it was the principal staging point for the 20,000-man expeditionary force that the United States sent for the conquest of the Philippines. In 2009, the Presidio Trust presented a powerful exhibition at the Presidio Officers Club called “War & Dissent: The U.S. in the Philippines, 1898-1915,” about the Spanish-American and US-Philippine wars. The exhibit also traveled to the Philippines in the end of 2009, for a three-month showing at the National Museum of the Filipino People in Manila.Last year, the Bataan Legacy Historical Society and the Presidio Trust partnered to commemorate the 75th Anniversary of the Bataan Death March.