‘BuyBust’ is a blood-and-guts winner 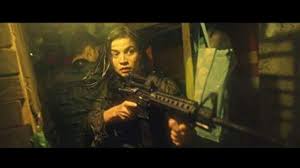 DALY CITY, California — “BuyBust” is a gritty drama about the ongoing drug problem in Manila. It stars Anne Curtis as antinarcotics operative Nina Manigan, who has just survived the slaughter of her entire team in a failed drug bust. Curtis,in this film, may just have reinvented herself as the quintessential female action star of Filipino movies. One can almost forgive the overwrought and overly long fight sequences that feature her, because they feature her.

Filipino movies seem to have progressed exponentially in terms of production quality over the last 20 years. Gone is the hissing sound of the open air in the background audio when a scene is shot outside the sound studio. Gone is the phrase-by-phrase delivery of lines by the actors. Dialogue in the more current movies, certainly in this one, is crisp and natural.  The movie is almost up to Hollywood standards.

All in all, “BuyBust” is worth the price of admission plus popcorn and a soda. It is a movie that action flick lovers will not want to miss. There are plenty of gunfights and hand -to -hand combat.

The fight scenes seem stretched out, and the leading protagonists seem to be invincible and impervious to the innumerable punches and kicks, body blows with wooden clubs and lead pipes, stabbings, and, in the case of the character Rico Yatco, played by real- life 6’4”MMA fighter Brandon Vera, even a frontal shotgun blast to the chest from about five-feet away. 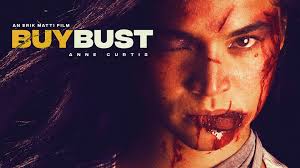 It seems the movie’s entire storyline consists of the almost two hours of fighting between a police squad of maybe seven or eight operatives badly outnumbered by a cast of thousands of dispossessed, desperate, and enraged squatter-area denizens held practically captive in their own slum warren that drug dealers have claimed as their own little fiefdom. The inhabitants of the shanty town, who appear to have sided with the drug dealers against the police officers, just keep on coming armed with lead pipes, hammers, kitchen knives, attacking the stalwart squad of law enforcers from all angles—from below, from above, and at every turn in the dark, wet narrow alleyways of the squatter colony. The location for the movie certainly heightens the fear factor. The torrential rain (real or cinematic) that falls during the operation adds to the grittiness as do the bass-heavy musical score and the dark lighting. Be prepared for lots of blood, the sound of bones and a neck breaking, and even a severed head.

With the extended action sequence taking up practically the entire film, it was able to address the real-world drug problem of the Philippines only tangentially, in the blustery lines of the elusive drug kingpin, Biggie Chen.

Anjo Atayde plays Chen with convincingly insane defiance as he brags, while staring down the barrel of Manigan’s gun, how wide, deep and high his tentacles of corruption reach, daring the bloodied and battle-weary detective to arrest or shoot him.

“BuyBust” is a riveting piece of storytelling in the tradition of the blood-and-gore movies of Quentin Tarrantino, a trophy work by Viva Films and director Erik Matti.