3 types of immigrants at risk of being stripped of U.S. citizenship

3 types of immigrants at risk of being stripped of U.S. citizenship 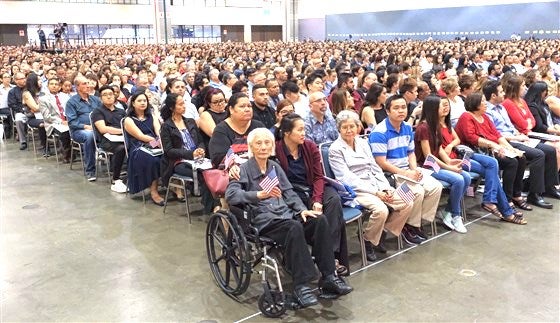 This is file photo of a mass naturalization ceremony. The Trump administration has set up a task force to determine immigrants that should be stripped of U.S. citizenship. AP PHOTO

Denaturalization may be found in Section 340 of the Immigration and Nationality Act. Denaturalizing an individual is initiated by the government through the federal district courts. In the past, it was seldom utilized except in extreme cases like in denaturalization of former Nazis who lied about their past to illegally procure naturalization.

In 2008, Operation Janus was launched by the Department of Homeland Security and identified 854 individuals who had prior removal orders or criminal convictions but were able to naturalize.  These individuals’ fingerprint records were missing from the centralized DHS database.  Now, the current administration is planning to refer 1,600 more cases to the Department of Justice for denaturalization.

Those who are most likely to be affected by the administration’s effort to strip U.S. citizenship from naturalized citizens may be divided mainly into 3 categories. These are immigrants who procured their citizenship illegally because of the presence of:

Once an immigrant is identified for investigation by USCIS for purposes of denaturalization, the matter will be referred to the Office of Immigration Litigation and the Assistant U.S. Attorney. Thereafter, the case will be filed with the federal district court having jurisdiction over the residence of the immigrant being stripped of citizenship. When the case is filed with the court, the naturalized U.S. citizen may present evidence to avoid denaturalization. Note that this is a judicial process and only a federal judge may strip one of U.S. citizenship. There is due process involved and a right to a hearing. If a citizen is denaturalized, most probably this individual will be put in removal proceedings. Whether or not he/she will be deported depends on available relief or waivers.

These days the Immigration and Customs Enforcement (ICE) is not the only agency in charge of immigration enforcement. The USCIS, with the creation of the Denaturalization Task Force, is now also involved indirectly in enforcement matters. Naturalized U.S. citizens must now realize that they no longer have a sense of permanence when it comes to their immigration status.

If you believe that you fall into any of the categories of those who might be affected by this denaturalization effort of USCIS, it is best to revisit and re-examine your naturalization application and have your case assessed by competent legal counsel. And, if there is a possibility of denaturalization, prepare to defend yourself in e federal court and explore applicable waivers or defenses to avoid removal.

Atty. Lourdes Santos Tancinco, Esq. is a San Francisco-based immigration attorney and an immigrant rights advocate. She may be reached at 1 888 930 0808, [email protected] facebook.com/tancincolaw, or through her website www.tancinco.com