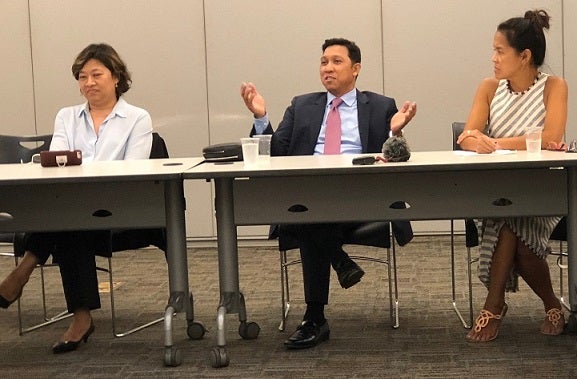 Immigration lawyers Cristina Godinez and Arvin Amatorio speak at the Kapihan forum of the Fil-Am Press Club. At far right is moderator Jen Furer of Makilala TV. THE FILAM

NEW YORK — If you’re an undocumented TNT, chances are people in the community know about it.

Thanks to the corrosive power of “chismis” (gossip), your legal status is likely to pass whisper to whisper by people you know or people you have just met. That’s why some Filipinos who want to remain under the radar steer clear of Know Your Rights forums or immigration clinics, which is unfortunate because they can benefit from information discussed in such forums. Some prefer to go to non-Filipino lawyers to maintain utmost privacy.

Immigration lawyers who spoke at an August 2 Fil-Am Press Club Kapihan forum said undocumented individuals face a much tougher future under the Trump Administration whose “zero-tolerance policy” has led to stricter enforcement of immigration rules.

Under the current government, immigration is now a major concern “on the same level as the economy and national security,” said immigration attorney Arvin Amatorio.

“There are no meaningful changes in the law. The only difference is how this government enforces the law,” said Amatorio, who is also Council President at Bergenfield in New Jersey. “Obama and Bush, before him, and Trump used the same set of laws. The big difference is enforcement.”

“For those with pending removal orders, they will look for you and deport you,” he said.

The leniency of previous administrations is no longer being observed. He cited the example of an immigrant couple who is filing a petition and may have forgotten to attach their marriage license. It happens, he said. Some people submit incomplete applications. Under the current administration, that is a strong cause for a petition to be denied.

Another case is that of a professional whose H-1B visa requires him to work for a company in a specific state. When his company decides to relocate him to another state, authorities will interpret that as a violation of his employment petition. His visa likely will not be renewed, he said.

Rise in arrests of Filipinos

Lawyer Cristina Godinezsaid there has been a 43-percent increase in deportation arrests in the Filipino community for the period January to September 2017 compared with the prior year. 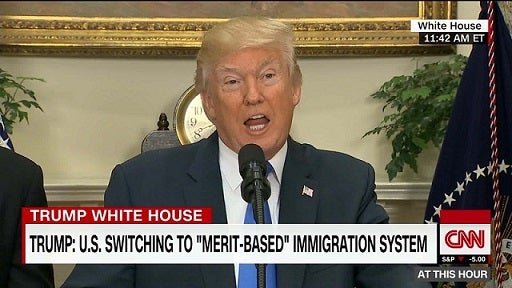 “Merit-based” is likely to replace “family-based” petitions. An immigrant will be approved for a green card based on education and skill set and not because of family ties. SCREENGRAB

She said Filipinos are vulnerable under Trump’s “zero-tolerance policy,” which seeks to limit family-based petitions. Some 85 percent of Filipinos got their green cards through family petitions, she said.

“Donald Trump is trying to reduce legal immigration and wants to focus on merit-based immigration,” she said.

A merit-based green card system, according to a proposal by Senators Tom Cotton and David Perdue, awards points to applicants based on their skills, employment, education, and other factors.

Godinez explained the concept of “denaturalization,” which is causing anxiety over some naturalized citizens. She said the concept came about after it was discovered in September 2016 that more than 800 people were granted citizenship despite incomplete fingerprint records and fraudulent statements in their applications. Those individuals – who are already American citizens — were ordered deported. She believes “denaturalization” applied only to individuals who got their citizenship through fraudulent means.

Both lawyers believe the current “fierce” climate has caused greater anxiety among out-of-status Filipinos, forcing them to continue hiding and remain in the shadows.