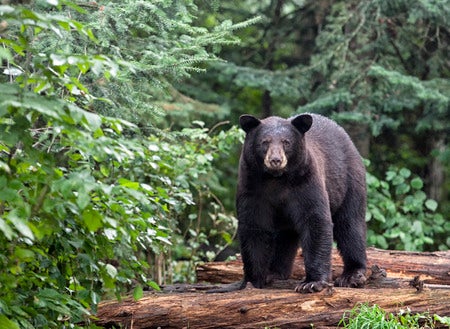 A woman and her daughter from Connecticut recently had to deal with an unlikely intruder in their home — a bear.

Melissa McWeeny shared what her house looked like after she and her daughter Cailynn came back from a doctor’s appointment. She documented the damage the bear had done via a Facebook video she posted on Monday, July 30.

McWeeny recalled that the “big black bear” was in their living room when she and her daughter came home. “She (Cailynn) screams and runs back to the car; I’m standing here like ‘Oh my god, what do I do?'” McWeeny stated.

Moments later, McWeeny said that the animal “squeezed its huge black bear body” out of their door. She then showed how the bear might have entered their own as their door screen was torn down.

More interestingly, it appeared that the bear “had some fun” with their pantry, as food was scattered on the floor. She said: “He didn’t like beans, obviously. He didn’t like all the cr*p food.”

The bear not only broke her headlamp and vase, but also stole some Honey Stingers. “What a bad bear!” she complained.

“I might move in with a big black bear, who’s not as cute as Share Bear,” McWeeny said of the situation. McWeeny added that the bear already paid them a visit the night before and went through their garbage.

“I was scared because I’ve seen incidents where bears have gone into houses but I never thought it would happen to us,” Cailynn said in a report by NBC Connecticut.

The local Department of Energy and Environmental Protection was informed of the incident. The agency is looking into the case, as of this writing.

As for McWeeeny, she said she picked up one lesson after the encounter with the bear. She told WFSB-TV that they will be locking their windows from now on: “Now that he knows there is food in here, I don’t want him to come back.” Katrina Hallare/JB