“Your concern is human rights. Mine is human lives,” is perhaps the most cynical, nonsensical, cold-blooded pronouncement by a Philippine president.

But it is, of course, not surprising that the statement came from Rodrigo Duterte, the leader who inspired one of the most horrific mass killings in Philippine history.

That’s 4,000 Filipinos who were tagged as either a drug dealer or user, and summarily executed. No due process. No hearing. No trial.

And those deaths are just a small part of the picture. Police have also reported more than 22,000 deaths that are under investigation and may have been related to campaign — 22,000 human lives.

Still, Duterte vowed, “This is why the illegal drugs war will not be sidelined.”

In perhaps one of the few truthful statements in his speech, he added: “Instead, it will be as relentless and chilling, if you will, as on the day it began.”

For the Duterte Killings have indeed been relentless and chilling from Day 1, as Looking Back: Day One, Year One of the Antidrug Campaign, a data-driven investigation of the first day of Duterte’s presidency. 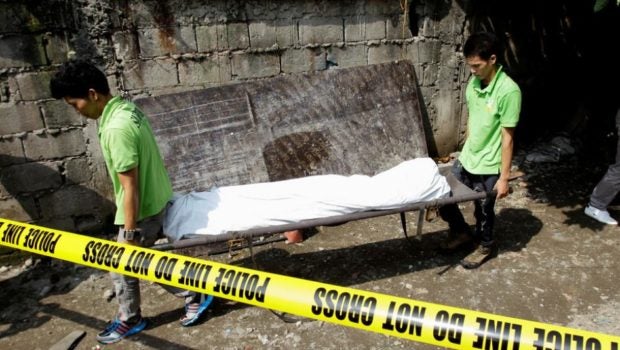 The day Duterte  became president he told police: “Do your duty. and if in the process you kill 1,000 persons because you were doing duty and I will protect you.”

On his first day as president, 39 Filipinos were killed in drug-related incidents, according the The Drug Archive report — 39 human lives,39 human lives lost the day the president who cares about human lives but  doesn’t give a damn about human rights took power.

“It’s been two years since Duterte’s anti-drug campaign began, and according to the police, an average of 33 people have been killed dailysince that first day,” The Drug Archive report said. “Most were poor Filipinos suspected of being small-time drug dealers” — 33 human lives lost. Every day.

Duterte added in his speech: “The lives of our youth are being wasted and families are destroyed, and all because of the chemicals called shabu, cocaine, cannabis, and heroin.”

As of Wednesday, the transcript of the speech posted on the Presidential Communications Operations Office website spelled that last “chemical” as “heroine.”

Duterte continued: “Human rights to me means giving Filipinos, especially those at the society’s fringes, a decent and dignified future through the social and physical infrastructures necessary to better their lives.”

Tell that to that more than 20,000 victims of this murderous campaign.