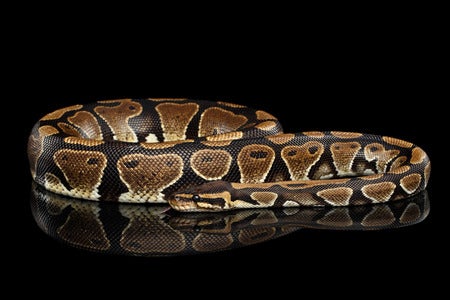 A man in Virginia Beach, Virginia, was surprised when he found something unexpected in his toilet bowl—a python.

James Hooper initially thought that someone pranked him when he saw the reptile—a ball python—sticking its head out in the toilet bowl Thursday night. He shared his weird experience with the python via Facebook.

Hooper then called roommate Kenny Spruill, and had the snake fished out of the toilet and put on a bucket outside his home. “I couldn’t believe it. I was all freaked out at the time. I was like, ‘this is not normal’,” Hooper told WTKR.

The next thing the duo did was call their local Animal Control officer to check out the situation, and later retrieved the snake out of the premises.

“I don’t recall ever having a call or hearing of one for a snake that was actually found in the toilet,” Animal Control Supervisor Rebecca Franklin was quoted in the report. “(It) is one of those things where you think, ‘it can’t actually happen’, but now it has.”

Franklin said that the python was harmless, adding that she believed it followed food inside Hooper’s home before making its way in the toilet bowl.

According to Franklin, the snake’s owners had been looking for the python for two weeks until they saw Hooper’s Facebook post. The snake has since been returned to the owners on Friday morning.

And because of what happened, Hooper has set out a new rule before using his toilet: “Look before you sit down.”  Katrina Hallare /ra