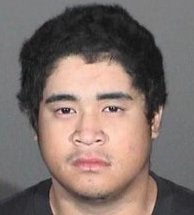 LOS ANGELES – Law enforcement authorities Monday, July 2 have arrested a Filipino wanted for the brutal beating death of a 20-year-old man in the Azusa area in May.

Matthew Martin Capiendo Luzon, 21, had been at large since Julian Hamori-Andrade was killed on May 28. He had a 9-year-old boy and another baby on the way.

Three other suspects, all of them 19 years old, have been charged with the killing: Francisco Amigon; Hercules Balaskas; and Jacob Elmendorf. The suspects and the victim were acquaintances, police said. The motive behind the killing is still unknown.

Luzon was arrested Saturday evening after being spotted near a movie theater in Montebello, the Los Angeles County Sheriff’s Department said in a news release. He booked into jail without bail and is scheduled to be arraigned Monday.

According to a report by KTLA, police believe Hamori-Andrade was beaten at a home, where suspect Luzon lived, along Goodway Drive, where a “large amount of blood” was found.

The victim was apparently then dragged onto the bed of one of the suspects’ truck, beaten again and then thrown off the side of San Gabriel Canyon Road. His body was found two days later.

Filipino at large for brutal murder in So. California