Filipino at large for brutal murder in So. California 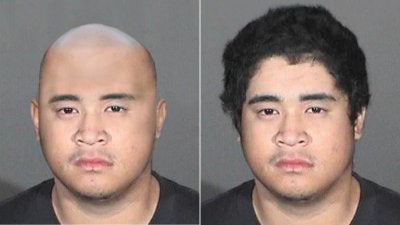 Two images of murder suspect Matthew Martin Capiendo Luzon, one depicting him if his head were shaved. LAC SHERIFF’S DEPT

LOS ANGELES — Police are looking for a Filipino man accused with three others of brutally beating to death a 20-year-old father in Azusa, California.

Matthew Martin Capiendo Luzon, 21, was charged with murder, robbery, and kidnapping on Thursday, May 31, in connection with the death of Julian Hamori-Andrade.

Three other men — Hercules Balaskas, Jacob Elmendorf, and Francisco Amigon, all 19 — are already being held by Los Angeles County Sheriff’s Department on suspicion of the same crimes, according to a report by KTLA News.

He is described as a 220-lb. Filipino man, 5 feet 6 inches tall. He has brown eyes and black hair but may have recently shaved his head.

The Sheriff’s Department warned that Luzon should be considered armed and dangerous.

Investigators believe all five men were at Luzon’s home on Goodway Drive, near Azusa, when the suspects attacked Hamori-Andrade, leaving the residence covered in blood.

The men then allegedly loaded his body into a pickup and drove to Azusa Canyon, where they beat him again before hoisting him over the side of Highway 39. Detectives spent two days trying to locate the corpse.

Anyone with information on Luzon’s whereabouts can contact detective Q. Rodriguez or Sgt. Maurizi at 323-890-5500. Anonymous tips can be submitted via 800-222-8477 or LACrimeStoppers.org.