SAN FRANCISCO – Undiscovered SF, this city’s only and biggest Filipino-inspired night market, returns for its 2018 season on July 21, with more culinary temptations for foodies of all ages.

“One of my favorite parts of Undiscovered SFis seeing all ages come together to shop local, support up and coming Filipino entrepreneurs, and enjoy music and dance,” Rosales adds.

Legendary turntablists DJ Qbert and Shortkut of the Invisbl Skratch Piklz is headlining on the 21st with a rare collaborative set using four turntables.

The brainchild of Kultivate Labs co-founder and executive director, Desi Danganan, and his team, the creative night market broke expectations when it first opened on August 18, 2017 at the SF Mint building and plaza with around 6,000 people in attendance.

Attendance for the 2017 season peaked at 35,000, prompting the need for expansion to a larger venue to allow more guests to enjoy Filipino food, over 50 retail and fashion vendors, experiential art, and a wide array of live performances by popular artists. 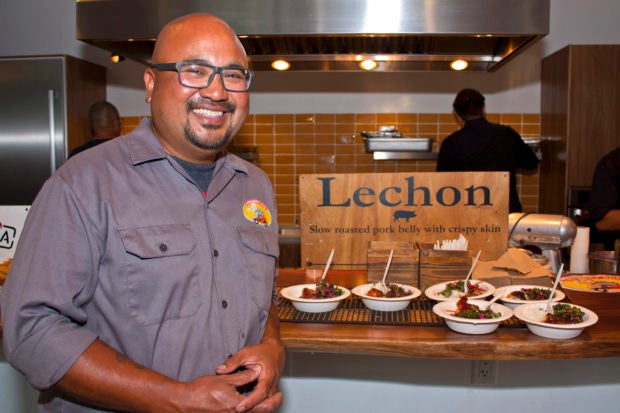 “Last year, we were limited by capacity in the SF Mint, so this year we’re excited to move fully into open public space for everyone to enjoy,” says Rosales.

At a recent food preview reception on June 25, a number of featured food vendors for the 2018 season offered a sampling of the tastes of Undiscovered SF —a mix of savory and sweet foods as well as Filipino-inspired cocktails.

The Lumpia Company, “a roving pop-up that focuses on 100% handcrafted lumpias in ground- breaking flavors,” rolled, fried, and laid out a sampling of its signature fusion lumpia,

Bacon Cheeseburger, its Bicol Express lumpia based on the spicy Filipino dish of the same name, made of ground pork and chiles stewed in coconut milk and served with mango habanero sauce, and its Pork Belly Chips. 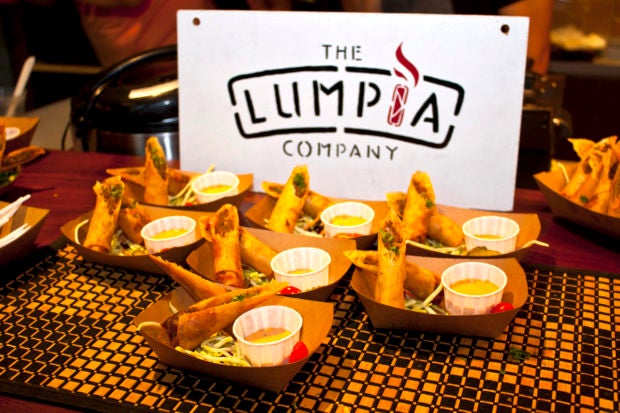 Mestiza Taqueria’s cuisine can be described as post-colonial—embracing Filipino cultural hybridity and Latin American connection brought about by a shared colonial past. Its slogan is apt: Eat Without Borders. “We create food, we create flavors, we’re innovating every day, and that’s what basically enjoying food is all about. Your palate has no judgments,” says Deanna Sison.

Santa Rosa-based Adobos N’ More was thought up by its owner and chef, Hannah Huyoa while sitting in a business class in college. “I saw that there was no Filipino food in our area, so I started a pop up.”

She served her Adobo Tacos—pork stewed in vinegar and soy sauce on jasmine rice topped with purple coleslaw in a flour tortilla.

“Adobo is one of our main dishes in the Philippines, and I believe it’s the easiest to introduce to non-Filipinos,” says Huyoa.

“I like lechon, but whenever there’s a whole pig, I only eat the belly,” says Dennis Villafranca, chef and owner of Jeepney Guy, who served his signature slow roasted tender and succulent pork belly lechon with mouthwatering crackling skin with jasmine rice and a cabbage-kale slaw on the side.

Villafranca started to experiment with pork belly lechon while clueless about its origins. “I had no idea it was going on in the Philippines. It was years of trial and error. I’ve rolled thousands of this lechon.” 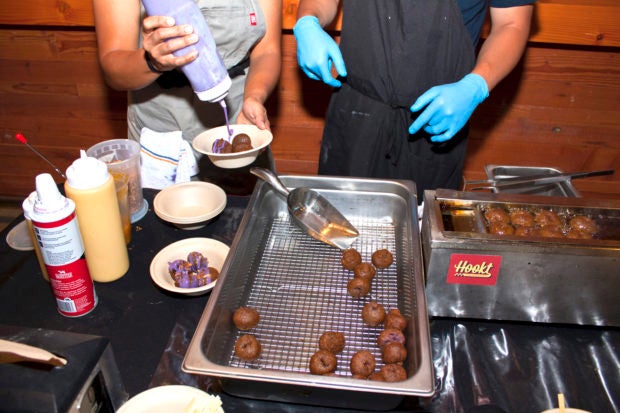 His perseverance in perfecting the dish paid off, resulting in his own version of a well-loved staple of Filipino cuisine.

“It’s our most popular dish. The most interesting part is that most of our customers are non-Filipino. So, it’s our own way of introducing a non-traditional-traditional Filipino meal,” says Villafranca.

For most people, Filipino vegan food is a misnomer, and for a good reason. Filipino food is highly meat-based, and vegetarian substitutions, not to mention vegan ones, often render a pale imitation that lack the rich flavors of a bold yet nuanced cuisine. Nick’s Kitchen, a 100% plant- based Filipino restaurant, has flipped the switch by serving vegan versions of traditional dishes with delicious flavors intact: Sisig, typically made with pork jowls, uses a gluten/soy protein marinated with vinegar, soy sauce, and chiles; Caldereta, a meatless version of the traditional meat stew braised in tomatoes and bay leaves; and egg and dairy free Flan for dessert.

Reina Montenegro started Nick’s Kitchen three years ago while turning vegan. Born and raised in Dumaguete, Philippines, she cites her deep knowledge of the flavors of traditional Filipino cuisine she ate while growing up as an advantage in the challenge of translating these dishes into “vegan Filipino comfort food.”

“I’m not just guessing how it’s going to taste, I know how it tastes,” says Montenegro. “It’s a lot of trial and error. The taste I can capture easily, it’s the texture that’s hard. I want it to taste just like how I used to eat it.”

Nick’s Kitchen boasts patronage from all kinds of eaters who come “for the food because it’s tasty and not because it’s vegan.”

“Many people who are vegetarian and vegan come in and say they never were able to try Filipino food before. We make itp ossible for everyone,” says Melissa Mendoza, a server at Nick’s kitchen

Binka Bites served different flavors of its “traditional bibingka with a twist:” Ube Oreo made with cassava flour with ube frosting topped with chunks of Oreo; and Sans Rival, a bar topped with French buttercream with chopped cashews and merengue.

“We chose to add more western flavors and they work really well,” says Jasmin Ongsiako, co-owner of Binka Bites. “It’s always been our favorite dessert growing up in the Philippines.”

With a Filipino twist to a “classic American dessert,” Hookt Mini Doughnuts served its fresh, made to order signature Ube Coconut doughnuts with ube glaze and toasted coconut on top.

“It’s the only ube mini doughnits that are out here,” says owner, Judy Sison of her line of products with innovative flavors such as Guava Cheese and Champorado Samoa and a variety of toppings and house made sauces such as Leche Flan and Peach Mango Pie glaze.

The brand name Oodaalolly is a mouthful, but in a good way. Its owner and chocolatier, Hernan Lauber, says it comes from his son’s favorite Disney cartoon.

“It’s meant to be an expression of joy, which is what we want people to feel when they eat our chocolate,” says Lauber.

Lauber, whose stepfather is a Swiss chocolatier, grew up making chocolate. He currently sources world-class single origin cacao directly from Davao, Philippines while awaiting his own cacao plantation in Calinog, Iloilo province to mature.

“A lot of [chocolate] makers go to different parts of the world. My thought is, “let’s find what’s there in the Philippines, refine it, and make it as good as possible,” says Lauber. 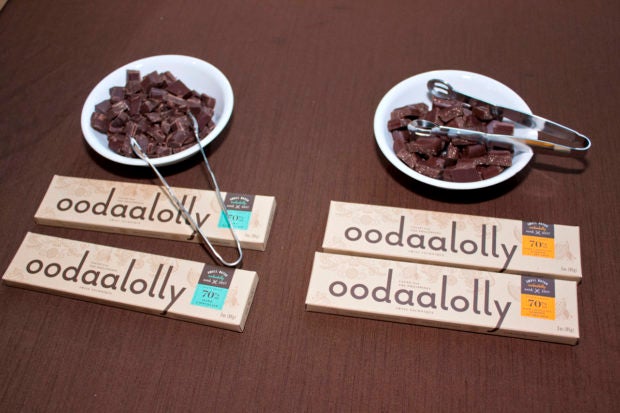 Established in April 2016, SOMA Pilipinas, Filipino Cultural Heritage District, is an expansive legislated area bounded by 2nd Street to the east, 11th Street to the west, and Brannan Street to the south.

Undiscovered SF is a non-profit venture designed and operated by Kultivate Labs in order to “jump-start economic activity and public awareness of SOMA Pilipinas” as part of a multiprong strategy to build a thriving commercial corridor in SOMA Pilipinas by the year 2020.

The master plan is “the reconquistaof SOMA with vibrant Filipino restaurants, cafés, bars, nightclubs, and innovative retail concepts,” says Desi Danganan. “Some of them you can’t even tell that they’re Filipino because they’re just Filipino business owners who’ve just taken something and perfected it.”

According to Danganan, looking at new models of developing Filipino businesses is key in building a Filipino cultural district.

“We just don’t want to pigeonhole people and be like, “Hey you wanna sell fruit? It has to be mangoes.” It’s not about that. It’s really about being the best entrepreneur, the best trade person, the best craft person that you can be,” says Danganan.

Danganan envisions a future in which Filipino culture has become a distinct and lucrative thread in the fabric of mainstream America.

“Imagine a future that we do so well in promoting our culture, our flavors, and our vibrancy, that other non-Filipinos start to jump on the bandwagon,” says Danganan. “Our culture is going to evolve and mutate in ways that we can’t even imagine.”