SAN PEDRO, California –A book talk on We Were There Too, Uncle, a collection of stories and essays about civilian prisoners in Japanese-occupied Philippines during World War ll, will be hosted by Philippine Expressions Bookshop on June 30.

According to bookshop owner Linda Nietes-Little, the Japanese Occupation is a dark phase of Philippine history, and more young people should really know what happened then in order to better understand and appreciate the sacrifices of those who died for freedom. Filipino soldiers fought bravely side by side with American soldiers. 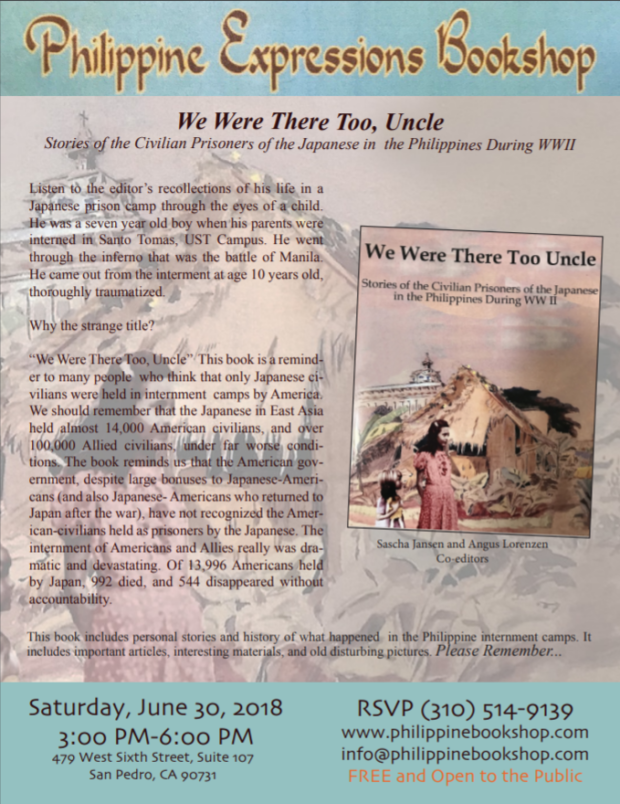 It has been 73 years since WWII ended, but the “scars and trauma have remained in the Filipino psyche,” Nietes pointed out.

“While we may have forgiven the atrocities of the Japanese, we should not forget this phase in our history so that history will not repeat itself,” Nietes added.

We Were There Too, Unclerecounts allied prisoners’life in captivity by the Japanese Imperial Army at the Santo Tomas Internment Camp (STIC) within the campus of the historic University of Santo Tomas.

The book goes through the different perspectives and personal stories of the internees – imprisoned children, housewives, company executives and civilian members of the American, British and other foreign communities caught in Manila by the war. They were rounded up and detained at STIC until liberated by Allied forces guided by Filipino guerrilla forces. They experienced and saw the war first hand, especially the bombing and the Liberation of Manila.

Book Talk speaker and book editor Angus Lorenzen was one of the imprisoned children at STIC. He will share memories of the war through the eyes of a child. He was seven years old when he, his mom and sister were interned at STIC. He came out of the internment at age 10 thoroughly traumatized. A retired engineer with a degree from UC-Berkeley, he now resides in Rancho Palos Verdes, California.

Regular Book Talks are sponsored by the bookshop as part of their community-outreach program. It also increases awareness for the Filipino presence in America. For more information about the book talk, or to RSVP for the event, call (310) 514-9139; or send an email to [email protected].