Will Gina Ortiz-Jones become the first Filipina American in Congress?

Will Gina Ortiz-Jones become the first Filipina American in Congress? Gina Ortiz-Jones in a Filipiniana-inspired blouse. “I am Ilocano.” ANA ISABEL

NEW YORK — A Filipina American is running for a Congressional seat to represent the 23rd district in Texas in November.

Gina Ortiz Jones, 37, who won the Democratic primary runoff, is a former Army intelligence officer who served in Iraq. She and her sister were raised by Victorina Ortiz, a single mother who graduated from the University of the Philippines in Diliman and immigrated to the San Antonio area in the late 1970s as a domestic helper. While serving in the military, Ortiz-Jones kept her sexual orientation to herself because of the “Don’t Ask Don’t Tell” policy.

Checking off the boxes in her life, Jones is a woman, a Democrat, an Asian American, a veteran, and a lesbian.

“I’m very proud of my Filipino background,” Jones told The FilAm during a June 3 fundraiser at an East Village restaurant. “My mother is from Pangasinan. She is Ilocano, I am Ilocano.” Her mother is an educator in the Harlandale school district and works with children with special needs.

If she pulls out a win, Jones will join Virginia’s Bobby Scott as members of the U.S. Congress who are of Filipino descent.

Texas is a state where Republicans have ruled the roost for decades, but immigrants and changing demographics could change that picture. Jones is running in a district that spans the city of San Antonio in south-central Texas to El Paso on the U.S.-Mexico border.

Her opponent is Will Hurd, an African American Republican who narrowly won elections in 2014 and 2016 and used to work in the Central Intelligence Agency. He is seen as a nice guy whose voting record Jones has described as “awful” because he supports Trump’s anti-immigrant agenda.

The race, though, will not be easy because the district is a toss-up. Out of a total population of around 773,000, about 68 percent are Hispanic and 29 percent are white, according to the 2016 U.S. Census. Asians make up only 1.6 percent of the population. Hillary Clinton won this district by three points in the 2016 presidential election. In the 2014 election, only 115,000 voted, and this rose to 229,000 in 2016. As in many tight election races, turning out the vote is crucial to victory. 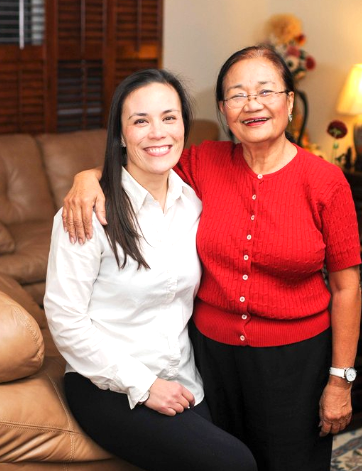 Her mother, Victorina Ortiz, from Pangasinan, is an educator in Texas’s public school system. CONTRIBUTED

In a year when Democrats could win control of the U.S. House of Representatives, Jones is part of the spearhead in a building wave of Democrats who could be swept into office in the U.S. mid-term elections in November. Her story is compelling because she came from very humble beginnings.

Jones got a college education by winning an Air Force ROTC scholarship to Boston University. She served in Iraq as an Army intelligence officer. She worked as a director in the office of the U.S. Trade Representative.

For a while, she thought she could work for the Trump administration. She found out she could not stand it and left.

Her strategy for winning is fairly simple. It is based on showing up in all of the 29 counties in her district to campaign for turnout and overcome Hurd’s incumbent advantage. 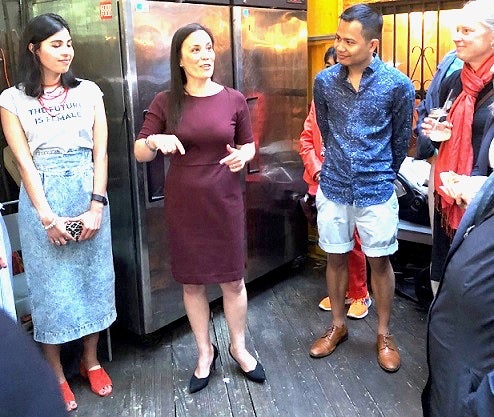 “We are being tested as Americans,” she tells supporters at a fundraising event in NYC. To her left is Aries Dela Cruz, Gov. Andrew Cuomo’s Manhattan Regional Representative. THE FILAM

Jones will focus particularly on the issue of Dreamers, the group of young immigrants brought to the United States as infants and concerned about their undocumented status. She said Hurd has been silent on the issue and has only belatedly thrown his support for the Dreamers.

“The Dreamers are a big issue” for the Hispanics who make up an overwhelming majority in the district. Jones is going to tie Hurd to Trump and his hostile immigration policies.

“I’ve been honored to serve our country in and out of uniform. I studied hard and worked hard,” Jones said. “We are being tested as Americans.”

If the Democratic Party is to win control of the U.S. Congress, she declared that “districts like this that are key to flipping the House.”

Asked about her chances, a confident Jones replied, “A hundred percent.”