From a crying girl at U.S. border to Danica May: The politics of cruelty 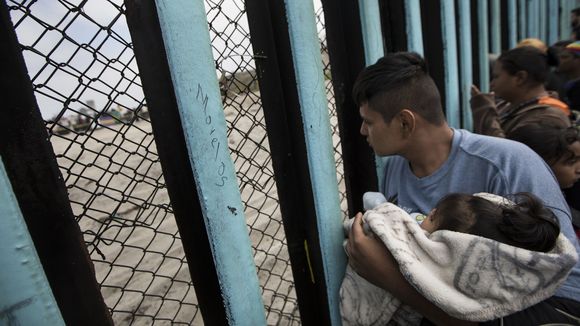 In this April 29, 2018 file photo, a member of the Central American migrant caravan, holding a child, looks through the border wall toward a group of people gathered on the U.S. side, as he stands on the beach where the border wall ends in the ocean, in Tijuana, Mexico, Sunday, April 29, 2018. AP PHOTO

In 1991, I watched the U.S. Border Patrol apprehend a little girl. I was then a journalism student riding along with border agents in San Ysidro, California, when they got the call that several people had just crossed illegally from Mexico. The immigrants were all almost immediately caught.

The girl looked like she was under 10 years old. She was with someone who looked like her father or grandfather. I never found out what happened to them. Did they apply for asylum or some form of legal status? Or were they eventually deported?

But I can probably speculate with some certainty, that the girl was not separated from the elderly man with whom she got caught.

The story would have been different today. Thousands of children have been separated from their parents after they either crossed into the US illegally or applied for asylum at the US-Mexico border.

Among the victims of this cruel campaign, a little girl who criedas she watched border agents patting down her mother.

The campaign was swiftly condemned worldwide, even a Trump and his allies tried to defend it with what most people have decried as brazen lies. Moved by the viral photo of the crying girl at the border, a Bay Area couple launched a fundraising campaign for the Refugee and Immigrant Center for Education and Legal Services, which provides low-cost legal defense to immigrants and refugees in Texas.

Their goal was modest: $1,500. But there was so much outrage over the Trump policy they raised more than $10 million in less than four days.

In an op-ed in the Washington Post, former First Lady Laura Bushsaid: “This zero-tolerance policy is cruel. It is immoral. And it breaks my heart.”

“Our government should not be in the business of warehousing children in converted box stores or making plans to place them in tent cities in the desert outside of El Paso,” she continued. “These images are eerily reminiscent of the internment camps for U.S. citizens and noncitizens of Japanese descent during World War II, now considered to have been one of the most shameful episodes in U.S. history.”

In many ways, the Trump policy is even more inhumane than the Japanese American internment, as the actor George Takei pointed out.

His essay was titled: “‘At Least During the Internment’ Are Words I Thought Never Utter.”

The good news is that the outrage, the protests have apparently paid off.

On Wednesday, Trump announced an end to the sadistic policy. It’s an unclear how undocumented children, many of them taken to the US to escape violence in their native countries in Central and South America, will be treated going forward.

But the Trump policy underscored how children can become the tragic and sad victims of the politics of cruelty, of an era when when tough-talking, thuggish leadership style has prevailed in many parts of the world.

That’s certainly true in the Philippines where Rodrigo Duterte is about to begin the third year of his blood-soaked presidency.

One person witness that milestone. Danica May Garcia would have been 7 years old this year. She was 5 when she became one of the early casualties of the brutal Duterte antidrug drive, a campaign in which children, as Duterte himself told The Guardian, can be “collateral damage.”