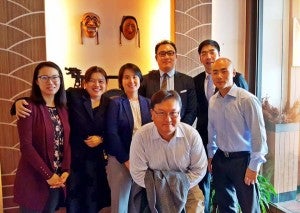 NEW YORK — When Dong Shik Park heard the news about Ick-joo Jee, the Korean businessman who was kidnapped and killed inside the main headquarters of Camp Crame, in the Philippines, the safety of his relatives there first came to his mind.

Park, whose older brother owns a golf driving range and lives with his wife and their two children in Cavite City, says he immediately called them.

“It’s crazy out there, and I’m scared for them,” said Park, 56, who currently lives in Queens, New York.

Then, according to his brother, many South Korean families in the Philippines have gathered together on different occasions since Jee’s death, making plans on what they could do to protect themselves.

Moving back to Korea?

Park had also been told that some are even thinking of moving back to South Korea until the probe into Jee’s case get settled. Others consider relocating to neighboring Asian countries where political conditions are relatively more stable.

“In my brother’s case, it’s challenging for him to just leave and abandon his business,” he said. “His kids also go to schools in Manila.”

As the news report about the kidnap-slay case of Jee reached the United States, many South Korean Americans, like Park, are feeling distressed and worried, especially those who have family and friends in the Philippines.

In Duluth, Georgia, where the population of South Koreans continues to rise in the last decade, Jee’s death has been a common topic iof conversations among Koreans.

In 2010, according to the U.S. Census, Georgia was a home to more than 60,000 Koreans, showing an 86 percent increase from the 2000 census data. Several factors, including jobs and schools, have spurred this population growth, reports noted.

“The way Mr. Jee got killed was very controversial, to say the least,” said Jong-won Lee, a law student at Georgia State University. “He was in prison when he died, so some Philippine authorities are likely involved. I would definitely feel scared if I live there.”

Filipinos may not feel the economic pinch right away, Lee added. But, in the long run, if South Koreans start leaving the Philippines, it could hurt the country’s economy.

Lee said: “Aside from Korean tourists, there are a lot of Korean restaurants, English-language schools owned by Koreans and many other Korean businesses in the Philippines.”

In 2014, according to South Korea’s Ministry of Foreign Affairs, about 90,000 South Koreans called the Philippines their home.  Attracted by low-cost housing and English-language schools as well as warmer climate, nearly 65 percent of South Koreans in the Philippines are business investors, immigrants and retirees, while about 35,000 are students.

The dramatic increase of the South Korean population in the Philippines was partly the result of the Special Resident Retiree Visa (SRRV) offered by the Philippine government. SRRV provides the option for foreigners to get permanent residency, multiple-entry visa or an indefinite stay in the Philippines.

But would Jee’s death spark a rift in the bilateral relations of these two countries?

“It is an isolated case,” said Mark Kim, a restaurant owner in Koreatown at the heart of downtown Los Angeles, California. “Filipino workers also play a critical role in South Korea.”

According to Yonhap News Agency, in 2016, there were about 45,000 documented Filipino immigrants — the 5th largest immigrant group — living in South Korea.

“You have to look at this incident like a two-way street,” Kim added. “I’m sure there had been a Filipino immigrant in South Korea who were robbed or mugged.”

The kidnap-slay case of Jee was the latest controversy that has shaken the Philippine National Police (PNP) amid Pres. Rodrigo Duterte’s war on drugs. Since the campaign was launched about seven months ago, more than 7,000 people have been killed in police operations.

Last October, according to initial investigation, Kyun Jing Choi, the wife of Jee, said that policemen abducted her husband in Angeles City on suspicion that he was peddling illegal drugs.

Choi also recounted that she was hoping that her husband was alive, reports added, because she paid his alleged kidnappers P5 million (about $100,000) in ransom.

However, she didn’t know that he was already strangled to death in Camp Crame and was cremated at a funeral home in Caloocan City on the day that he was abducted.

Last Jan. 26, the Philippine Senate opened its investigation of the kidnapping and killing of Jee.

Duterte apologized and assured that he would find those who are responsible for the killing of the South Korean businessman and that they will go to prison.

But other South Korean Americans were not surprised by Jee’s death.

“I read a lot of op-ed articles that point out why police would target him [Jee], and I personally agree with them,” said H.B. Cho, a reporter for Korean-language The Korea Daily. “If he wasn’t involved in illegal activities, why would he be singled out?

While he doesn’t condone kidnapping and killing, Cho says that some Koreans conduct illegal businesses in countries like the Philippines, where they think laws are lenient for foreigners.

Still, for Dong Shik Park, he advised his brother to sell his golf driving range and move back to Pusan, South Korea.

He added that many Filipinos think that South Koreans in the Philippines are rich — and this is the reason why they become a primary target for kidnap for ransom.

In 2014, The Korea Times reported that the Philippines emerged as the most dangerous country for South Korean tourists and expatriates. Crimes against South Koreans in the Philippines include 13 murders, 12 robberies, 678 thefts, 2 rapes, 12 physical assaults, 10 fraud cases, and (9 abductions).