Her long and painful road to a happy Father’s Day 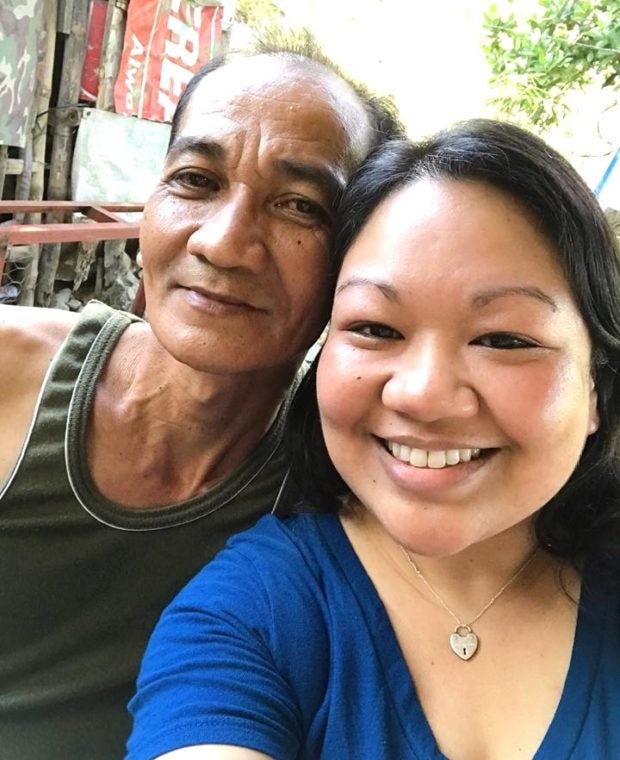 OAKLAND, California  — It is always said that one is fortunate to be leaving the Philippines to go to the United States and live there, but this proved to be tough on one daughter who had to leave behind her father and not see him for most of her life.

Joanne Boston was a baby when she was brought by her mother to the United States from the Philippines in 1983, weeks after former Senator Benigno Aquino was assassinated. Her father was not with them

“She made a decision right then and there that she wanted to give me a better life. She was young and she dropped everything she had there in the Philippines for me,” Joanne surmised.

Joanne’s mother remarried in the early ‘90s, and her dad also remarried and had his own family shortly after her mom left. She was raised by her maternal grandparents and plenty of aunties and uncles in San Francisco and Daly City.

The first few years were really challenging for the family, particularly for the young Joanne.

“We did not have the Internet or texting back then. Snail mail and that took forever to get to the Philippines and back. Time and distance were the main factors why I did not see him (my father). Eventually, they both decided to move on from each other and start their new families, I accepted the fact that I would not see him since my life was anchored in San Francisco. I suppose it was a question of ‘what is the point?’ I had so many amazing uncles and older cousins taking care of me,” Joanne recalled. 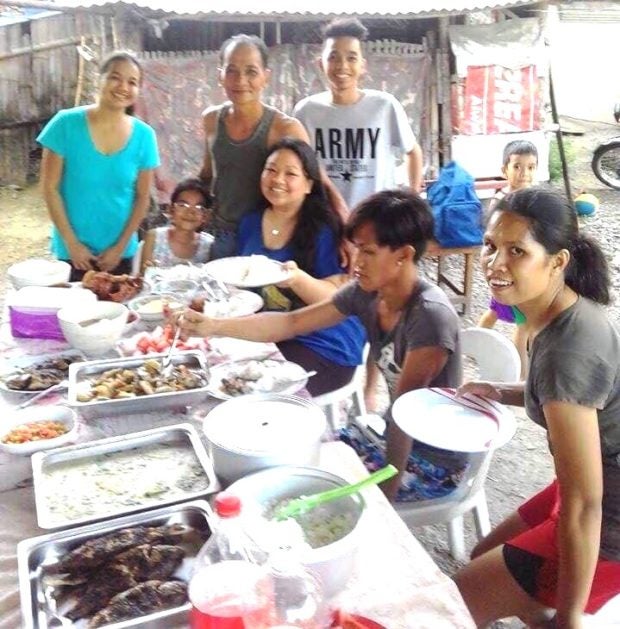 After a tearful reunion, the extended family partakes of the dishes prepared by Jude to celebrate the reunion of long-lost father and daughter. CONTRIBUTED

Life was supposed to move on for Joanne too, until, when she was in middle school, she found her father’s name while she was looking for her birth certificate for school registration. That for her was a surreal moment.

“When I was younger, it never hit me that I did not have my dad around. I thought a dad was a man who helped take care of you. My grandpa and my uncles essentially were my ‘dads.’ I had plenty of them! My Uncle Bill took me and his daughter (my cousin) to flea markets and fishing almost every weekend.  My Uncle Freddie taught me how to play the keyboard and we would sing and go out with his boyfriend. He taught me that love is love.

“My Ninong Joe would come over every Saturday and we would watch 49er and Giants games and then follow those up with WWF and American Gladiators. I was taken care of very well when I was a child. That is why I never ‘missed’ having a dad when I was a kid,” Joanne said. 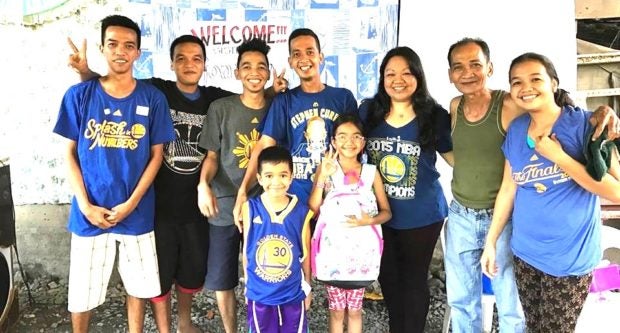 Joanne Boston (third from right) reunited with her father and seven siblings when she went back to the Philippines in 2016 as a Filipino Young Leaders Program (FYLPRO) delegate. CONTRIBUTED

It did not help that her stepfather died when she was only 11, forcing her mom to work 16 hours a day and be both mom and dad to take care of them. She felt she would open old wounds if she mentioned meeting her real father.

“So I never asked. I never wanted to upset my mom because she did so much for us. My mom, my hero. She was enough,” remembered Joanne. “When no one really told me that it was ‘okay’ to meet him, of course, I began wondering ‘why’ they never encouraged me. Was there an underlying secret no one wanted me to know? The more I thought about it the more I shunned the idea of meeting him because I just did not want to deal with it.”

That put the young Joanne in an awkward situation, knowing very little about her real father for a long time but also knowing that her father was in the Philippines.

“Truth was, I did not know what to feel. There is this ideal image of a father: always being there for their kids and doing everything in their power to make them happy and taken care of. Since I did not have that, it was hard to feel anything for him.”

Joanne confessed that she felt anger in many ways. “I think it is natural for someone who has been missing someone in their life to feel a bit of resentment. A part of me was absent. I knew all of my mother’s side, but that was all I knew,” Joanne explained. “I did not want to be in the spotlight, like ‘girl from America finally meets her dad.’ I did not want it to be a spectacle. I wanted it on my terms.”

She wished she had her dad during all those birthday parties, her first communion, or even while she was waiting for her prom date.

“I would have loved for him to be the protective type when I would introduce a boyfriend to the family. I would see my friends and how they had their fathers around. The sense of security was something I longed for. I had to figure that out on my own. Even at my wedding, I wondered how it would have been if my mom and dad walked me down the aisle,” Joanne looked back.

Soon, she started to feel a bit of shame that she had never reached out, especially since her uncles would mention every now and then how her father was a nice guy. Since communication was hard back then, she did not even know how to begin communicating.

“I always knew he wanted to see me. I knew there were attempts to meet me, but I had declined. Again, when I got to that age to make a decision to see him or not, I got scared. I was afraid to learn about who he was, what history he had, what baggage he carried or even worse, what resentment he had toward me and my family, what they were expecting of me. I did not want to face it,” Joanne admitted.

She would watch reunions on YouTube and ended up “a basket-case, sobbing so much. They were such happy reunions, but I was not sure if my potential reunion would be happy or sad.”

Even before Joanne got married, she had been introduced to her younger sister in 2009 through Facebook. She then began to acquaint herself with her many siblings in the Philippines, whom she grew to love as a wonderful family she could go back to in the Philippines.

“Eventually I made my way to the Philippines in 2011. Little did I know, my uncles showed my wedding DVD to my dad, so he was able to see it. My siblings asked me if I wanted to see him. Again, I did not want to feel pressured and I said, ‘thank you, but, no thank you.’ They were so gracious and completely understood why I felt the way I did and they never forced me to do anything I did not want to do. They are so amazing. I went back to the Philippines 2014 and I saw my siblings again. And again, they asked if I was ready. I kindly declined. Again, they understood,” Joanne recalled.

Finally, in 2016, she was chosen for the Filipino Young Leaders Program (FYLPRO), an immersion program in the Philippines for Filipinos born in the U.S

In May of 2016, she added her dad to her Facebook friends. This was the first time she got to see what he looked like and what he did for a living.

“It was an amazing moment. I conversed with him every so often over the course of four months. It was hard at first. I was actually very truthful and sometimes even borderline- mean to him. I told him how difficult it was without him. I defended my mom so much. I kept telling him that my mom was the best mom in the world – and he believed me.”

Her dad was always “so gracious and apologetic.” She got a lot off her chest and was finally getting to know him. “I was happy we were beginning to build a relationship.” 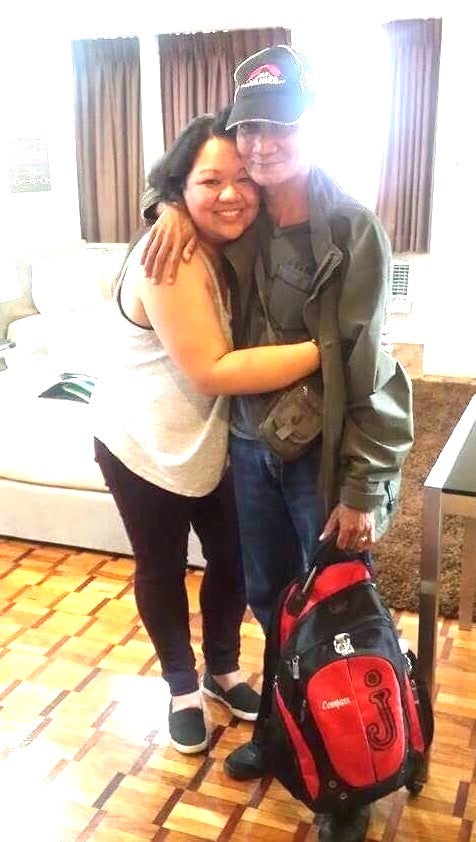 Jude Fortunato and his daughter Joanne Boston embrace before she leaves Manila to go back to San Francisco. CONTRIBUTED

As a FYLPRO delegate she finally got the chance to meet her dad, in her own way. She broke the news of her impending visit to her dad and promptly asked him to cook her favorite food of balatong and pinakbet.

When the day came for them to see each other, her brothers and cousins, who are tricycle drivers, saw her first in the market. When she told them she had finally decided to see their father, a cousin whisked her off to her shocked dad, who was not expecting that moment, even though he had worked all day preparing the dishes that her long-lost daughter asked for.

“When we embraced, we cried so hard. It was an amazing feeling to find my missing piece. He kept saying he was sorry, as if he felt he failed as a dad. I said at that point that I did not care and that we could just move on from this. We were going to start a new relationship. It was such a relief and it was so happy. I was thrilled to see all my siblings there. Prior to this trip, I did not even know I had nephews and sisters-in-law. All my siblings and my stepmom and dad were in one place. I was ecstatic. After the two minutes of crying, we ate as a family and sang karaoke. I truly felt that no time, not even 30 years, had passed. I had the best time with them,” Joanne vividly recalled.

When news got around that they met, people came out to tell her how happy they were for them. Even her mom told her it was about time for them to see each other.

“I want to go back to the Philippines in 2019. For sure, I would love to spend time with him. I tell my friends all the time about how amazing it is to know him now. We have so much in common,” Joanne said.

Her dad is a sergeant in the Philippine Army and he helps maintain the community there. He is also a cook and prepares boodle fights for his group. “He loves to serve his community (as do I). He loves to sing (as do I).”

Joanne sees many similarities between her and her dad, starting with their sense of humor. “I knew right away he was my dad. I could feel it and I could see it in his face. Trust me, the nose we have speaks the truth. He is my dad! We do not have the typical father-daughter relationship, but I am glad I finally met him and I am able to close this chapter of wondering who he is. I cannot wait to go back to the Philippines. I hope to cook with him also and meet those who he works with,” she exclaimed.

Joanne added that Father’s Day had been so hard for her year after year, and it was only in 2017 that she had her real dad, Jude Fortunato of Pangasinan, to finally acknowledge on Father’s Day.