OAKLAND, California — For the third time in four years, the Golden State Warriors and its legion of fans walked, strolled, paraded, and occupied the main street of downtown Oakland to celebrate another National Basketball Association (NBA) victory, this time with a 4-0 sweep of perennial opponent, Cleveland Cavaliers.

The crowd of loyal fans, some coming from other states, toasted the Warriors, which fast becoming a dynasty.

Notable additions to these items are specially designed yellow and blue-colored Warrior brooms being peddled for $20 by someone who himself was swept off his sidewalk makeshift stall by the crowd that came out to cheer for the champion team.

The sea of humanity in blue and yellow are out very early in the morning under the searing heat of the sun to again experience the electricity that every victory parade the Golden State Warriors brings. INQUIRER/Jun Nucum

And among the enthusiastic, at times rowdy, fans were Filipino Warriors diehards most of whom brought along the whole family to experience the joy of victory.

One privileged fan was Antoinette Pugeda of Hercules, California, who works in an Oakland building with an advantageous view of the start of the parade. She brought her 12-year-old son, Karl.

“I kind of expected the sweep of the Warriors after game 3 because they won by a big margin. I was here also last year when they won the championship and had the victory parade which was fun too. If the team stays intact, I think they will win the championship once again. They play so good together and they have that harmony when they play so I think they can build a dynasty,” Pugeda predicted.

“Even if they move out of Oakland, I will still follow them when they move to San Francisco because for me they don’t just represent Oakland but the whole Bay Area being the Bay area team. So, no matter where they go, I think the fans are going to follow,” she added. Visibly tired but relieved, the six Romero siblings from Bohol, led by sister Diding (in the back seat with cap), have an unforgettable experience back together again, to enjoy the Warriors victory parade. INQUIRER/Jun Nucum

Son Karl, who idolizes Draymond Green for being good and funny with his antics, thought that the championship series would have been a lot tighter if the Houston Rockets played for the championship instead of the Cleveland Cavaliers.

“I think we are going to be champions again next year because there will probably be more switches and the opponent would probably not get used to the changes right away. My favorite player maybe Draymond Green, but Javale McGee is my MVP,” quipped Karl.

Outside, in the crowd with a girlfriend, was Frederick Tecson of South San Francisco, who would have wanted the Cavaliers to win at least once. 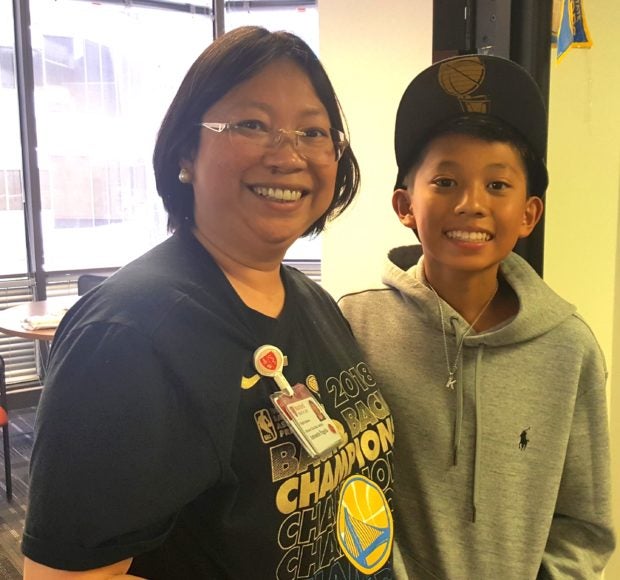 “The Houston Rockets gave them a tighter, better series (during the Western Conference) and whether or not Chris Paul was injured that they

would have had a chance to win the western conference title. Yes, they could have owned it.  But I still think with the way the Warriors played, they would have given them a big challenge and still win the series,” Tecson opined. He said further: “I thought that the final MVP was a tossup between Curry and Durant, but KD sold him that MVP with the game 3 performance. There’s a good chance that we’re going to be champions in the next years as long as they keep the same core group of players.”

Sernan Pascua with wife, Randee, and daughters, Alex, Romiel, Catalea, and Czarina, of Milpitas again packed their things for the victory parade in Oakland, just like in the first two championships.

“I don’t think the Houston Rockets would have given them a better, tighter championship series because if they only had role player swingman forward Andre Iguodala, the Rockets would have been defeated just the same in five games,” Sernan claimed. Randee added, “You got to know how important Iguodala is as a player. He would not have been finals MVP for no reason the first time. The games would have been over in five if Iguodala was playing.” 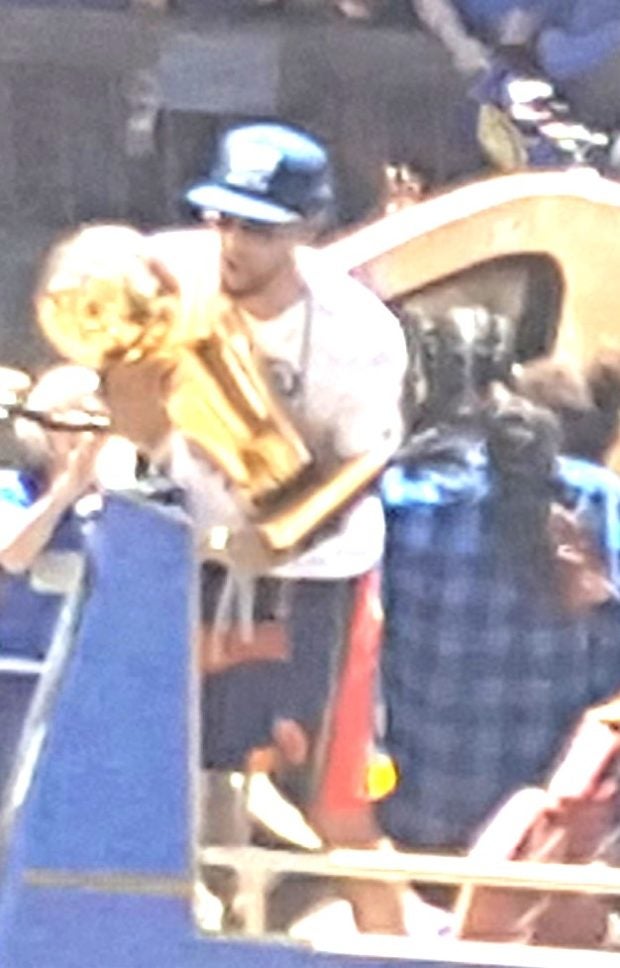 Their daughters’ favorite player is Steph Curry “who makes us inspired.”

Queen Ojeda and family from Lafayette were also in the victory party last year and believed that the Warriors would still sweep the championship series no matter who the other team was.

“I think it will still be the same result if the Rockets were the ones they fought in the Finals. It would still be a sweep,” Queen asserted with father Francis nodding. “We know the Warriors can do it and remain a champion in the next years with all their talent. They can take on the other teams no matter what buildup they do. We will be back here next year.”

Mother Jocelyn added that they were so proud of the Warriors “because they work so hard for their games. We have so much faith in them because of their intensity for the games they play.” 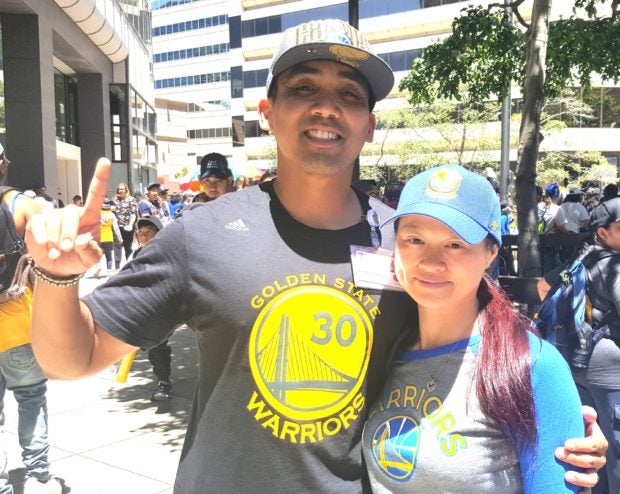 Frederick Tecson (left) thought a win by the Cavaliers would’v been good, but hoped for a sweep just the same. INQUIRER/Jun Nucum

Queen came with Louie Rosales Ojeda and younger brother, Reeve, who adores Curry but has Kevin Durant as his Most Valuable Player.

Seen inside the BART train after jostling their way back to the BART station were the six Romero siblings of Lila, Boho,l led by 78-year-old Serino Romero.

Sister Diding Romero, who came to the U.S.in the 1980s and currently resides in Union City, was happy that she was able to bring her newly immigrated siblings to the Warriors victory parade. 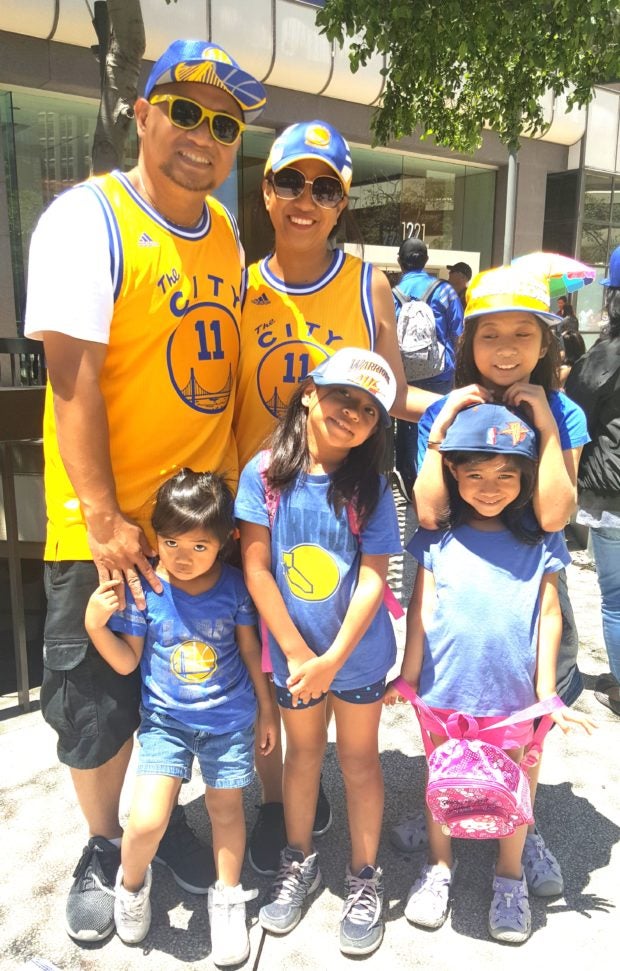 “This was something that I thought my siblings, three brothers and two other sisters who just came from the Philippines and themselves are basketball fanatics, would enjoy very much as a sibling family bonding moment,” Diding intimated.

She had to wait at least 25 years for her petition for them bear fruit. “I wanted to share with them the experience of having a champion team being toasted in a victory parade, for a team that I believe would be champions for a long time.”

The siblings sat inside the train full of boisterous Warrior fans, some of whom clearly have had a drink or two.