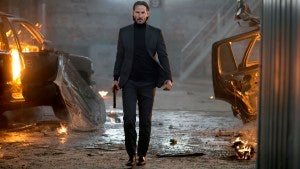 Legendary hit man John Wick (Keanu Reeves) is forced back out of retirement by a former associate plotting to seize control of a shadowy international assassin’s guild. Bound by a blood oath to help him, John travels to Rome where he squares off against some of the world’s deadliest killers.

After unleashing mayhem on the criminals who killed his dog, retired super assassin John Wick retrieves his beloved 1969 Mustang from the Russian mobsters who stole it, only to be pursued in a spectacular high-speed car chase through crowded New York City streets.

Returning home, John’s plans to resume a quiet civilian life are cut short when Italian gangster Santino D’Antonio (Riccardo Scamarcio) shows up on his doorstep with a gold marker compelling him to repay past favors. Ordered by Winston (Ian McShane), kingpin of secret assassin society The Continental to respect the organization’s ancient code, John reluctantly accepts the assignment to take out Santino’s own sister, Gianna (Claudia Gerini), the ruthless capo atop the ‘Italian Camorra’ crime syndicate.

Flying to Rome, John checks in at ‘Il Continentale’ headquarters, arms himself to the teeth and penetrates heavy ‘Camorra’ security to surprise Gianna in her bedroom. Leaving dozens of dead thugs in his wake, John flees Rome with trained ‘Camorra’ killers Cassian (Common) and Ares (Ruby Rose) in hot pursuit. Back in New York, John discovers that Santino has burned his home to the ground.

Seeking help from the mysterious ‘Bowery King’ (Laurence Fishburne), John employs Brazilian jiu-jitsu, Glocks and even pencils as he wreaks vengeance against those who’ve wronged him. Amid the carnage, John finds the strength he needs to defy the assassin’s code; but can he preserve his own humanity?

The relationship between Wick and Santino itself retains an air of mystery. Santino had promised him, “As long as you stay retired, I will never cash in this marker.“ Of course, John didn’t stay retired. So now, weeks after the first movie ended, Santino’s cashing in his marker because he’s been passed over by his own sister to run the ‘Camorra’ in Italy.

Ruling a criminal syndicate from her luxury headquarters in Rome, Gianna surprises John Wick when he shows up in her home to complete his deadly mission. John doesn’t want kill to Gianna because they’ve had a long relationship. Unfortunately, there are rules and you can’t break them. John learns that the hard way. So now he’s back in the life. Cassian is Gianna’s head of security and a trained killer who clashes with John Wick during taut showdowns in Rome and at New York’s ‘World Trade Center Transportation Hub’. John Wick and Cassian are rivals, but they also respect each other. Whether it’s in sports or music or as hit men, when someone’s great you’ve to show them respect. You might think Cassian is just the heavy because he’s chief of security. But from his first entrance, you can see he’s witty and there’s a sophistication to him that you don’t get in a lot of people that do security. Just the way he calculates and moves, you can see his intelligence come through.

The story of “John Wick: Chapter 2” is the journey of a complicated hit man struggling to protect the kinder, gentler self he embraced after retiring from the business, but unable to do so because of a debt he has accrued. John Wick has given a marker to this character Santino. According to the rules, if the bearer of the marker comes to you and wants to cash it in and you don’t do what they want, you die. If you kill the bearer of your marker, you die.

So John has a problem. In the assassin persona, he doesn’t feel remorse. The difference is that John Wick used to fight for other people. And now John Wick is fighting for his own independence. “John Wick: Chapter 2” injects a gritty new dimension to the Wick universe in the form of ‘The Bowery King’. The cryptic assassin rules a network of seemingly homeless killers biding their time on the streets of New York.

‘The Bowery King’ and his forces live among us in the shadows and we don’t even realize what they do,” says Iwanyk. He used to be part of John’s world but now ‘The Bowery King’ has decided that trying to impose discipline on killers is nonsense. He believes the world is much more chaotic, as if everything’s going to come down and burn around us. When John has to find solace and guns, he turns to ‘The Bowery King’. These aren’t any of his people, and his relationship to John Wick is a long one. They’ve a history that’s not particularly good and that creates tension when they first come face to face.

A surprise hit in 2014, John Wick struck a chord with audiences who yearned to see Keanu Reeves return to full-blown action mode. Earning cult status for it’s hyper-kinetic take on classic martial arts and gunplay. More action, a bigger scope and a deeper dive into the title character’s internal struggle. The second film expands the underworld, introduces a new element. In the original we had the assassins guild known as ‘The Continental’, now we’ve added an association called the ‘High Table’, where all of the different organized crime groups from around the world have a seat.

At the same time the film satisfies both male and female fans, as well as audience members who don’t usually watch action movies, by giving them all an emotional way into this movie. There are lots of incarnations of bad guys and locations. This story feels bigger and badder than the first one, while still keeping it emotional. For a hit man, the way Keanu Reaves plays him, Wick generates enormous empathy and the film wants to make sure the journey in our sequel kept audiences rooting for him.