Pnoy to Duterte: From embarrassing to disgraceful 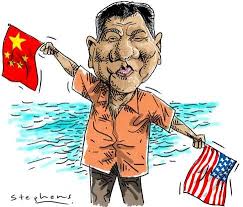 Given our history as a nation repeatedly conquered and colonized by foreign powers, it’s disconcerting to see a Philippine president and top government officials publicly seeking the approval or, worse, the protection of another country.

One of the lowest points of the his administration happened in 2012 when amid rising tensions with China in the West Philippine Sea he told Reuters that his government was considering asking the U.S. to send spy planesover the disputed areas, apparently based on his belief that, of course, Uncle Sam will fight for and defend the Philippines. He later had to backtrack on that statement.

A few months later, during a meeting of ASEAN leaders and President Barack Obama, he called on the US to be involved in the international discussions over the South China controversy. And then his own armed forces chief of staffeven publicly praised the United States, the country that once dismissed Filipinos as “little brown brothers,” as the Philippines’ “big brother”

Fast forward to 2018. From occasional embarrassing statements under Aquino, we now have wave after wave of stunningly disgraceful pronouncements under Duterte, in the most jaw-dropping display of international ass-kissing in Philippine history. In just the last three months, Duterte has essentially declared that he can’t do his job as Philippine president without China’s help: “More than anybody else at this time of our national life, I need China,” he said on March 9.

As Bloomberg reported, he even declared his love for Chinese President Xi Jinping. And that Duterte apparently expects Xi Jinping to love him back. After all, China is his protector. “The assurances of Xi are very encouraging: we will not allow you to be taken out from your office and we will not allow the Philippines to go to the dogs,” Duterte said in a speech.

He told police to just shoot suspected criminals and not worry about due process and human rights. He essentially told soldiers it’s fine to rape women in Mindanao, and that they should shoot women rebels in the vagina.

What about China which has become aggressive in claiming territory that clearly belongs to the Philippines? Well, that’s another story.

“What will we arm ourselves with if there’s a war?,” Duterte asked earlier this month. “Will we resort to slapping each other? I couldn’t even buy myself a rifle. It was given to me. So how will we even fight with the Chinese?”

In fact, Duterte, who inspired a modern-day mass slaughter and who routinely uses foul language in responding to his critics, thinks that in dealing with an aggressive neighbor, meekness and humility are the best approach.

The irony for many Filipinos like myself who have been hoping for a president who would finally break free from the “America is our big brother” mentality, is that the country ended up with a leader who proudly proclaims, “Beijing is my protector. I just have to be meek and humble .. para maawa sa akin, (so it will have mercy on me).”