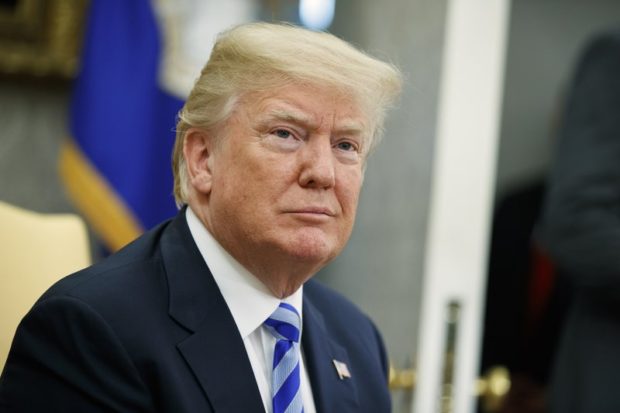 President Donald Trump listens to a question in the Oval Office of the White House in Washington. Trump’s hard-line views on trade, a staple of his message long before he entered politics, are beginning to collide with the cold realities of global geopolitics. Trade talks on China and the North American Free Trade Agreement have hit stumbling blocks, posing a challenge for a president who vowed to make trade deals more equitable for the United States during his 2016 campaign and famously tweeted that trade wars are “easy to win.” AP PHOTO

WASHINGTON — President Donald Trump’s hard-line views on trade, a staple of his message long before he entered politics, are beginning to collide with the cold realities of global geopolitics.

Trade talks on China and the North American Free Trade Agreement have hit stumbling blocks, posing a challenge for a president who vowed to make trade deals more equitable for the United States during his 2016 campaign and who famously tweeted that trade wars are “easy to win.”

Trump’s trade agenda — at least lately — has not been so easy.

After threatening China with $150 billion in tariffs, Trump’s administration has suspended plans to impose the tariffs for now and the president tweeted Wednesday that a “different structure” would be needed in the trade talks involving the world’s two largest economies.

The president has bemoaned the massive U.S. trade deficit with China — $337 billion last year — as evidence that Beijing has been complicit in abusive trading practices and outsmarted his predecessors.

Pointing to a pause in the trade dispute, the administration pointed to China’s plans to “significantly increase” its purchases of U.S. goods and services and make “meaningful increases” in U.S. exports of agriculture and energy products. Financial markets, wary of a calamitous trade war, were relieved.

But Beijing did not agree to any specific dollar amounts, despite the Trump administration’s push to lower the U.S. trade deficit by at least $200 billion. And doubts remain about whether China will address allegations the Chinese engage in cybertheft of trade secrets, force U.S. companies to transfer some of their technology in exchange for market access or back away from its China 2025 plan to dominate emerging technologies.

“Chinese r laughing at us again. They have never delivered on 1 promise in the past. Appeasement is the devils friend,” tweeted Dan DiMicco, a former Nucor steel chairman and trade adviser to Trump’s campaign and transition team, last Monday.

Separately, on Friday, the U.S. reached a deal on ZTE Corp. that will allow the Chinese telecommunications giant to remain in business. Under the deal, ZTE will oust its management team, hire American compliance offers and pay a fine — on top of the $1 billion it’s already paid for selling equipment to North Korea and Iran in violation of U.S. sanctions. In return, the U.S. Commerce Department will lift a seven-year ban on ZTE buying components from U.S. companies. The ban, imposed this month, threatened to put ZTE out of business.

Trump said earlier that a resolution would help U.S. firms that supply ZTE with components, but members of Congress, including several Republicans, warned that the U.S. is being too lenient on a company that has violated U.S. sanctions.

“ZTE presents a national security threat to the United States — and nothing in this reported deal addresses that fundamental fact,” said Sen. Chris Van Hollen, a Maryland Democrat. “If President Trump won’t put our security before Chinese jobs, Congress will act on a bipartisan basis to stop him.”

Trump’s team, meanwhile, has hit an impasse with Canada and Mexico on negotiations over NAFTA. The president has sought to overhaul NAFTA as a way of returning automobile production to the U.S. and reduce America’s trade deficit with Mexico.

But the talks are running into the complications of Mexican elections in July and the U.S. midterm elections in November along with a dispute over rules for car production.

Seeking leverage, Trump’s administration launched an investigation into whether tariffs might be necessary on car imports, based on national security concerns. The potential penalties could affect Mexico, Canada, Japan and the European Union.

The administration used a similar Commerce Department probe to impose tariffs in March on imported steel and aluminum.

But auto manufacturers said they didn’t push for the auto investigation, and members of Congress questioned the validity of the probe.

“The Honda Accord is not a threat to our national security,” said Rep. Jeb Hensarling, R-Texas, hours after joining Trump for a bill signing at the White House. But he added that “taxing it with trade tariffs is a threat to the economic security of millions of hard-working American families.”

Will press for better deal

Stephen Moore, a former Trump campaign adviser and visiting fellow at The Heritage Foundation, said Trump remains focused on how the trade policies affect the financial markets and economic growth. But he expects the president to continue to press for a better deal with China.

“As a long-term strategy, I don’t see him backing down in his demands on China,” Moore said.

The trade talks with China have come against the backdrop of Trump’s efforts to hold a June summit with North Korean leader Kim Jong Un, which the president said Friday could get back on track after he nixed it a day earlier. His attempts to push Kim toward denuclearization have required the cooperation of China, something the president acknowledged to reporters earlier in the week.

The president said alongside South Korean President Moon Jae-in, prior to this week’s uncertainty over the Singapore summit, that he has a “much bigger picture” in mind as he considers China trade, a reminder that his trade policies are no longer a matter of campaign rhetoric.

“I’m also thinking about what they’re doing to help us with peace with North Korea. That’s a very important element,” Trump said. “So we’ll see how it all works out. But in the end, it will work out. Can’t tell you exactly how or why, but it always does.”